vs Arashi wasn't so much a show as an extended plug for whatever film, album, or Johnny's band needed promoting at the time.
It was an hour-long show that contained about 15 mins of action, 15 mins of commercials, 15 mins of vacuous chat, and 15 mins of PR. Best watched with your finger hovering over the Fast Forward button!

Hey guys, woke up extra early today cuz i gots a test... oof... well just recognized i never posted this amazing song (i was surprized😂😂😂) so today i am posting Kore Wo Izon To Yobu Nara by Mejibray.

Edit: looked back far enough and saw i did so repost i guess

Jhopesstrawberry said:
Hey guys, woke up extra early today cuz i gots a test... oof... well just recognized i never posted this amazing song (i was surprized😂😂😂) so today i am posting Kore Wo Izon To Yobu Nara by Mejibray.

Welp today I actually got good news. Yoshiatsu, the former singer of Dadaroma (one of my favorite bands aghhhhh), has started a new band Fukuro. XJKKXOSJXNSKDK DO YALL KNOW HOW HAPPY I AM?
Anyways, now suggesting 「いつかは死んでしまう僕らは」"We will die someday" by Fukuro!!!!
*Old picture of Dadaroma 🥺⬇️* 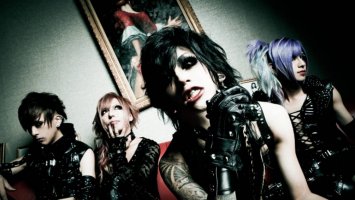 Hey guys! Saw a fun tiktok on this song so today I am suggesting racing into the night by yaosobi.

Jhopesstrawberry said:
Hey guys! Saw a fun tiktok on this song so today I am suggesting racing into the night by yaosobi.

Very gooood, it seems this song is sill blowing in Japan lol, a gem (this song made me learn how its night in Japanese, so good)
日

Some B'Z now, this is one of my fave, actually the whole RUN album is my favorite by them so far, they were so accurate in that one 🤯

(The vocals are a bit low volume since its karaoke, for somereason I couldnt access a normal version on Youtube...... hope they dont avoid the platform like most of the Johnnys groups do)
Last edited: 2 Oct 2021
日

One Ok Rock, needs no introduction

This song and video are just masterpiece, underrated

Another good one, by Bump of Chicken

Not a suggestion but I can't tell y'all how happy I was to know that most Japanese karaoke has little hiragana characters over the kanji! Im probably gonna be singing so much Japanese karaoke songs now😭😭😭💕💕💕

Thats so good, besides being GREAT to learn！！！ And also meeting new songs along the way, win win

Lemme put y'all on a lil somethin somethin...
So y'all remember Deadman right? You know, the amazing vkei band that was mostly popular around 2000-2006, mostly known for their songs "follow the night light" and "additional cause for sorrow", and were also known for popularizing the Nagoya Kei subgenre of visual kei.... Yeah, those big guys.
Welllllllll it's been a couple years since 2006, and even though mako (the vocalist) and the guitarist had in fact started performing again in 2019, they really haven't done much until NOW. They have decided to bless us with a track after a lonngggg time of waiting and will release it in 2022. Hah, I just know 2022 is gonna be a good year. Isn't it weird how all these vkei bands are coming back from what seemed to be a never-ending sleep from the 2000s? First Dadaroma, now Deadman? We can never get enough can we? The little vkei/jrock fandom on Tiktok are growing, and with that is more fans, which is more money, and more need for information😌 (cough cough, hopefully a bystander seeing jref). Anyways, grab bookoo food, hold on for this crazy end of 2021 ride, and enjoy this teaser😜 NOW WHAT WAS I TELLING YALL?!! Its one after another I swear to God. A dir en grey member AND A Larc En Ciel member?!!!! This is gonna be bomb!!!!!! I believe I have a dir en Grey song called Yokan on the first page of my music suggestions and many Larc en ciel Songs in my recommendations. Kyo is such a strong and amazing vocalist. Wow... 2022 bringing some good music and I'm living for it.

So here's a lil fun 90's song: Crash by Penicillin babyyyyyy💕💕💕💕 have a good Tuesday guys!

More information on the new band: Here's a litle winter song for you guys since it's December! ⛄️❄️ It's Winter, again by Glay.

Hey guys today is Wednesday. I've had testing everyday since Friday and today😞👆 but I have a good song to hype me up! Today I'm suggesting Samhain by Leetspeak monsters.

So our good old Gackt has another rumor about him going around. People are saying he has a foreign baby in Canada and had to go back to Japan because of tax invasions so 😭😭😭can y’all believe how many people actually believe this🙄 in honor of gackts fake foreign child I play Missing by Gackt.

It's tough to know: at one point he was portraying himself as a real estate guru in Malaysia. He was somehow involved in building high-end properties in Malaysia, and selling them to Japanese clients. So he would definitely be on the radar of the tax agency. But he's not stupid. He would be well aware of how to structure his companies and his income (I think). Anyway, he seems very smart.

To make sure this thread stays on track, I offer the following: Not Japanese music, but the singer Rei is from Japan and this group she's in should do very well in the future. Two weeks out and already 40M+ views.

Hey guys it's Friday and I'm tired. Testing is done with and I'm so ready for this Christmas break. Today I am suggesting I'm in a Coma by DEAD END.

Hey guys it's super rainy today on this good ol Saturday. Anyways, today I am suggesting Raven By Mejibray.

I found another band! So today I am introducing la fin by velvet eden.