Alright let's start a new version of this.
Rate the avatar from the person above 1-10.

Only a 5 , I'm jealous that you look so young and have all your teeth and hair.

8. Interesting to a non-American.

5. It’s a visually interesting image but I can’t figure out what it is on iPhone without clicking on the larger version.

7. A bit "busy" and overly complex for my liking given the small display area, but it's still clearly distinguishable, and there's something inspiring and uplifting about the imagery of a young child being fascinated with a vast world that he(?) one day hopes to explore.

P.S. Full disclosure: recently I've been considering switching my avatar up for a change of pace, and the evaluation I receive here may factor into my decision a bit.

7. Simple but clear. A bigger smile would be nicer

Yeah I'm thinking of changing as well as the photo is from about 8 years ago.... Still have my hair and teeth though.

How does this game work if someone posts twice? I suppose I'll just continue to follow the rules...

8
The greyscale image is stylish, your goatee and black shirt look quite dapper, and unlike Uncle Frank, I still have all my hair and teeth, too, so I have no reason to be jealous.
(To Uncle Frank: Just teasing, of course. Don't shoot! )

8 , looks like the type of thing people join JREF for , asking what it says. As a side note on JREF history , years ago avatars became a hot item. For a while , everyone were changing their avatars quite often , trying to make them more interesting. I think I changed mine about once a week back then. Then all of a sudden , animated avatars were the in thing. I even bought an avatar making program so I could design my own. I have an old external hard drive still from years back and when I looked at it the other day , it has hundreds of avatars I used back then. Making a JREF avatar by the rules back then was really a bit complicated. They had to be a certain size or the JREF program/rules wouldn't allow them to be used. The animated ones could only contain a certain amount of mega-byte size or they wouldn't load. I also believe there is another thread like this one from years ago that was popular.

(I feel guilty posting here so many times, but I wanted to reply to Uncle Frank and it's too late to edit my previous post, so...)

6.5
I want to rate it higher, as state flags (and flags in general) are rather fascinating to me, but the bright red is a bit jarring.
Just personal taste, but I prefer the subdued blue background of the flag itself.


Uncle Frank said:
As a side note on JREF history , years ago avatars became a hot item.
Click to expand...

The history lesson is fascinating and much appreciated!
Animated avatars are one relic of the oldschool internet days that I certainly do not miss.

___
P.S. for Frank and anyone else curious: my new avatar is taken from the label of one of my favorite brands of Japanese sake (日本酒).
The reading of the characters is the same as my username.

6.
it’s tasteful, and the color scene is nice, but it doesn’t give insight to the user. I think a lot of the avatars shown here so far give a clearer point of view, for better or worse.

8. Own made avatar is cool!
Would give it a 9 if he would have a smile.


Talking about avatar sizes, remember that we had different sizes especially when you just started. Was pretty happy that I could finally get a larger one.

10 because you created it and it also seems fitting during this time of the virus. I always think of the painting called "The Scream" when I see your avatar. 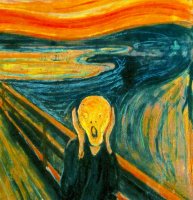 10+ because you are not hiding behind an avatar and because you were such a lovely couple! (I hope UFSI won't be reading this)

Gone are the days when members were striving for account upgrades to get larger avatars or use blinking text in their signatures...

Seriously though if you guys are going to play this way you need to put the avatar inside your post, otherwise there's no way to even know what picture people are commenting on.

Help!! I Want A Moving Avatar!!