I'd like to share a TimeOut article on the Nakagin Capsule Tower (中銀カプセルタワービル), a 1970s building designed by Kurokawa Kisho that consists of 140 individual capsules. The article displays the interior of several capsules. No internet and no hot water. On the edge of Ginza stands what looks like a precarious heap of run-down washing machines. The Nakagin Capsule Tower, comprising 140 individual capsules, was once a beacon of modern architecture, but is now a relic of 1970s Tokyo. The building is in need of costly repairs, and according to Asahi Shimbun could soon be sold, making its future uncertain. But for now, you still have a chance to see it from the inside and get a glimpse of what it’s like to live in a prime example of Japanese Metabolist architecture.
Click to expand... The architectural wonder of 1970s Tokyo offers building tours and even a month-long stay in a capsule apartment
www.timeout.com I know I've seen that building but I never realized what it was.

Two weeks ago, the Guardian had an article on the 'Nakagin Capsule Tower'. It seems it's slated for demolition, however, a preservation group has received inquiries from museums in the US, Britain, Germany, France and Poland hoping to play their part in protecting the legacy of Japan's short-lived experiment with metabolism.

"Europeans understand the need to preserve buildings like this, whereas Japan is still guided by a pull-down-and-rebuild mentality," says Maeda, who resolved to buy a Nakagin capsule while gazing at the building from his old workplace.
Click to expand... When it was built in 1972, it was the capital’s only example of the metabolism architectural movement – but time has caught up with the structure

The last residents of the Nakagin Capsule Tower moved out yesterday, clearing its path for demolition. What a shame.

It's final: Nakagin Capsule Tower will be demolished next month. Some of the capsules will be preserved though.

The futuristic-looking Nakagin Capsule Tower in Tokyo will be demolished next month, its owners say, after a long battle to save the building and its space-age units. The tower, completed in 1972 and designed by renowned architect Kisho Kurokawa, is a landmark of the Metabolism movement, which aimed to create sustainable living spaces that people could take with them if they moved. Its dozens of capsules with large round windows were designed to be individually removed and replaced, but have instead remained there in an increasing state of disrepair. The owners plan to extract some of the white cuboid capsules before demolition begins on April 12, Tatsuyuki Maeda, who refitted several of them himself, told AFP on Tuesday. "We don't know yet how many capsules we'll be able to save, but we plan to repair some deteriorated parts and refurbish them to send them to museums, for example," said Maeda, who bought his first capsule in the tower in 2010. "It's not a complete end to the building, and I'm looking forward to seeing the capsules' new life."
Click to expand...

The futuristic-looking Nakagin Capsule Tower in Tokyo will be demolished next month, its owners say, after a long battle to save the building and its space-age units. The tower, completed in 1972 and designed by renowned architect Kisho Kurokawa, is a landmark of the Metabolism movement, which...

Some pictures of Nakagin Capsule Tower taken this morning. Lighting conditions were poor, but you get the picture. Some scaffolding has been deployed, but the capsules are still intact. 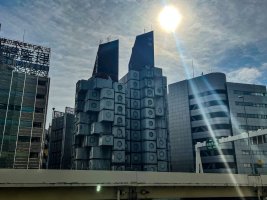 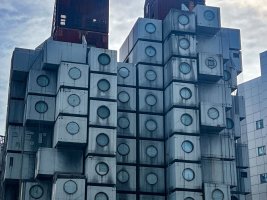 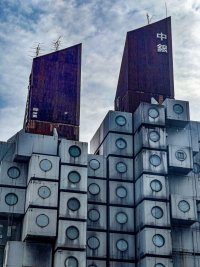 I only see a white square. Petaris said:
I only see a white square.
Click to expand...

thomas said:
Some of the capsules will be preserved though.
Click to expand...

Weird, it shows up now. Must have been on my end.

Yuri Kageyama on the fate of the Nakagin Tower, the architect's original plans and intentions and the failed efforts of the last tenants to save the capsule building. Kurokawa Kisho developed the technology to install the units into a concrete core shaft with four high-tension bolts. The capsules were designed to be detachable and changed to new ones, or recycled every 25 years. Sadly, this never happened. Japan's landmark capsules coming down to sit in museums

TOKYO (AP) — Nakagin Capsule Tower, a building tucked away in a corner of downtown Tokyo that is made up of boxes stacked on top of each other, is an avant-garde honeycomb of science-fiction-era housing long admired as a masterpiece.

The Nakagin Capsule Tower Building, a masterpiece in Japanese architectural history, was completed in 1972. And, As of 2022, the demolition of this building has begun. This book is a collection of over 400 photographs of the 114 capsules. The Nakagin Capsule Tower Building, a masterpiece in Japanese architectural history, was completed in 1972. And, As of 2022, the demolition of this building has begun. This book is a collection of over 400 photographs of the 114 capsules.