I was hoping I'd be able to visit my family in Europe soon, but...

In the face of demonstrations across much of Europe protesting tough COVID-19 measures over the past days, authorities on Monday pleaded for patience, calm and a willingness to get a vaccine shot in the arm as infections spike upward again. And for those who abused the protests to foment violence,… Coronavirus in Europe: the latest counts, charts and maps

Preparing for the sixth wave: the Nagoya Institute of Technology used AI to establish what the expected next wave will look like.

But experts are wary the sixth wave will be worse than the fifth. The central government is also assuming it will have double the infectivity of the delta-fueled fifth wave. Sixth wave preparations include creating a system by the end of November that can ensure 37,000 patients, 30% more than in the fifth wave, can be hospitalized. Amid this, predictions by an AI developed by Professor Akimasa Hirata's team at Nagoya Institute of Technology are attracting attention. To make the estimate, the team made the AI memorize vaccine efficacy, past outbreaks' cycles, the schedule of major vacations in Japan and other factors. For Tokyo, the AI predicted that new daily infection cases would continue to be 50 or less for the rest of the year, with increases starting around the end of 2021 due to year-end parties and people returning to their hometowns. Even so, it estimated the peak would be 370 in mid-January 2022.
Click to expand... Following the example of the UK, Japan decided to impose travel restrictions for travellers from South Africa, Botswana, Eswatini, Lesotho, and Namibia over concerns over the spread of a coronavirus variant known as B.1.1.529.

The move, which takes effect Saturday, comes amid mounting concerns over the spread of a coronavirus variant known as B.1.1.529, which infectious disease experts warn could be more contagious than previous strains or render existing vaccines less effective. Britain has temporarily suspended all flights from the six countries in southern Africa, and the World Health Organization has called a special meeting to discuss the variant. After leaving the government-designated facility, travelers from South Africa and the nearby countries will need to spend a further four days in quarantine at home to ensure they are not infected. Previously, they would have been allowed to spend all 14 days at home.
Click to expand... Japan to restrict travel from S. Africa over variant - The Mainichi

I guess it will never end. 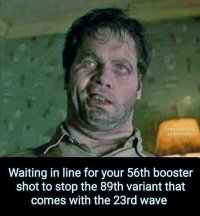