Ryan's back from Japan!

And the winner is...

... Ryan Noble. Ryan, we would like to congratulate you on behalf of Genki JACS and Japan Reference (JREF)!

And here are a few words from Ryan:

My name is Ryan Noble, and I feel like the luckiest person in the world right now. Did I really just win four weeks of Japanese lessons in Japan? Insane. Amazing. Insane again.

I've lived in the United Kingdom my entire life, and always wanted to explore more of the world, and maybe even live elsewhere for a year or two (or longer, if I loved it). Then life happened, as it always does, and I found myself working hard, from university to full-time work, with no time to even think about travelling. It was the exact same for learning a language, although this was more about my own lack of dedication. Until I started learning Japanese.

I've loved anime and Asian films – especially horror – for years now, and it sparked an interest in Japan and its culture. Before long, I wanted to learn the language, too. I booked myself onto a weekly course towards the end of 2015, and studied like crazy in my own time to learn hiragana and katakana so that I wouldn't be the worst student in the class. Luckily, it actually made me feel like one of the most confident and I was encouraged to jump up a few classes in the following courses. That definitely knocked me down a peg or two, as lessons became much harder, but I also felt like I was learning much more from them. However, in all this time, I still haven't been able to go to Japan.

I finally decided I was going to stop waiting around for the perfect time to travel to Japan, or the perfect person to go with, and explore Japan alone for two weeks or so on my own. Just when I was ready to start planning, I received an email from JREF saying that I'd won this competition... Did I mention how insane that is?

So, instead of planning a two-week holiday in Japan, I'm now about to start planning an entire month in the beautiful country, where I'll hopefully be able to improve my Japanese surrounded by the people I want to be able to speak to. Sugoi!

I'll be blogging about my experience while there, and I'm also sure to be tweeting the entire time here: https://twitter.com/TheNobleGaming. 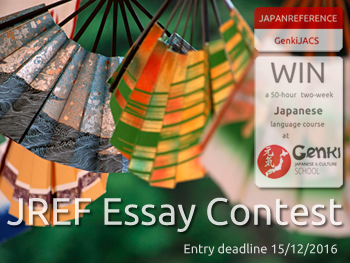 Japan Reference (JREF), in collaboration with Genki Japanese Language School, is proud to announce an Essay Contest on one of the following topics:

• What aspect(s) of Japanese culture intrigue(s) you the most?

• Tell us about an interesting interaction you have had in Japanese or with a Japanese person.

• Tell us about a situation where you learned something new or interesting about Japan or Japanese culture (perhaps through a misunderstanding of some sort).

should be in English language and must be no fewer than 600 and no more than 1,200 words in length, one entry per entrant and solely your work. By submitting your entry, you agree to the publication of your essay on the Japan Reference (JREF) website.

two weeks of free classes (25 hours per week) of any Japanese Plus Course at Genki Japanese Language School!

You choose one of two locations: Fukuoka or Tokyo, as well as

one of the following Plus Courses:

• The course includes the textbook
• any level of learner accepted
• prize is valid for 1 year from selection of winner
• starts any Monday (exception: beginner students start first Monday of each month)
• extra costs: student must pay for flight to Japan, accommodation, travel expenses, living expenses

please submit your essay to the following email address (by replacing "at" and "dot" with their respective symbols):

All entries should be submitted by December 15, 2016, 23:59:59 Japan Standard Time. We reserve the right to extend the entry deadline of the contest when deemed appropriate.

Genki Japanese Language School is an accredited and award-winning Japanese school teaching communicational study abroad courses, learning the Japanese language and culture in a relaxed and friendly environment. It is located in the center of the biggest city in South Japan, Fukuoka. Classes are small, and focused on Western students' needs.

GenkiJACS is the most popular Japanese language school for Western students in Western Japan!