Hi there,
First of all, I’m newbie around here and i can not write not read a word in japanese, sorry ‘bout that, but have a lot of curiosity about kanji symbols and writing.
I have a question about writing dates in kanji. In fact, writing birth dates (don’t know if that makes any difference from ordinary dates).
The date i want to write down is 27th september 2014, and after a little research have these alternatives. Don’t know if any of these is used in everyday writting, not even if they are correct. They are only what i’ve supposed it will look like. Will appreciate if someone can point me out which one is correct (if any) and in what kind of context they could be used. Can they be present in horizontal and vertical writing?. What will be the correct way to write with kanji/daiji symbols vertically?!:

Thank you in advance!!!
Victor

There are multiple ways to do it. The choice depends in part on who your audience is, and how easily read you want it to be.

Because it is a date, and not a monetary amount, you can skip daiji, although they are sometimes used in this case as well.

Because it is vertical writing, using the Japanese era name is more suitable than using the western year notation.

If you use kanji for the numerals, it is better to write them as numbers rather than as individual digits (e.g. 二十六 instead of 二六).

This picture I found on the web shows a typical and nice way to write a date vertically:

#1 is most common. Actually, #1 is almost equally as common as the traditional era-name (nengo) system.
Vertical writing in kanji is appropriate if the context allows or demands it. Vertical writing with combination of arabic letters and kanji, while not entirely unusual, can be difficult to read or understand.
#2 not common, but can be seen on official documents or certain bureaucratic papers.
#3 not common. In fact, virtually non-existent.
#4 non-existent (some variant of this exists on paper currency).
#5 extremely uncommon
#6 non-existent
#7 non-existent.

Daiji are almost only encountered on currency, historical texts, or specialized contexts (receipts for some big-ticket items).

(Written before I saw Joadbres's reply, which is also correct.)

Your answer bring lot of light. If i did not misunderstood you, the correct way to write it in vertical kanji is:
平
成
二
十
六
年
九
月
二
十
七
日

Thank you very much!!!

Yeah, the bottom version on your post above is so unusual, looking at it now I think you would never encounter this style nowadays. We see it on pre-Showa things, but I think it would be very rare to see this style.

Just another question. Would it be inapropiate or wrong to specify the weekday at the bottom/end?!
It’s a Birth Date what i’m trying to write, and it makes sense (at least in certain contexts) to write down it was (for example) a saturday (that’s the case).
Something like:
平
成
二
十
六
年
九
月
二
十
七
日
土

I know 土 is the shortened “name” for saturday, doest it make sense written in that way o none at all?!?

If its an official birth announcement, I think its also OK to use kanji only, since its a semi-formal occasion.

Parentheses should be used to separate the kanji denoting the day of the week, as @Majestic mentioned.

Note that the parenthesis characters have a special form for vertical writing, where they are rotated.

If you implement vertical writing properly, such as by installing and configuring Asian language support in your word processor of choice, this will be done automatically. If however, you decide to try to manually simulate vertically writing, it will be difficult to do this properly, and will probably look rather sloppy and unprofessional.

Note to @thomas or other administrators:

could you please move this ongoing discussion into its own thread (starting with post #1737)?

I would say all the followings are correct for vertical writing. You can choose the one you like. 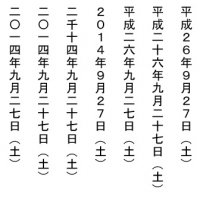 You just helped me a lot. Hope these posts can help others as much as they helped me.

Z
"Never Give Up" Kanji Tattoo