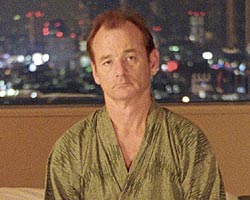 OMG, I was just watching TV and saw SHIBUYA but wait, guess what?!! It was a new motion picture called "Lost in Translation" and Bill Murray who also played the main charecter in "Groundhog's Day," goes to Japan to film a whiskey commercial! This is some big news to me atleast so check it out online, watch trailers and let's all go buy tickets so it dosen't turn out to be another "Mr. Baseball" (Tom Selleck,) B Movie!!!

Here is the first link I found,

OMG THE TRAILER ALMOST MADE ME CRY!!!! IT SHOWED HACHIKO AND EVEN SHOWED MATTHEW'S BEST HIT TV~~~ AAAA NATSUKASHII!!!!!!!!!!! Now I need to go buy the movie poster, t-shirts, hats and everything else....

anoo.. who is bill murray?
G

Originally posted by code7rei
anoo.. who is bill murray?
Click to expand...

He is an american actor that has been around for quite some time now.

Thanks for sharing the info, Josh!

Originally posted by code7rei
anoo.. who is bill murray?
Click to expand...

it was good, but

This is one I will definitely have to see! x a lot

"Lip them?! What?!" hahahahaha

I have always loved Bill Murray. Groundhog Day was great, also movies like Quick Change, and I even liked his small part in Wild Things. What I like about him is that he's so subtle at being so hilarious.
G

Yeah I'm going to cross my fingers in hopes that it will do good at the box-office so that then more people will be interested in Japan, then on my site aswell as Japanref you can watch day by day the new-member counters sky-rocket into numbers that no one even knew existed.

I mean, that's takin' the cheese off someone elses sandwhich and all but that's ok because I love cheese.

Originally posted by arnadstephen
(A prostitute invades Bob's room and orders him to "lip my stockings.")
Click to expand...

,, and that's what I'm paying good money to go and see so, "ha" to you and your out of context quotes.

You have the full link to the "complete" article.

That was the only negative comment on the movie !

this movie was great. Not the laugh out loud typical murray film but definetely a constant flow of chuckles. Beautiful shots of Tokyo at night and Kyoto looked incredible with its temples and gardens. Really enjoyed it.
S

Here's another link to the movie trailer, if anyone is interested:

I just saw it last weekend and that movie kicks *** especially since all the scenes were in my old stomping grounds -- Shibuya & Shinjuku. I've even had brunch at the top of the Park Hyatt before.

There was one scene where they go off in the car from Shinjuku or Shibuya, then next thing you see them getting on the Rainbow Bridge heading towards Odaiba. But then you see them coming back into Shinjuku next. Like they crossed the bridge towards Odaiba and end up in Shinjuku.

Anyway pretty much all the jokes about Japanese people & culture were spot on and not over the top at all. They poke fun at things such as L's and R's, Japanese people's height, the tradition of bowing, over the top TV personalities -- all of it the kind of stuff that anybody who has been to Japan will recognize. Besides that the story is really awesome. Actually it's not the story that was awesome -- because this could have easily been the most lamest movie of the year -- but it was the way it was acted and put together that somehow made it flower.

Anybody who has felt like a fish out of water in Japan or been jet lagged in Japan or have had some magical or romantic moments in Japan will have a connection with this movie.
G

I still haven't seen it but yeah that trailer when they showed part of Kabuki-cho I was like "Oooooo baby, that's 2 blocks away from the Milano spot." I'll probably just wait till they come out with it on DVD so I can peep the bonus footage,