I would like to put aside the recent troubles and ask for some opinions of Tokyo Medical University?

Sorry, but what exactly are you asking? Are you looking at studying at Tokyo Medical University?
W

I thought I properly used the word prestigious in my question administrator sir, but I do admit during my before post look over of your forum I did not make the proper observation that I would be required to give a reason for the asking of my question. I am humbled that the forum administrator would take such interest in a simple question to your forum members like the question I asked. I think I should ask my partner about this after she wakes up and has her coffee. She is better at understand these kinds of internet exchanges and places like a forum like yours administrator sir. I guess I am not understanding why your questions would be directed at mine in my post I did yesterday.

What sort of opinion are you looking for?
the curriculum? (we would need to know a specific major)
the faculty? (same as above)
language requirements?
grading?
facilities? (for teaching, housing, research, etc.)
degree status worldwide?

Help us to help you.

WatakushiNo said:
I thought I properly used the word prestigious in my question administrator sir, but I do admit during my before post look over of your forum I did not make the proper observation that I...
Click to expand...

Moved to “Studying in Japan” (I guess).

Watakushino, sorry that I'm not posting to answer your question but I read something interesting and rather sad that I wanted to share regarding the 'recent troubles' - I assume you are referring to the scandal with entrance exams discriminating against females.
One of the manufacturers of schoolbags in Japan every year asks 12 year olds what job they would most like to do when they grow up. Boys predictably enough wanted to be sportsmen. Last year the most popular job that girls aspired to was doctor. This year it was only the 9th most popular job. The newspaper article (a conversative newspaper too) put it down to the effect of the scandal.
W

I hope Rita's answer will be disregarded by Admin Thomas and, yes, I am the partner. I also hope my doing this post isn't a violation of Rita's membership agreement on JREF's Forum. She did log in, but I am now at the keyboard and she is looking over my shoulder. Actually, we have 5 of us in the room at the moment.

A group of us are here in Japan for the Cognitive Behavior Therapy (CBT) Canada CME Conference and arrived early so we could study events related to the aforementioned medical university and one of our members spotted and recorded the following on the university's website: Finding that caused some of us to reappraise our view that we were studying what we thought was a highly regarded learning institution in Japan and then somebody asked Rita to try and get some opinions outside of the medical community and she did that first post above after she checked this site.

One of our group did contact the university by phone this past Thursday, but he stated they seemed very strange in the responses and we are now asking some of our colleagues with the sister school, the University of Kansas, and the collaborative institution, The Royal Victorian Eye and Ear Hospital in Australia.

But opinions outside of the medical community can be useful and Rita chose your site.

By asking who , what , where , when , why , and how concerning our members posts , we are better able to give correct and more detailed answers. No hidden meaning or evil intent , or impolite reasons , we just want to give the best answers possible. With many members here not having English as their main language , sometimes posts are a bit confusing and we try to clarify things.
W

Waiting until the day after the Bon Holiday period sort of officially ends to present the view that a serious lack of professionlism is being exhibited by the administration of the Tokyo Medical University does not take into consideration that when a university is placing before the world an English language page that represents the university it makes no difference what kind of holiday might be used to hide behind as an excuse for not showing a proper respect for all in the medical profession, because there is little likelihood that anyone outside of Japan would be aware of a holiday such as the Bon Holiday.


And there we have a long introductory sentence in this post that is meant to introduce to this community and your guests that the Tokyo Medical University has not yet fixed that awful error that was explained to them on August 1st when a lot of time and effort was put into calling them to explain that the mistake had been spotted and to explain some of the reasons why that mistake should be fixed sooner than soon.


The mistake had not been fixed as of about 5 minutes ago.


And what did I mean when I wrote "not showing a proper respect for the medical profession" you might want to ask?


That sort of mistake reflects poorly upon all doctors, nurses, and the myriad of other specialists in the medical profession that are trying their best to not only cure, but to also display to the general public that those who have chosen this profession can be trusted. Can be trusted to do their very best to seek and cure. Seek answers and then be able to offer the proper cure for that which may ail another human.


So that sort of mistake on the 'About Us' page of a medical university doesn't just hurt the image of those that created it and have allowed it to remain there.


They were also told on August 1st about this: 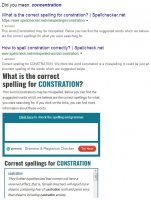 Yes, the word 'construction' would likely come to the fore of our thoughts on what was meant, but the word castration could more than likely come to mind before the proper word. It is, after all, the medical profession we are taking into account here.


Then there is also the very strong possibility that an important skill of medical professionals could be questioned – the skill to communicate.


Yes, the list presented to others regarding the just completed CME Conference might allow for some questions about the skill to communicate, and I should place at least two examples from the list so as not to appear hypocritical.


The late George Carlin would have had a field day with those two above.


So that might cause the average person to wonder about the communication skills of some that were noted in an August 4th post here.


In addition to the obvious communications problems displayed on that Tokyo Medical University page there is a concern in certain quarters whether the administration of an institution such as being discussed here fully appreciates the importance of how incompetence shown on the Internet can reflect negatively upon that institution and those that fall under the umbrella of that institution, both past and present.


I'll pause at this juncture, as this post is only a demisemiquaver.
J

WatakushiNo said:
Waiting until the day after the Bon Holiday period sort of officially ends to present the view that a serious lack of professionlism is being exhibited by the administration of the Tokyo Medical University does not take into consideration that when a university is placing before the world an English language page that represents the university it makes no difference what kind of holiday might be used to hide behind as an excuse for not showing a proper respect for all in the medical profession, because there is little likelihood that anyone outside of Japan would be aware of a holiday such as the Bon Holiday.

... has not yet fixed that awful error that was explained to them on August 1st ...
Click to expand...

(a) all this is about a spelling error? edit: and that you're miffed because they haven't responded to you.

(b) you win the contest for the longest sentence that I've read in some time.

I wouldn't want to offend you, johnnyG, by using the analogy of that being simplistic. Use of simple doesn't seem too polite, either. Especially in light of the manner in which you applied that edit to your post. You displayed a natural sense of professionalism. Please note the use of "natural" instead of "innate" which I believe could be viewed as offensive.


Let me lean upon Courtney Ackerman in her piece on her blog page under positive psychology and use "simple-seeming" when she wrote "diving into the complexities beneath the simple-seeming surface".


I also must admit to some envy that you wouldn't be offended, johnnyG, if the university your daughter or son were attending were to also apply such shoddy standards to their work when representing themselves to people not residing in Japan. That is not even delving into the entanglement of our focus being upon an institution of higher learning in medicine, where training in making life or death decisions is being offered to future doctors.