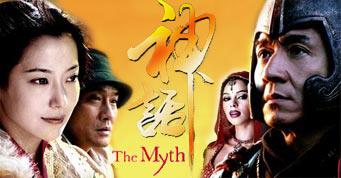 Synopsis: The year was BC221 when Qin Shihuang - the first Emperor of China - started to build a royal tomb for himself despite his infatuation with immortality. Through the prodigious endeavors of more than 700,000 forced laborers, the mausoleum was completed 37 years later. Legend has it that, to ensure utmost secrecy, all those who worked on the project were buried alive with the dead Emperor. There were no survivors.

Over the next two thousand years, historians, tomb-raiders, and happy- go-lucky adventurers alike have been homing in on the royal treasure buried within. However, no one has ever succeeded in locating the entrance to the mausoleum. Thus the bulk of the First Emperor’s treasure, including his much-fabled elixir of youth, remains intact.

Music video from the movie (sung by Jackie Chan and Kim Hee Sun) on youtube.com here

Just finished watching the movie myself, and thought it was a pretty decent movie. Although at some points the special effects were a bit poor, and the story is somewhat thin, i still thought it was enjoyable to watch.
It's also a relief to see Jackie Chan back on form, after what i consider to be a pretty poor venture in hollywood, havent seen or even been excited about a Jackie Chan movie for quite some time.

And as always Kim Hee Sun is absolutely stunning.

Gonna try and get it on DVD as soon as i can afford it.

I have seen this movie today~ about 4 hours ago.

And I must say ,This is an interesting movie,maybe It is the best movie I have seen this year~

And Jackie Chan has said:This may the last movie of him!

The Myth, Filming is a story unto itself

.
I read it was huge production. I think Jackie Chan, name recognition makes this a movie targeted to America. I read several months ago, that their were thousands of actors and such to film a scene in the desert. This was a story in itself.

The myth of tortoises...

W
The myth of the rise of China