The new Wendy's an burger! What do you think - innovative or inedible? 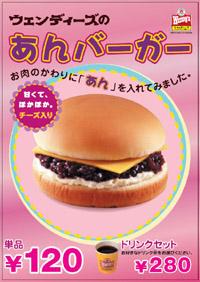 ﾂ“Anﾂ” is short for anko, which is a kind of bean paste that is very sweet. The white stuff underneath is mayonnaise and a slab of processed cheese tops it off.
​ 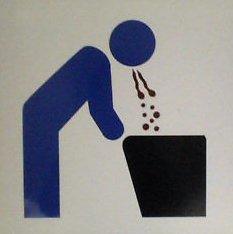 The combination of an (sweet azuki beans paste) and bread is nothing new, it is what "an-pan" (an-filled buns) is made of.
I love "an", and many find it goes with dairy products quite well, eating an-pan with a glass of milk is great, azuki icecream is also great.

But with cheese, which is salty? And mayonnaise as well? Which is sour and salty?

It's beyond my imagination... (or rather, I don't want to imagine what it tastes like!)

I'm with undrentide - I'm an "an" lover, but that makes my stomach turn. But at 120en I might just have to buy one for "JREF research"

I dont think I would be opposed to trying that at all!
Can someone send one to me???
I am the girl afterall who can find bliss in eating Japanese mayonnaise with anything... joyfully so with curry ramen.

My Grandad introduced me to Strawberry Jam and Cheese sandwiches when I was but a wee lassy. I like eating Cream Cheese, Pineapple and Avocado sushi rolls too...

leave it to fast food chains to take something I love and make it inedible. Thumbs down!

Though to be fair I've never been a friend of bean-paste.

A thing of a white thing of a burger
It seems to be the whip cream which is not mayonnaise.

A problem is cheese and bean jam.
Probably because there is cheesecake, there is not a problem.

I can't read the Japanese on the ad but could it possibly be unsweetened beans? Adzuki beans are good just by themselves, we have them with rice and season with shoyu, ginger and green onions. They could be done like a vegetarian bean burger. Personally, I don't like bean burgers, I prefer beans more whole, but some people like them in patties. 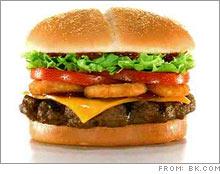 I'll take an Angus burger instead.

Cant say I've ever heard of or tried unsweet bean paste stuff, I dont remember trying more then a small bit of bean paste before deciding it wasnt my thing.

There seem to be many who have "courage" to try it out - I found many bloggers saying "I've eaten it!"

Hiroyuki Nagashima said:
A thing of a white thing of a burger
It seems to be the whip cream which is not mayonnaise.

A problem is cheese and bean jam.
Probably because there is cheesecake, there is not a problem.

http://www.tkamiya.net/junk/archives/004346.html
The stuff beneath the an is margarine, according to this blog.
It also mentiones that indeed it looks like whipped cream in the photo and the possibile change of ingredients after the photo shooting...
It's title says "Is the sliced cheese really necessary for Wendy's An-burger?", looks like he has the same opinion with Nagashima san.

undrentide said:
There seem to be many who have "courage" to try it out - I found many bloggers saying "I've eaten it!"
Click to expand...

I think someone here needs to get to a Wendy's and confirm how awful. I would happily but it's a four hour boat ride to the nearest fast food outlet and trying an an burger is not reason enough to suffer the journey. undrentide? Hiroyuki Nagashima? nice gaijin? Ewok85? (Kara_Nari, nurizeko and ChrisC are excused from this task). Go spend your 120 yen on an an burger next time you need a snack and give us a first hand account.

This photo is similar to those in your link unrentide. It shows just how different it looks from the picture. Burgers never ever look like the advertised picture. 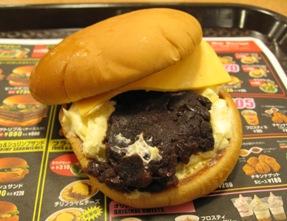 eww that photo (and the idea of a slab of margarine under the anko) makes me want to try it even less... maybe I'll get someone else to try it for me...

I'm breaking my own personal rule of not throwing away food that is edible and try a bite!!

I'll look for Wendy's when I venture out on a shopping trip tomorrow!! :win:

epigene said:
I'll look for Wendy's when I venture out on a shopping trip tomorrow!! :win:

In addition, I intend to try to eat mega Mac of McDonald of a topic now.

I'm Sooo glad they don't have a 'Wendy's' in Okinawa! yuk!

I will pass on the bean thing.

I do miss MOS burger when I get back to Japan it will be on my to do list.

Ew... I used to eat an anman a week I got to love the stuff. What weirdo thought this would be a good idea... it looks horrible. Now, I haven't tried it, but I really doubt I would enjoy it if I did.

Today a friend and I stopped at a Wendy's for a late lunch, and there was a large placemat in front of the register with the ad shown in the first post of this thread. I cajoled my friend into giving it a try.

It is indeed a slab of anko and a slice of processed cheese in a hamburger bun; there was very little of the white substance, and we didn't actually see it before consumption, so we were unable to identify it. Attached is a photo of our burger.

He took a bite and had a long moment of silence. He said it wasn't bad by any means, but it was hard to classify. The anko and the cheese is a strange combination, as you never taste both simultaneously; it's either all anko or all cheese. The hamburger bun is another interesting element, for it's much different from the kind of bread that generally accompanies anko. I took a bite and had to agree with him; we just couldn't figure it out.

ﾅ停?ｹ窶ｰﾃ環： worth trying, but I probably wouldn't buy one again. I like to keep my entrees and desserts separate.

nice gaijin - great work. At last a first hand account. It sounds (and looks) so awful.

It really makes me wonder what was going through the head of the person who dreamed up the idea.

Like I said, it's not bad, just... weird. This will probably be a short-lived product, I reckon.

The photo is great to see the details, but, er, it does not look mouth-watering to me... I do agree with your conclusion, I want to have the main dish and dessert separately.

At least Wendy's is quite successful to attract people's attention, I bet.

Hahah, actually I clicked on Nice Gaijins photo to get a close up look... it still looks good!
Was the anko sweet?

Anko generally isn't all that sweet, I still haven't got the courage to take one of those on, I'd rather not redecorate the store if it doesn't agree with me.

I didn't get to try it -- I couldn't find a Wendy's outlet where I went shopping.

It certainly must be an marketing ploy as Nagashima-san said, but it probably didn't work to attract great attention, since I haven't heard about it in the evening news...

B
Looking for an okoshi recipe

Octopus - a tasty food or an alien invader?
2

B
The Japanese Diet