Return to the dark ages.

My cable company had a major breakdown and I lost TV , internet , and telephone for about 24 hours. I think I played 500 games of Solitaire while going crazy with no entertainment , LOL. We are due to get a bad storm with 60 MPH winds tomorrow so I'm praying I don't lose electricity and cable all over again. . 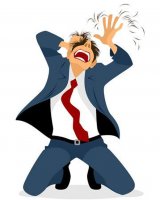 That's terrible Uncle Frank. So I guess it was no pizza for the evening.

Boy , this is not my lucky week. We had a major wind storm that knocked out electricity for 32 hours , just not got it back. I live in the middle of the biggest city in Maine and we have never lost power for so long. My poor neighbor had a giant tree come down on his brand new truck and crush it. Most everything in my freezer unthawed , but that was the only loss I suffered beside no internet for 32 hours , LOL. Glad to be back.

Morning Frank. Glad to hear that all is well for you. Did your frozen pizza's get bbq'd lol
Great to see ya back in service.
Maine, never been to that state. I heard the lobsters are very tasty there.

Seems more and more , Maine is famous for good food and fancy beers. I like lobster , but the best tasting seafood I ever has was Alaska king crab fresh off the boat while I was stationed there. I about starved while stationed in Japan. I was a fussy eater who hated rice , fish , and all vegetables and noodles. I would go to American style hotels to eat when off base.

Glad to hear you’re fine, Frank, and have your internet back, too!
T

My dad was stationed at Loring AFB and I remember Maine for being where and when I got my first proper training / lesson in how important taking care of one's back can be for sports. But I didn't get that lesson on the football field, but out picking potatoes for a dollar a barrel, if I remember that amount correctly. And I did not put rocks in the bottom of the barrel first, which I saw a fair number of other students do.

They let us out of school for --- I don't remember how long --- but it was at least a week. Probably longer. And it was Coach Gillespie that was doing the driving us out and watching and all that and also making the point to some of us that needed the lesson that now was the time to learn proper back stretching exercises. That picking potatoes business was seriously not easy work.

It is a very, very good lesson for a young man to learn early in life --- and I sure was young then --- don't remember for sure how young as I type this, but it was a long time ago. The lesson, though, is when you see folks working out in a field you better believe they are at some very hard work and it really could be that unless you have actually done that kind of work yourself over at least a week you might not really understand how tough that work can be.

But I think now there are a lot of them tractor=type things doing work like that, but in some areas around this planet I have seen folks out in a rice field or some other type of field and right away I can appreciate that those folks have it mighty tough.

Oh, by the way, folks --- I'll bet this will surprise you --- up in that place called Maine they have this weird stuff that falls out of the sky --- free of charge, too -- it is called snow in English. They get a bunch of that stuff in that place where the Uncle fella who owns this thread is living. You might not believe me, so he'll let you know it's true. Lots of it. White stuff, it is. Normally cold when it gets dropped all over the place. And it's free. Imagine that.

My mom was from Presque Isle(northern Maine) where potato picking was part of life. Her family was so poor , they had an outhouse till the 1980's. Her family had 12 kids. When they had a female baby , they pawned the girl off to relatives and only kept the male babies for the hard farming work. My mom was sent to southern Maine, her sisters went to Massachusetts , Michigan , Alaska , Florida. Maine winters seem to be getting a little easier with global warming. When I was young , get 3 to 4 feet of snow in one big storm was common all winter. Now we just get 1 to 2 feet of snow for most storms. Everything I see about Hokkaido makes it seem a lot like Maine weather wise.
T

By the way, Uncle Frank, have the state or local law enforcement agencies tightened up the snowmobile regulations? I mean, I seem to remember back in the 60s there wasn't much stopping anyone from charging across the landscape, except for fences, which you'd better know where they are, or big, big trouble. But it was pretty loose about what you could do with one of them neat little vehicles. But I suspect that now that has changed --- yes?

Of course, if you are getting less snowfall these days, maybe there are fewer folks using the snowmobile.

In fact, that reminds me of something; that border up there with Canada used to be really open and so loose. You could charge back and forth with a snowmobile --- if you were sort of careful, no problem. I'll bet that has changed, too.
Share:
Facebook Twitter Reddit Pinterest Tumblr WhatsApp Email Share Link