Hi everyone, I hope you are all well!

I have been trying identify and translate the clerical script characters on this hanging scroll, however, a couple of the characters are a bit tricky, so I was wondering if any of you kind people here might be able to help me.

I think that the line of clerical script at the top reads - 徳川家康公御遺訓 (The Precepts of Tokugawa Leyasu), which led me to the Wikipedia page of Tokugawa Leyasu (great read), where I found a translation of the main body of text.

The second part I don't really understand at all, (photo 7), I think it may read - 拝州北脚山途上 The kanji in red I am not really sure of, I thought at first perhaps 山 may be 心, but it is not written the same way in 徳 at the top. Can anyone read this part? If so, what does it say?

The final section (photo 8) must be the name of the calligrapher, but I cannot identify the first kanji - ?海堂正信書. Anyone have any ideas? I wondered if it could be 杏, as Jisho has five names registered for 杏海, but I just don't know!!!

As always, many thanks in advance if anyone can help me figure this one out! 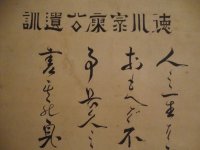 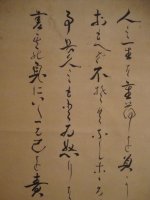 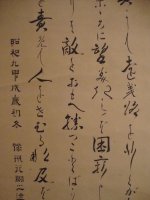 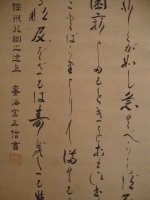 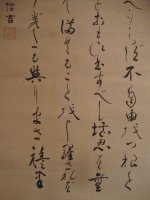 I don’t know of an old province called 拝州 . I think 信州 (Shinshu) looks more likely. I think the third last kanji is 之 rather than 山. I wonder if the calligrapher’s name is 春海堂正信. I tried looking for Shunkaido Masanobu but couldn’t find one. I admit that I’m guessing.

What is written on the top is 徳川家康公遺訓 (there is not 御 after 公). 御 is just an honorific, so the meaning is the same whether 御 is there or not, though.

#7 is 豫州行脚之途上, meaning "in the midst of traveling around Iyo". 豫 is the traditional form of 予, and 豫州/予州 refers to 伊予 Iyo Province, the present Ehime prefecture.

Thank you nedkelly! I was just guessing with 杏 too, because I googled 海堂正信 to see if any results would come up with a name, with the first kanji there too, but there were no results that I could find, so I think this person will remain a mystery!

Toritoribe, as always, thank you for your expertise! I do not know how I included this extra kanji 御 into my own work, I think that when I copied and pasted the complete text from an online source onto my sticky note, I must have updated my work with the title of that source, without realising. And thank you for clarifying this middle section, I really do not know many Japanese place names in kanji, so they are always difficult for me to work out!

Note that it is Tokugawa Ieyasu, not Tokugawa Leyasu. (The second name starts with a capital I.)

C
Question Anyone to translate a short quote (EN to JP) please?

can anyone tell me what the translation of marineangemon's song ''ocean smile'' is?

D
Can anyone help with this?

Can anyone translate this phrase?