more from the Dear Leader

<http://www.boingboing.net/images/koreantour.jpg> Crank up your speakers, comrade! This flash movie from "The Korean Friendship Association" -- their website claims they're sanctioned by the DPRK government -- promises an awesome getaway to North Korea with many! electric! guitars! The choral-accompanied montage includes shots of fun relay games, Kim Jong Il <http://en.wikipedia.org/wiki/Kim_Jong-il> , and these weird "travel transition" shots -- in which a tiny red plane icon appears to attack a larger passenger plane. Totalitarian tourism!
links:
http://jason.defillippo.com/NKDelegation2005.swf
http://www.metroblogging.com/NKDelegation2005.swf


Read more about the rockin' vacation destination nation in the Democratic People's Republic of Korea newspaper, which today accuses the South Korean Authorities of possessing a "sycophantic treacherous mentality."
http://www.newspaperindex.com/blog/2005/03/04/news-from-another-planet/

Update: North Korea upset with Boing Boing.
We knew Kim Jong Il's regime rationed rice and soybeans from time to time, but -- bandwidth? An hour after this Boing Boing post was published, the KFA movie was replaced with a message scolding yours truly for having had the audacity to link to it:
<http://www.boingboing.net/images/korea-dpr-pissed-at-boingbo.gif> Access to the requested object was denied.

Due to some inconsiderate people linking directly to our multimedia we were forced to take the content offline since it generated too much traffic.

This kind of careless linking to high-profile sites is typical of the internet where people no longer respect that such links could make free content less available.

We will never charge money to pay for the bandwidth, so if people are going to expect high-quality content they should make their own copy of the large file and share it from their own server.

Questions can be sent to [email protected] for technical advice.

Thank you and have a nice day.

Should have read the unfriendly copyright notice <http://www.korea-dpr.com/kfa2005/> on the Friendship Association website first:

If Dear Leader objects, I hope that he will not set up us the bomb.

Wouldn't it have been spooky if they had put up a .torrent instead? Then the MPAA really would have had some basis for the file-sharing = communism case <http://www.boingboing.net/2005/01/05/bill_gates_free_cult.html> .

But who exactly is the "Korean Friendship Association," and how closely are they associated with the North Korean government? Despite the fact that the KOREA-DPR.com website identifies itself as "Official Homepage - Democratic Peoples Republic of Korea (DPRK, North Korea)", this Slate piece by Paul Boutin <http://slate.msn.com/id/2076686> says:

If Dear Leader's home page seems like a fanboy shrine, that's because it is. It's built in Barcelona by Alejandro Cao de Benos, a twentysomething Spanish IT contractor who frequents Pyongyang. ("It's so different from what people say," he claims over the phone.) By crossing Karl Marx with the Cluetrain Manifesto <http://www.cluetrain.org/> , Cao de Benos convinced DPRK cultural officials that to garner support from the Google generation, an amateur site beats no site at all. He maintains it as a volunteer project for North Korea's Committee for Cultural Relations With Foreign Countries.

But it may be the one national home page not visible to its own nation. Inside North Korea, local intranets aren't allowed to plug into the Internet's corrupting content. The country's Web site, served from an ISP in Texas, is for foreignersﾂ―it's a digital, pro-Communist equivalent to Radio Free Europe.

Here's the WHOIS data <https://joker.com/?&tool=whois&t_whois=korea-dpr.com> , and Here <http://korea-dpr.com/about.htm> is how the KFA website describes itself:

This page was created by the Korean Friendship Association with the support and official recognition from the government authorities of the People's Democratic Republic of Korea.

"We are an arm, but with many western people, given that we are a volunteer organization run on the internet towards the west, and not many North Korean people live outside the DPR of Korea. Our president of the KFA, Mr. Zo Sun IL, formerly known as Alejandro Cao de Benos, from Spain, now has dual citizenship and is a DPRK citizen also, apart from working for the DPRK government as Special Delegate. (...) We are not state sponsored, but we are totally state approved. We are a non-profit organization called the Korean Friendship Association who works for understanding of the North Korean culture. Our ministry which we cooperate fully is the Committee For Cultural Relations with Foreign Countries in Pyongyang, DPR Korea (...) You can even find pictures both of me, Alejandro (ZO), and other people in our organization from our last delegation to the DPRK, where we met with DPRK officials: Link <http://www.korea-dpr.com/gallery> . But I can say immediately we are not a hoax. An objective (but definitly not authoritative) source is wikipedia <http://en.wikipedia.org/wiki/Korean_friendship_association> ."

Membership is free, and open to all people regardless of nationality, race, religion or political orientation. There are only two conditions for joining:

The membership may be cancelled at any time by each party, by one party informing the other. They also have a cute little flash karaoke where members can sing along to the song 'Let us advance the people's army': Link <http://izreloaded.tripod.com/february2005-pt2.htm#friendofnkorea>

Luckily, there is another fantastic source for DPK propaganda: shortwave radio. The DPK sends out an English-language broadcast via shortwave that will blow your mind. A typical broadcast is filled with Personality Cult ramblings about how great Kim Jung Il is, bookended by some music that's actually pretty cool. Anyone who misses the cold war propaganda of Radio Moscow will not be disappointed. Listeners in North America can tune in daily at 1500 UTC on 9335 or 11710 kHz, while Europeans can listen on 11335 or 15245 kHz. The European broadcast repeats at 1900 and 2100 UTC on the same frequencies.

Update 2: We get signal <http://en.wikipedia.org/wiki/All_your_base_are_belong_to_us> . Main screen turn on. The mysterious KFA have updated their denial notice to read, in part:

We encourage people to share files on the internet to conserve resources, and we are considering expanding our selection of free multimedia content (Flash, MP3 and MPG/ASX/ASF) to make as much as possible available to as many as possible so that they may learn about our culture. The logical course of action is to use P2P technology such as found in the Bit-Torrent system. We will announce when the use of such system is available. In the mean time, we have to restrict access to some areas. Please check back in one week. Thank you for your attention and letters of support. (...)This webpage and its images is released to the internet community under the terms of the GNU Free Documentation Licence."


(Thanks, ScottG in NYC and Matthew Moore <http://www.pathfinderlarp.org.uk/> )

One thing is clear: the KFA know how to rock! out! BB reader Will <http://spamguy.blog-city.com/> says:

I yanked the kickass soundtrack from the North Korean Delegation animation. Quite frankly, I'm sticking this in iTunes and keeping it on repeat on my iPod as I ride the Greyhound to New York City for 8 hours. Meanwhile, remixers, start your engines! Link to MP3 <http://spamguy.cwru.edu/misc/music/nkdelegation.mp3> .

The soundtrack to the Korean Friendship Association video sounds like the work of the DPRK's own easy listening outfit, the Pochonbo Electronic Ensemble. Anyone with the time and inclination to identify the piece can try searching through the twenty-seven volumes of MP3s by the Pochonbo boys on the Korea Computer Centre website <http://www.kcckp.net/en/art/music/music.php?21> . A lot of the songs are slow ballads expressing love for the country and/or party, but there are also some annoyingly catchy pop-ish songs that would be ripe for remixing. And if you like the song from the video, you'll love "Reunification Rainbow <http://www.kcckp.net/en/art/music/music.php?21+23+2> " with its electric! guitar! solo!

A day in His Life in the DPRK 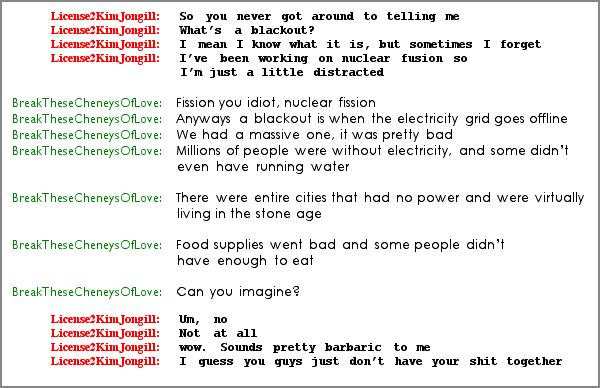 And this guy kidnapps Japanese actors to make movies for him, and citizens so the DPRK agents can learn Japanese better?! Right..........

from DPRK with love

Dear Leader is supposed to be a film buff, too; his collection of 8mm reels is supposedly world class. I wouldn't be surprised if some Hollywood orgininals resurfaces in Pyongyang someday.

That gives me an idea, actually. The saying goes, "The Japanese are very suspicious of foreigners." It also goes, "All ****-asian looking foreigners are supposed to be Americans, and therefore should be addressed in English." Put two and two together, you get two-two, that is the frilly ballet skirt which explains the advanced contemporary dance in the DPRK, but that would come out as tsutsu in the Japanese speech habit which becomes quite confusing.

Back on topic, the sayings are actually Japanese intelligence tactics to weed out any Russo-DPRKorean agents who try to pass as Americans. In fact if the Japanese shibboleth titty comes out at chichi, then they assume you are a Russian agent on the DPRK payroll. That would be disasterous for anyone accustomed to the Japanese phonology messing up the shibboleth.

As for the kidnapping, technically speaking, Japan never signed a peace accord with the DPRK, so they would call it securing civilian service personnel with deferred voluntary enlisting. Several fine film pieces were produced with a S.Korean actress Choi, Sung Hi, and her husband, a film director, who mock-defected just to get her out. He had to shell out a couple of movies before surveillence got loose enough to wade back out down south with love.