News JPY at its weakest level vs. USD since 2002

A further slide would increase pressure on neighboring Asian economies such as China and South Korea, which are losing out in export competitiveness.
Click to expand...

Realistically speaking, could it happen？ It would be very good in the middle of so much struggle. Meanwhile it seems that China is messing itself with its zero covid policies, making many foreign companies to consider readjusting their logistic and factories etc. It would be interesting all these changes in tech dynamic that contrasts that of 30 years ago!
H

thomas said:
Also, there does not seem to be much they can do.
Click to expand...

I think this will be a common story worldwide soon.

What the BOJ could do is stop printing money (fixing bond yields), which would stop the loose BOJ / tighter Fed & others dynamic that's pushing the yen down, and thereby stop the pressure on consumer prices that's basically driving them towards poverty.

On the other hand, if they decided to actually tighten, it'd risk a recession -- also good at making people poor.

So they're pretty stuck, and its stagflation time for us. Which really sucks -- very hard to position yourself to defend against stagflation. For income: weak labor market, rising costs. For assets: recession risks a crash so usually want to be in bonds, but bonds are worthless under inflation. Buy gold or other commodities? Still plunges if a crash happens. Stay in cash? Getting eaten by inflation.

I saw on the news though that Michael Burry is investing in "defensive" stocks, e.g. Google, which are less affected by recessions, and therefore a middle ground between crash risk and inflation risk.

Income is a bit harder -- need to work out a side gig where demand increases during recessions.

Here's a summary of what the weak yen means for Japan and what caused it initially, aimed at non-economists (such as I).

Source: Why Japan's Yen Is the Weakest in 20 Years and What That Means


Meanwhile, the media continue to make a bogeyman out of poor Mr Kuroda.

The price increases are troubling, but it can't be helped. I'm cutting back on eating out," said Seiko Fukuchi, an 82-year-old housewife shopping at a Super Sanyo supermarket in Tokyo's Adachi Ward on June 10. About Kuroda's comments, she told the Mainichi Shimbun, "He and those around him may be leading good lives, but there are people having trouble making a living because of the coronavirus. I want him to think before he speaks." One 74-year-old pensioner said she was "really angry" at the central bank governor's statement. "I thought, 'Try living on the same salary as the average person for a month.'" About the recent price hikes, she said, "My generation experienced the oil shock. It was fine back then because our wages also went up. But I'm frightened now because I've seen this kind of inflation. I can't go out and do anything for fun (that costs money)."
Click to expand... TOKYO -- The Japanese yen dipped to the low 135-range against the U.S. dollar on June 13, the weakest it's been since 1998. The yen's historic drop ha

However, he seems unfazed. The Bank of Japan will not be bullied Ouch! The JPY saw a new record low today: 138 139 JPY to the USD. How much lower can it go? Our US hosting is getting prohibitively expensive.

The yen fell to a fresh 24-year low in the 138 level versus the U.S. dollar in Tokyo on Thursday amid growing prospects of aggressive rate hikes by the Federal Reserve, with the weak Japanese currency also helping stocks end higher.
Click to expand...

The yen fell to a fresh 24-year low in the 138 level versus the U.S. dollar in Tokyo on Thursday amid growing prospects of aggressive rate hikes by the Federal Reserve, with the weak Japanese currency also helping stocks end higher. The 225-issue Nikkei Stock Average ended up 164.62 points,… 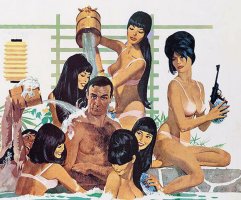 How I felt in Fukuoka in 1971 when one US dollar bought 360Y. Hard to believe it was that low.

Did you hear that the guy who wrote/composed the theme song for the Bond movies died just recently? Monty Norman, the composer of the James Bond theme, dies at 94

To produce the iconic theme song, the late composer drew on a piece he had written for a proposed musical adaptation of V.S. Naipaul's "A House for Mr. Biswas."

Facebook had a lot of posts about his death and examples of his work. Besides the great music , there were pretty nice Bond girls over the years.

The other side of the coin, the other way to see it, is as a strong dollar.

Also, tho about half as much as the yen, the euro (now at parity) and pound have also shifted. CNY and AUD have weakened least of all (against USD).
日

johnnyG said:
The other side of the coin, the other way to see it, is as a strong dollar.

Also, tho about half as much as the yen, the euro (now at parity) and pound have also shifted. CNY and AUD have weakened least of all (against USD).
Click to expand...

I was going to speak about Euro too, most of the major currencies are getting weaker against dollar. Very hard, I suppose it is because most of developed countries are resisting to raise interest rates
J

And hey, at least japan is not on this list (yet): The big default? The dozen countries in the danger zone

Discrimination/racism in Japan vs non-Japan
3 4 5