Did Jesus settle down in Japan?

Did Jesus Christ escape crucifixion and live out his days in a tiny village in northern Japan? The Bible says no, but a Japanese legend says he did. His tomb, and that of his brother Ishikiri, are in the hills above Shingo village in Aomori Prefecture. Shingo is a remote, strung out settlement of a few dozen houses jammed against the mountains to save the precious arable valley for crops of rice and garlic. It was once called Herai. Some experts believe “herai” is the word for Hebrew in old Japanese.

The legend fills in the 18-year gap the Bible leaves in Christ’s life. At age 12, he is confounding the priests in the temple with his knowledge. Then he disappears until age 30, when he begins his ministry. The legend says that Jesus came to Japan at age 21 to study Oriental philosophy and theology. After a decade, he returns to Jerusalem and begins to teach and heal the people of Israel. His ministry brings him into conflict with both the Roman and Jewish authorities. He is arrested, tried and sentenced to death. But, because of mistaken identity, his brother is the man crucified by the Romans.

The legend does not explain how his brother takes his place on the cross. Crushed by these disasters, Jesus longs for the peace and quiet he enjoyed as a student in Japan and determines to return. It takes a year, but he finally arrives at the port of Hachinohe, bringing his brother’s ears and hair with him, so his brother’s spirit can rest in peace when Jesus settles down in his adopted homeland.

The brother’s Japanese name is Ishikiri. He is buried in the second mounded grave above Shingo village.

Christ settles in an isolated valley in northern Honshu, far away from the powerful Shogun in Edo (Tokyo). He first came to Japan about 25 B.C., during the reign of Emperor Suinin. He had lived and studied in Toyama Prefecture, west of the capital city, and knew first hand the brutal power exercised by the Shogunate. He found tranquillity and safety in the remote valley.

He was already fluent in Japanese. To gain the trust of the rural farmers of Aomori, Jesus adopted a Japanese name: Herai Taro Ten Ku. This part of the legend is documented. Assuming the word “herai” means Hebrew, he deliberately identified himself as a Jew.

Jesus, or Ten Ku, set to work again. He began to teach and heal these rural families. His good works are legendary. He once walked several days to bring food and medicine to starving, snow bound families. Slowly, he was accepted by his neighbors. He became a revered member of the community for his good works as a teacher and healer. He was rewarded by being given a nickname, a mark of affection and acceptance in the polite, rigid Japanese society. They called him “Tenju,” or longnosed goblin, because of his pronounced Caucasian features.

Another mark of his acceptance was his marriage to Lady Miyu. He fathered three daughters and lived to the age of 106. When he died, he was buried beside Ishikiri in a small pine shaded plot of land, some 100 yards up a steep slope above Shingo village.

Next week’s column will examine this story further. Obviously, it is more legend than fact, but there are some intriguing clues. And the column will offer a possible explanation. It may not be Jesus Christ, but someone very important is buried under that mound.
Click to expand...

Nice find there Dutch Baka san !! I had had that story in the past, and had lost it. (If you were to check my #110 post on page 5 of the 'Christ in Japan' thread, you'd find I mentioned it in the next to last paragraph.)

What I would love to do, would be to find out as much as I could on where exactly the story came from, how it was spread, and what type of person it made have been based on or drawn from or started by.

As far as any probability of the story's being true history, that's extremely low. . . as in less than 1% chance. Thanks for posting that. I'll print in out and keep it this time. I do hope you follow up with the follow up on that report, and let us know the source as well. THANKS A LOT !!!

It's been along time since history class, but doesn't "B.C." stand for "Before Christ"?

So he first showed up in Japan 25 years before he even existed?

I think the actual date is now thought to be 4 BC... and no later since Herod died in 4 BC.

It's been along time since history class, but doesn't "B.C." stand for "Before Christ"?

So he first showed up in Japan 25 years before he even existed?

yeah well ya see the bible and the calender figure out from it since was rather wrong about all the timings for example jesus was "supposed" to not have been born on the 25th dec at all but that the festival was brought forward to co-incide with a pagan festival...

also he was suposedly born in like 25 BC not 0... again all faults with whoever made the calender in the first place lol
C

There is some well-researched material there, but the hypothesis must be checked out well in each case. Thanks for sharing those sites, caster51 san!! MM
C

But , Onisaburo was a monster.....
there are still many believer of him.
http://aizenen.info/en/od/av.html
Na-Nee-Ya-Do-Ya-Ra
http://www.thiaoouba.com/tomb.htm
emishi
https://en.wikipedia.org/wiki/Emishi
Last edited: 14 May 2006

That having been said.. i claim he was in it for the chicks , Jesus sure was a true Gaijin

(no offence to you christian people, just a mindless joke)

There is an interesting article on Herai Village on BBC 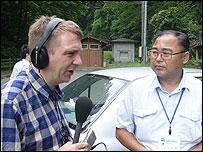 In 1966/67 I read a strange story about Jezus in the French magazine Paris-Match.
It so happened that Jezus left the Middle East and went for many years to the Far East, that's to say to India. Many of Jezus sermons and wisdom were clearly influenced by the Far East, so the article said.
He was not dead when he came from the cross, he went back to India, to Kashmir, where he died at the age of 66 years old and where one can find his grave.
As for his wife Mary Magdalene, she flee with their children to Marseille, in those days a Greek colony.
Share:
Facebook Twitter Reddit Pinterest Tumblr WhatsApp Email Share Link