South Korea illegally occupies Takeshima since their independence (1945).
Japan continues to tell SK "Please go away from our island" but they say "Don't say anything about Takeshima".

Last week, when Japan has decided to include "Takeshima territorial issue"
in Japan’s new educational guideline which implies that Takeshima is an integral part of Japan, South Korea has begun to overreact as usual.

I don't know when Japan can regain "Takeshima" again, but it is obvious that Japan is moving forward to regaining the island step by step.

Regarding the issue of Takeshima, Japan's official statement can be seen at
http://www.mofa.go.jp/region/asia-paci/takeshima/index.html 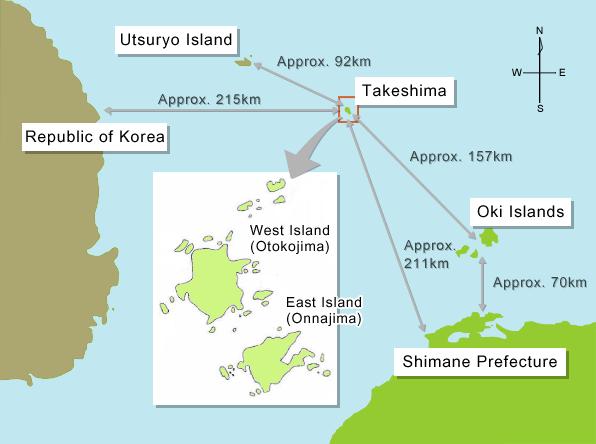 As you know, Korean is quite unique people in a way, and their behavior is quite unpredictable when they don't like to hear something unfavourable to them. In short, .... inscrutable.

In order to protest something, firing storm is not novelty in South Korea.

Korean started killing pheasant (a sort of bird) in front of Japanese embassy in Soeul.
According to Korean news, the pheasant is one of Japanese symbolic birds. And because of that, those birds are killed. 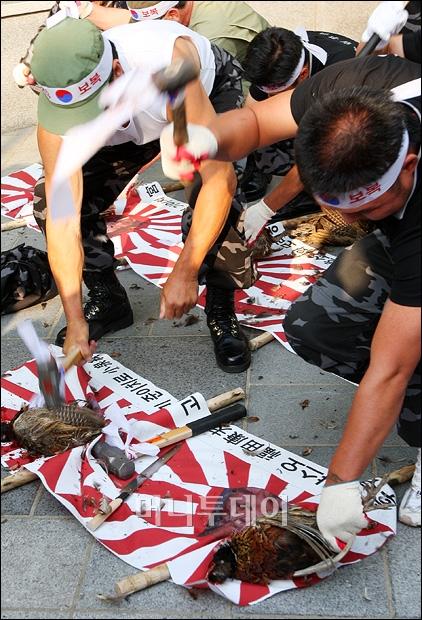 Reportedly, Koreans ate those birds' raw meat .... after slaughtering the birds....
More cruel photos by AFP can be seeable at http://www.afpbb.com/article/politics/2419347/3140551

Day by Day, Korean overreaction over Takeshima territorial issue has been escalating.
Now, Korean began with "Takeshima is mine" campaign in NY.

A life-sized figure of thief wearing a Japanese flag as a mask is installed on a signboard in Manhattan's Times Square. The sign reads, 'Stop island theft. Japan attempts to steal Asia's islands by distorting history.' It is part of a 'guerrilla' campaign by Yi Je-seok of advertising agency Draft FCB New York to promote Korea's sovereignty over the Dokdo islets. Yi produced and installed the figures around Times Square and the Empire State Building. Source: Korean Yonhap
Click to expand...

Probably Korean believe that if they speak loud, the world will listen to them.

Firing something looks quite common in South Korea.

Is this one of typical Korean behaviours ??? - Speaking Loud & Act Violently, But just Barking, while Japan is always quiet and smiling.
I personally suggest Mr Ambassador to take more summer vacation in his country.

Korean mob trying to fire pic of Japan's emperor Akihito as a protest over Japan's claim about Takeshima islands. 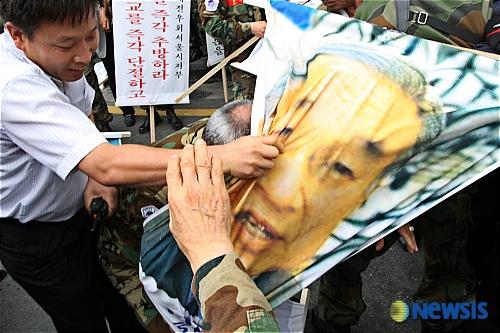 Let's be patient as we are Japanese.
D

Eventually the UN will say give Japan back its territory, and Korea won't think twice about it.

According to Korean YonhapNews, US National Geospatial-Intelligence Agency has changed sovereignty of Takeshima (Dokdo in Korean) from South Korea to "Undesignated Sovereignty". 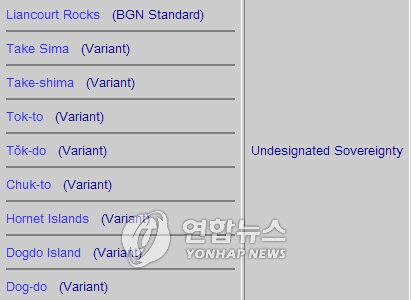 Another step towards regaining Takeshima, I think.
Last edited: 27 Jul 2008

I can't take my eyes off of Korea !

What do most Japanese think of the issue?

manners said:
What do most Japanese think of the issue?
Click to expand...

As you know, most Japnese (or 100% Japanese) are quiet and enjoying Korean over-reaction. Media coverage is almost none here because it is not worth to comment.

Some Japanese believe that this issue will help us cut off bilateral tie with South Korea. And I am one of them. It is not the time of cold war, and thus Japan does not need South Korea as a block for communist threat. Both North and South Koreas are the same anyway- anti-Japan and anti-USA. So doesn't matter.

Considering peace is the best route for any nation you would prefer to cut off bilateral ties.

manners said:
Interesting.
Considering peace is the best route for any nation you would prefer to cut off bilateral ties.
Click to expand...

One can never underestimate the ability of Japan, Korea and China to bicker, insult and generally behave like pathetic wagamamas to each other ad nauseum. Is there something in their shared heritage which prevents them getting along? And now there's apparently even crazy-talk of cutting diplomatic ties. Meanwhile, almost the whole of Europe has become a border-free zone...
Last edited: 29 Jul 2008

Yes manners, check it out you will have a laugh, I know I did.LOL

South Korea's current account deficit has continued to increase to USD5.3 billion for the period of Jan - Jun 2008, up by some 230% from the previous year. SK government forecast the deficit will increase to USD10 billion by end of year 2008. South Korea suffered from import cost increase.
http://www.nikkei.co.jp/kaigai/asia/20080728D2M2801X28.html
Click to expand...

Concidentally, value of SK currency WON has continued to decline. It is a sign of financial crisis of South Korea. Good timing for Japan to raise Takeshima issue as SK cannot ask Japan for financial help.
C

One can never underestimate the ability of Japan, Korea and China to bicker, insult and generally behave like pathetic wagamamas to each other ad nauseum.
Click to expand...

they do not know the concept "Equality"
it is very important who are getting a dominant position in Korean society even individual preson.
It is a society that feels abnormality even if it sees from the Chinese of
individualism.

Sympathy to others and the spirits of affection of the South Korean who lives in such a society are none at all.
Therefore, feelings and the attitude of "Equal feeling" that the Japanese universally has and "Equality" look the South Korean like loser's attitude.

The Japanese doesn't understand the South Korean so much though Chinese understands South Korean's frivolous spirit well.
The problem occurs because the Japanese thinks and treats the Korean "Decent human"

Chinese advises to the Japanese about korean.

The Japanese must associate with the South Korean like a dog with thought
it is good for korean. Never apologize.

Punish 100 times when the Korean say the reason without logical..
Touch the gratitude so that the king may give the vassal the reward.
Neither the just argument nor the reason are significant. Move them by compulsion and the instruction.

Taiko666 said:
Meanwhile, almost the whole of Europe has become a border-free zone...
Click to expand...

LOL. Until the end of 20th century, Europeans continued genocide in Europe - especially Balcan or former Yugoslavia. And the troop from your country may have done nothing in front of genocide.

I thought this was about Takeshima.
D

I think his point was more of, what Europe has become. Not what it has done, and hopes Asia can eventually change for the good too.
A

"South Korea claims it as Korean territory from records that date back to the sixth century during the Unified Shilla period and on the 1900 Korean Empire ordinance officially incorporating three islands into modern Ulleung County. Japanese claims come from seventeenth century records, as well as a "terra nullius" incorporation in 1905. Today, South Korea classifies the islets as a part of Ulleung County, North Gyeongsan Province, while Japan classifies them as part of Okinoshima, in Oki District, Shimane Prefecture. "

So, not only are the islands nearer to Korea, but they were claimed as Korean 1000 years before the Japanese claimed them?

Forgive my ignorance, but this situation seems to have been considerably blown out of proportion.
T

i think personally...you won't get them back until you have an army.

because the USA is not going to start ANOTHER war in Korea over some tiny rocks it doesn't care about and have nil tactical value...

and the UN won't do squat to South Korea because it has done SO well with it's sunshine politics towards North Korea..

infact internationally if Japan Moves to take these islands back (even using diplomacy)...it will be seen as an agressive move....and we ALL know what heppened the last time Japan started taking islands...

Japan will demand the islands back...
South Korea will put 100 men on the islands
and China will see a wonderfull way to piss off Japan and Cement relations with its nice rich neighbour by declaring that It will support South Korea should any armed conflict arise..

this means the US or ANY western power won't go near it...as we are all busy trying to be china's friend...but don't want to be put in a position where it's proven to the world that China is now top dog

Russia will also move to block ANY re-ownership moves on japanese islands..

thus the UN won't say squat....because 2 of the 5 security council will DEF. objects to japan...
the UK...will Object to japan cos were trying to get china on side...

the koreans are already working on the US...
and the french...well there french...but that probably means they are not going to go against china either.

so in short...your not getting them back...

According to Japan's Sankei News, South Korean Prime Minister (I don't know the name but .... must be either Kim or Park or similar) visited Takeshima island to demonstrate "This is mine!". Reportedly South Korea is scheduled to implement military training near the island.

Anti-Japan protestors dropping eggs and tomato on J-flag in front of Japanese embassy in Seoul.

A
How the world learns about Japan - in 5 steps