Feb. 4 (Bloomberg) -- Japan and South Korea's finance ministers agreed on a $15 billion currency swap accord today that may improve economic and political relations in the region.

Under the agreement, announced today by Japan's Sadakazu Tanigaki and South Korean's Han Duck Soo, the two countries will provide each other with U.S. dollars in the case of a financial crisis, such as the one that tipped Asia into recession in 1997.

Japan will provide as much as $10 billion in exchange for South Korean won, raising the limit from $7 billion, while South Korea will, for the first time, make as $5 billion available in exchange for Japanese yen. The agreement may help mend the two countries' diplomatic relations, the ministers said, which have been strained by Japanese Prime Minister Junichiro Koizumi's repeated visits to a controversial war shrine.

``The fact that we are able to create a cooperative policy network has deep historical meaning,'' said Han, at a press conference in Tokyo. ``We hope this meeting will help the two countries understand each other better and create an atmosphere where we can overcome past problems.''

``The fact that it's now a two-way agreement is symbolic and a positive step that may lead to further cooperation,'' said Atsushi Nakajima, chief economist at Mizuho Research Institute. ``A currency swap is still just a safety net for countries in the case of crisis, but I'm hopeful that this will lead to more forward-looking policy initiatives about how to get private- sector money flowing in the region.''

South Korea is Japan's third-biggest trading partner. The two countries hosted the World Cup soccer tournament in 2002, the first time ever that more than one country had hosted the quadrennial event.


Go here for the article.

The present,
Korea is a currency crisis?

Under the agreement, announced today by Japan's Sadakazu Tanigaki and South Korean's Han Duck Soo, the two countries will provide each other with U.S. dollars in the case of a financial crisis, such as the one that tipped Asia into recession in 1997.
Click to expand...

Hedge funds seem to have got the message about the magnitude of possible intervention in comparison to foreign currency reserves, from the announcement that has things to do with USD-KRW forex.

The won, which opened at 950.50 won, finished at 945.60 won to the dollar, up 8 won from the previous day's close, extending its climb for a fourth consecutive day.
Click to expand...

How far will it go, what will happen when it swings back.

Should bring about some criticism re. Japanese checkbook diplomacy, throwing money at the issue of reconcilliation rather than doing something positive etc. etc. Still, it's the Japanese diplomatic style, and it works, so why not go with it? Might go some way towards building trust between the two. Japan played an important role in getting out of the Asian financial crisis with its brand of multilateralism, behind the scenes diplomacy, and of course MONEY.

Somebody giving a lecture about an unfamilar topic.

Index said:
Should bring about some criticism re. Japanese checkbook diplomacy, throwing money at the issue of reconcilliation rather than doing something positive etc. etc.
Click to expand...

South Korea has over $200 billion foreign currency reserve now. They will run out of it all at the next currency crisis, and mere $10 billion additional "help" will not be the crucial one to rescue them.

Therefore, Japan's promise to give away $10 billion actually means that it will not do much to save North Korea's closest ally. Extra $3 billion was a pose of generousity to keep them from throwing "selfish militarist miser" tantrum.
Japan is allowed to make a decision on such kind of big issue only upon an approval by United States of course.

That was the message that hedge funds received.

What does that say about South Korea, only willing to go as far as half, should the tables turn?

窶督ｼ窶督ｳ窶堋ｵ said:
Somebody giving a lecture about an unfamilar topic.South Korea has over $200 billion foreign currency reserve now. They will run out of it all at the next currency crisis, and mere $10 billion additional "help" will not be the crucial one to rescue them.
Click to expand...

Perhaps you are referring to a different topic? I was not talking about the economic significance of $10b, but about the way Japan has sometimes been characterised as too soon relying on checkbook diplomacy at the expense of using other foreign policy designs, and how this initiative with the ROK may again be perceived as such. The issue of whether $10b is a significant sum or not is a different matter.

窶督ｼ窶督ｳ窶堋ｵ said:
Japan is allowed to make a decision on such kind of big issue only upon an approval by United States of course.
Click to expand...

In the first instance you seem to be implying that a "mere" $10b is an insignificant sum, yet here you say it is a big issue that needs US approval. Which is it?

Anyway, in regard to basing its foreign policy decision making processes on US interests, I would say that this is only the case when significant strategic US interests are involved. Even in such cases, I think Japan has enough understanding of its own strategic interests (and the US's), as well as the limitations of its foreign policy (for example reliance on US military capabilities) so as to not have to consult the US about what it can or cannot do or ask for "approval". Rather, Tokyo pragmatically avoids initiating policy designs that might be incongruous with those of Washington from the outright.

In regard to economic interests, Japan has demonstrated that is is able to make its own decisions and maintain it goals (even if it means redesigning its foreign policy to achieve objectives in a way that will not threaten Washington).

窶督ｼ窶督ｳ窶堋ｵ said:
Therefore, Japan's promise to give away $10 billion actually means that it will not do much to save North Korea's closest ally.
Click to expand...

! ! You're of course referring to South Korea still in this statement right? And by ally, you mean enemy right? Do you really contend that those in South Korea want to live under a mad military dictator?! Of course they both want apologies to the victims in their nations, but unless you live in some kind of cave then you surely know that North and South hate each other's guts in so many different ways and on so many levels!

Seeing as two very different governments which dislike each other intensely are both pushing Japan for apologies, yet get along on NOTHING else, that just MIGHT say to some people, "Hmm, maybe this is an issue that genuinely needs dealing with, since these two governments on political spectrum opposite sides agree on it"

There are some people who take their grudge against the Japanese because of the war too far, predominantly though because these people are somewhat emotionally infuriated having personally suffered or had family and/or friends that suffered. Now, allowing one's emotions to condemn a whole people is NOT right, but under the circumstances is perhaps understandable.

More moderate people (there are some in EVERY nation), still want compensation (understandably without question) for the atrocities, but do not see all the Japanese, (rather only a small minority used by a totalitarian government) as wicked people.

Still, with compensation (apologies and end of blatent denials; money is helpful, but it isn't what the human emotion revolves around, except according to cynicism) these moderate people will be perfectly appeased, and the emotionally charged people will be more inclined to trust the Japanese, which could furthermore lead to greater peace and prosperity between both nations. Furthermore, you should talk about it with some Japanese VETERANS who survived the war, as I think you might find many of them sympathetic to the atrocity victims, ESPECIALLY as most of these surviving veterans were not responsible for the atrocities and those that were tend to live with a bit of guilt about it. Understandably, and they're human and are not condemned for it at all, was not FULLY their fault, but mainly the fault of the totalitarian government in power in Japan during the war which twisted the minds of its citizens and used them, as most extremist governments, i.e. North Korea and communist China, tend to do; yet South Korea is a democracy, and the people of that nation do not want that kind of said oppression.

窶督ｼ窶督ｳ窶堋ｵ said:
Therefore, Japan's promise to give away $10 billion actually means that it will not do much to save North Korea's closest ally.
Click to expand...

That's preposterous! Everybody knows that the DPRK's closest ally is the US, followed closely by Japan, and only then by the ROK. :nuts: Makes you wonder what the purpose of tha demilitarized zone is? You know, the four kilometre no-man's land dividing North and South Korea? It must be a nature conservation park, kind of like a reserve, where humans don't tread for fear of harming the environment (read: stepping on a landmine ). Those 1.6 million or so troops guarding it are there to keep it clean too. 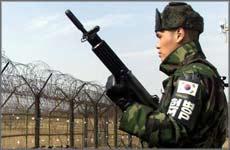 I guess they are such good allies that they decided there was no point in signing a formal peace treaty after the Korean War either. Let's keep everyone on their toes by maintaining a perpetual armistice. It's good for regional stability.

Ye, umm, actually South Korea has BIG problems with North Korea, and is considerably more inclined to work with Japan, though of course would understandably like apologies to its PEOPLE over the atrocities committed during Japan's occupation. I know that 窶督ｼ窶督ｳ窶堋ｵ also thinks this paper is written by a bunch of commies, but since I think 窶督ｼ窶督ｳ窶堋ｵ is a bit nationalistic at times I'm going to post this article from the Asahi Shimbun anyways:
http://www.asahi.com/english/Herald-asahi/TKY200604140134.html

It's been still going on:

The exchange rate of the won against the U.S. dollar has fallen to 910 won range for the first time in nine years and one month.
Click to expand...

Index, where did you get that hottie on the photo?