Hi, I'm a 37 y.o. italian woman from Italy: going through family's pictures I've found a picture of a Japanese young lady, dated 1977.1.3 .
Just said that nobody from my family has never been to Japan, nor any other contacts with japanese people (such as for work reasons, or travels, etc.) so I really wonder where this picture comes from, and also, just because I'm born with a strong passion for Japan (art, culture, food, etc.) for which even my family was a bit nervous about, thinking that maybe one day I'd been moving to Japan (thing I've never done, unfortunately).
So... I do not know how this picture is enden between the most old and precious family pictures, but I really would like to find this person to know more about all this.
If anyone can help it would be really appreciated.
Thank you, Elena. 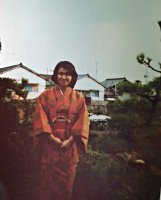 Well, a few thoughts, although you must realize this thread is a long (very long) shot at successfully finding out who that person in that photo is. Still, sometimes 'long shots' hit their targets.

So a few thoughts;

Given it dates as January 3rd, that image shows some mighty green stuff around that lady, so south is very possible.

That kimono indicates maybe some fancy event related to the New Year, meaning maybe she had just been to a jinja (temple).

What really has my attention, is that housing in the background really reminds me of military-associated housing that sprang up for off-base/off-post housing and maybe that is a hint.

Of course, if that sort of housing was common around military facilities the same companies that built that under contract to the U.S. military could also have been building the exact same structures for large corporations around large factories, except for one thing --- they are bigger than the average home for the average Japanese family in those days.

And that is a kind of odd location to be doing some sort of picture like that.

You are going to need to look for more hints in that collection of family pictures, or in other ways. We can make all sorts of guesses about what we see in that picture, as I have just done, but more information will be necessary.

Well, unless a sort of miracle happens and somebody visiting JREF sees that picture. Or maybe even a member recognizes that lady in that picture.

And now I have done a second post related to somebody looking for somebody. After all the many "Looking For" posts I passed up and now two in as many weeks --- this isn't a good sign for my side.