Does anyone here like Doricamu - Dreams Come True?
Well, I don't know them pretty well, but I like their songs a lot. :sing:

I just wanted to tell u that they have a website, where you can watch to videos, listen to the radio, among other cool stuff.

So if anyone wants to listen to the news about them but doesn't live in Japan...

Yoshida Miwa is BABE! She's got a big mouth though.

She did cosmetic comericals for Shiseido years back, I think.

Their hometown is up by me in Hokkaido. Just outside of Obihiro in a place called Ikeda-cho.

Miwa is very talented I think.

i like the band mostly because of her voice. :sing:

differently from the average female japanese singer, she's got a full voice (nihongo dewa 'hikui' tte yuu no kana?), besides strong, what makes her unique, in my opinion.

hikui = low or deep, but I wonder if it's used in this fashion like you mentioned for a "full" voice. hmmm

full, wide, varied = haba hiroi
But I wouldn't say haba hiroi for a voice. Dang, I just woke up sorry. I wonder if Miyuki will stop by

here's the explanation (i just asked my mom):

here's the explanation (i just asked my mom):

What do you think of them?

i start listening to them when i was in australia, and when i met my girl... she was leaving me for some travel for a couple of weeks, and dreams made me always happy, or sad...

i love there music, there voices, there just Great...

its not so POPIE, and maby thats what i like from them... one of my fav is the english one about walking in the snow... ( i cant understand Japanese Yet...)

this is a sample of there most known song :

Dreams come true made me better person, more sensative in some ways, but yeah whats wrong with that, ... Live is Beautiful,,, Enjoy it... Please

I have always been a fan and I really enjoy Miwa Yoshida's voice. I especially love "Winter Song", a popular selection with many of my karaoke friends, heh.

Dreams Come True's new Japanese language album, The Love Rocks, which was released February 22nd, is now the #1 album on the Oricon Charts!

I've download the album last week, and it's another great album again!!! Hope some others will listen to their music!

Thanks for making this thread! I hadn't heard of them.

I want to check them out now...

Song Jet, from the new album!!! tell us what you think of it?

I actually think that DTC is more mature than most Jpop jrock in here, so yeah just that people know it is not JPOP POP POP music!!! but just Really GOOD music, from one of the best selling japanese bands of the world with over 30million record sells

I'm not a major fan, but their music is quite good. I have the DELICIOUS cd. They're not qute to my taste, but they do have a very catchy sound.

You're right, they are much more mature than most Japanese pop that I've ever heard, probably because they've been around for so long. (My dad got their cd when he was in Japan somewhere between ten and seven years ago.)

Thanks for the link, Dutch! I still haven't been able to find any of their songs...

I found out that they even made a Dreams come true Arcade Game !!

It later became a Japanese Playstation game (April 2000, SLPM-86505) also released by Konami. It has the same base song list as the arcade version.

There is special feature called Greatest Hits mode, where you can insert the discs from The Soul and increase the number of songs you can dance to (Ano Natsu no Hanabi & LAT.43ﾂ≫?ｹN from Disc 1 and Mirai Yosouzu II & Sankyu from Disc 2). 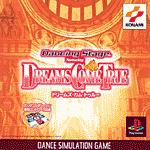 I WANNE HAVE IT 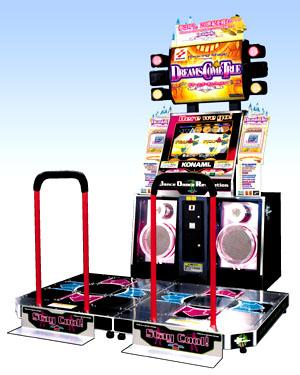 I just need to share this with you guys, because this is my All time favorite Dreams come true song, and the wedding song of me and Mayuko.

Kessen wa kinyoubi is my favourite.

( I already have this DVD and I LOVE IT!!! Miwa san is just WOW)

I am going to try to get some tickets for their concert in Osaka in September... DCT ROCKS!!!

I just watched their "Osaka Lover" video at their dctgarden.com, and I LOVED it!

I never expected that Miwa-chan would sing in Osaka-ben, but she can sing in English that well, why not in Osaka-ben?
The song is so cute that I keep listening to it over and over again.
Dutch-san, did you check it out yet?

I have checked the song out, and I like it a lot. It's funny that she sings in Kansai ben.

They have a new rollarcoaster in Universtal studio's Japan (Osaka), and in seats they have an inbuild speakerset, where people will hear "Osaka Lover".

Ah, thank you, Dutch san!
I love rollarcoaster, I'd really love to ride it!

I sang this Osaka Lover at Karaoke the other day, but it was a bit too hard for me! >_<

New single "Kimi ni shika kikoenai" & soundtrack will be released June 13th!
Dreams Come True's second single of 2007, Kimi ni shika kikoenai will be released June 13th! The movie soundtrack from which it's based is released the same day!
[Updated: Apr 19th]
"First Day Without You" to be ending song for "CSI:NY"!
"The First Day Without You -Japanese Version-" has been chosen to be the ending song for the Japanese broadcast of the popular American TV drama "CSI:NY".
[Apr 19th]

K
Question How to know if the Japanese person is a good person?