Did the internet exist before 1995?

Yes, it did. It was a U.S. government project that was then moved over to the scholars, for a very rough remembering of those days without looking it up. And that is easy to do --- look it up. I reckon all sorts of folks have written a lot of stuff about the late 60s and early 70s. In fact, we probably have some good material on the topic over at the ISOC. We better have.
M

When was Information Technology introduced as a course in universities? IT has relations with internet, right?
T

Most definitely, the IT world and The Net World are in the same room, in a manner of putting it.

By the way, the earliest commercial computer systems really were in these big, very cold rooms.

As for the history of the IT world, itself, I couldn't answer that. That wasn't my field all those many years ago. Plus my brain doesn't pull out information so well, anymore. I think it used to, but not quite so well these days. (Should that be good .or well?)
M

What is your field?
T

Uh oh! I hate going into that sort of territory. Let's just state I was into engineering in the aviation world.
M

Now that is an interesting question. I'm not so sure I much care for that field now, but I have been out of using engineering for a long time as a primary earning tool and staying alive tool. Even working on the private automobile just isn't the same as it was a fair bit back.

I suppose I like engineering now if somebody else with the proper knowledge is doing it. That sure isn't me, anymore. Unless it is some really easy to fix household ... well, now that isn't true, either. I pull apart computers sometimes to fix them. Maybe that isn't so bad.

But engineering isn't any different than any other skill, if you take pride in doing the work right. Details and pay attention and be prepared to think outside the box and you'll be successful in any field. Almost. A nice smile helps, too.

The US Navy had a kind of a private internet in a way of thinking. The computer that ran my network in 1970 was programed by turning toggle switches on and off. We could talk to many other stations using teletype keyboards with no monitors , just big rolls of paper. I could talk to other bases in Japan , Korea , Guam , Hawaii and South Vietnam. We worked in 8 hour shifts and on the midnight shift , often gossiped with each other over the teletype. It was a bit like Facebook with no pictures , LOL. I was stationed in Fukuoka/Hakata on the island of Kyushu for 2 years. Our job was to listen in on enemy communications and use direction finding to locate Russian nuke subs and bombers during the cold war. We were part of a giant spy system made up of all the military branches , CIA , NSA , DoD , DNI , and DIA. My old base in Fukuoka is now an amusement park. My first home computer was a Commodore 64 in the 80's that used a modem and telephone lines to hook into the internet.
Last edited: 4 Nov 2019

Sounds like you were on the ARPANET an ancestor to the internet. I was only on the internet since 1989 we used things like gopher, usenet, telnet to MUDs (text multi user games), archie (to find files), ftp, and some still hung on with uucp mail with bang paths though that was already closing down. I still have my Commodore 64 and it still works. Depending on what you call the internet you can say it has been around since the 60s. Public internet certainly since the 80s.
T

I still have a couple TRS80s and the big original floppies and some that are still in the wrapper and blank and some extra equipment that goes with a Trash80 work station and an original TRS80 manual that is huge. I haven't pulled them out of that top shelf for a number of years, though. They used to work. They came from the Yokota Base Library a long time ago. I didn't steal them. I think I was given them, but --- oh yes, as I am typing I am remembering how they came to me. Kind of a super low auction thing --- they do that at the bases/posts around Asia from time to time of stuff they don't want. I think even civilians are allowed to bid on things. Well, I don't think they'll sell you an old RF4. That was a bird I used to fly so long ago.

Anyway, old computers. They sure are different now. And just in three or four decades. And now you folks have them Star Trek machines. Except Spock and Kirk and them folks is retired now.

The computer and room where I worked 1971. 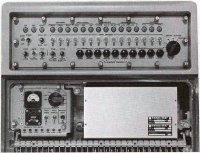 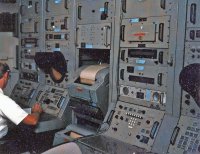 What does it do?

It was part of a US Navy network using high frequency direction finding to locate communist nuke submarines and nuke bombers and locate communist radio/communication stations. When they used morse code to send a message we could find their location usually within 100 yards to pinpoint them. Now days this is all done with satellites and the equipment pictured is long outdated.
T

It seems so strange that the topic is about communications, because when I saw that picture, Uncle Frank, for some reason the following I will copy from Wikipedia jumped into my mind:

During the Korean War, Vietnam War, Cold War and Gulf War, MARS was most known for its handling of "Marsgram" written messages and providing "phone patches" to allow overseas servicemen to contact their families at home.
Click to expand...

I mean, MARS, was so important for communications a fair number of years back. So, so, so important!

In fact, I also seem to remember special phone rooms where maybe 10 voting booth style stations would be where you could call home.

So strange how personal communications systems have advanced in this day-and-age. But particularly so for folks on duty far from the Land of the Big PX. (Sorry, most of you won't have a clue what that means.)

EDIT: That reminds me, didn't the Navy have its own Exchange Catalog?
Last edited: 24 Nov 2019

Hakata base was a small Army base with Navy , Marines , Air Force and even a Canadian group all keeping an eye on our cold war enemies. I used letters and cassette tapes to communicate back to Maine. Never once used the MARS group. Most bases had a Chaplain who used the Red Cross system for back home emergencies that came up. Hakata base had a small PX , but most things could be bought off base cheaper. Back when I was there one US dollar bought 360YEN and I got an extra $80 a month to live off base due to more people than bunks available. During WWII , the base was a large Japanese sea plane base and near by was a large prisoner of war camp. The main base was covered with high antennas of all kinds , so the HFDF base where I worked was a mile or two down the road from the main base to avoid interference. The building where I worked had a separate room for each different branch to work. We did 8 hour shifts for 6 days and then had 80 hours off. My second year in Fukuoka was like being in heaven. The Japanese girl I fell crazy in love with happened to have had a rich CEO father who left her a million dollars when he died young. We rented a nice house and traveled all over Kyushu when I had time off. When my 2 years there was up , the Navy got even with me , LOL , and sent me to Adak Island , closer to Russia then it was to Alaska. No women and nothing to do but eat , sleep , and work. After a year there , I sure was glad to get back to Maine.
Share:
Facebook Twitter Reddit Pinterest Tumblr WhatsApp Email Share Link