I just came across this little article about photographer Todd Anthony's latest photo series of Japanese dekotora, seems to be in promotion of their recent charity work. There's just a handful of images but they're quite interesting. I especially like the interior shots, these guys really put a lot of work and detail into the cab, mostly with textiles and decorative items, and they seem to favor more traditional-looking interior lighting like chandeliers. This serves as an interesting counterpoint to higher-tech exterior decoration. 1980's pachinko machine on the outside, baroque party on the inside. I also found another photo series of this same truck above: » Dekotora Style! | SNTRL

I looked up the organization, Utamaro-kai. Their website is pretty firmly stuck in the 90's (despite having been recently updated, Japanese web design leaves me bewildered once again), but I also found a nice short video that shows off several more dekotora, and you hear from Mr. Tajima and some of his members who were also part of the photo series.

Reminded me of トラック野郎 movie series.
I wish there were more enthusiasts around the world decorating their trucks like that (I believe the culture of decorating trucks is also prominent in India or Pakistan)
To me they are as much eyecandies as bosozoku-style bikes.

Now I have the image of Mike Cash driving around in one of those stuck in my head .

Uncle Frank said:
Now I have the image of Mike Cash driving around in one of those stuck in my head .
Click to expand...

I wouldn't be caught dead in one of those idiotic things. 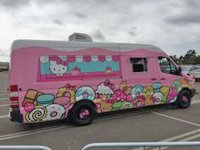 looking for Japanese futons online to decorate in future apartment