The Dewa33 Aratama Akiagari Junmai Ginjō is made of Dewa33 rice and is a seasonal sake only sold in autumn.

The Dewa33 Aratama Akiagari Junmai Ginjō (出羽燦々 純米吟醸 原酒 あら玉 あきあがり) is made of Dewa33 (出羽燦々 Dewa Sansan) rice produced in Yamagata and polished down to 50%. It has a moderate ginjō aroma, a matured, soft and broad taste, as well as a clean finish. It can be served chilled, at room temperature or lukewarm. It is a seasonal product and is limited in quantity.

Dewa33 rice is a Yamagata speciality and a new type of rice. It was first cultivated in 1995 by cross-breeding two other types of rice, Hanafubuki (華吹雪) and Miyama Nishiki (美山錦). Dewa33 was registered in 1997. To qualify for the Dewa33 denomination, the rice must be junmai ginjō grade milled to 55% minimum and yeast and koji must come from Yamagata, too. In 2016, sake made of Dewa33 received a geographical indication: GI Yamagata. (see the picture above). More information here. 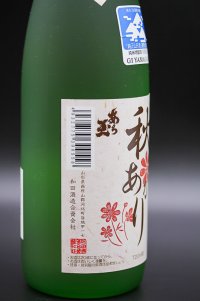 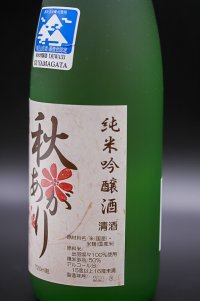 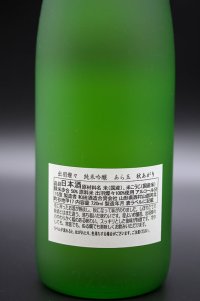 Kahoku-cho is situated at the heart of Yamagata Prefecture, with Mogami River which is affluent in water to the east, and Sagae River, a source of cool water, to the south. The land is blessed with natural surroundings, such as the permanently snow-covered Mount Gassan in the west, and the famous Zao in the south. Kahoku is famous for its rice and safflower production. The harvested safflower was transported to Kyōto by Kitamae boats and used for women's lipstick and as a dye in Kyōto culture. At that time, many of the Kyōto dolls were brought to Kahoku in exchange for safflower, and every year on the 2nd and 3rd of April, the town holds a hina market and a hina festival, one month after the regular hina matsuri.

Wada Brewery was established in 1797 in Yachi, Kahoku-cho, Yamagata. It is mentioned in the Tokōshōninkan (東講商人鑑), a merchant book written in the Edo period. The registered trademark "Aratama" is said to denote a happy occasion. "Aratama" (あら玉) is a makura kotoba in Japanese waka poetry referring to the New Year. The brewery aims at brewing high-quality sake in small quantities. Eighty per cent of the production is consumed locally. In the years between 1991 and 2019, Wada Brewery received 18 Gold Awards in the "National New Sake Contest" (全国新酒鑑評会). In 2019, the brewery received the highest award in the Ginjō category in the "Tohoku Sake Contest" (東北清酒鑑評会).
Share:
Facebook Twitter Reddit Pinterest Tumblr WhatsApp Email Share Link