A Tokubetsu Junmai produced of Kura no Hana rice in accordance with the traditional kimoto brewing technique.

The Tanaka Kimoto Manutsuru Tokubetsu Junmai (真鶴生モト特別純米酒) is produced of Kura no Hana (蔵の華), a shuzokotekimai (brewing rice) native to Miyagi Prefecture that was registered in 2000, polished down to 60%. For its Tokubetsu Junmai, Tanaka Shuzou employs the traditional kimoto method (see below). The rich kimoto flavour is enhanced when warmed as the moderate sourness emerges best when heated. 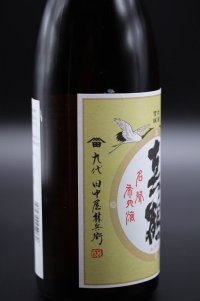 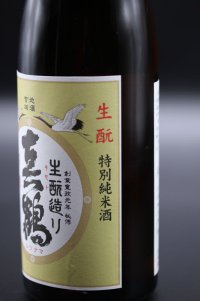 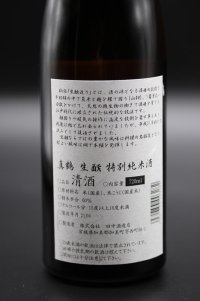 Tanaka Shuzōten (田中酒造店) is located in the Nakashinden area of the Kami District, Miyagi Prefecture, on a rich fertile plain, moistened with snow melting water from the Ōu Mountains (奥羽山脈), an area famous for its sake brewing. The brewery was founded by a dry goods dealer of the powerful Date clan, Tanaka Rinpei (田中林兵衛) in 1789. Tanaka Shuzōten implemented a variety of new initiatives in sake production, which resulted in a revival of kimoto brewing which lay dormant for some 67 years. The kimoto method poses quite a challenge even to experienced tōji (brewmaster) and was re-established by trial and error based on literature from the Edo period (1603-1868). Kimoto Junmai-shu is sake with good acidity, a firm taste, and a delicious flavour. After over a decade since the revival of the traditional method, Tanaka Shuzōten is the only brewery in Miyagi Prefecture employing the traditional method. Other initiatives include the Junmai Ginjō "Amane", a collaboration with a Japanese inn in Higashi-Naruko Onsen.
Share:
Facebook Twitter Reddit Pinterest Tumblr WhatsApp Email Share Link

This Tokubetsu Junmai is produced according to the Kimoto method, a traditional way of preparing the starter mash that involves using wooden poles to mix the mash. It has an intensive nose of boiled rice and koji with hints of caramel. A very complex taste paired with a light texture. Slightly spicy finish. One of the best Tokubetsu junmai we have had so far.
Upvote 0
Read more…