The Suzukagawa Junmai Ginjō has a gentle and elegant nose. The clear, muscat-like fruity sweetness and acidity give it a firm but clear impression, with a rich lingering finish.
Overview Reviews (1) Gallery
Leave a rating The Suzukagawa S Junmai Ginjō (鈴鹿川 【エス】 純米吟醸) has a gentle and elegant nose. The clear, muscat-like fruity sweetness and acidity give it a firm but clear impression, with a rich lingering finish. This junmai ginjō sake has a perfect balance of aroma and taste. It is recommended to serve it slightly chilled. 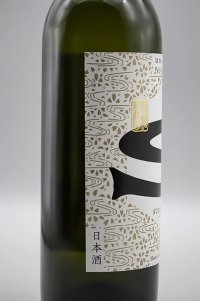 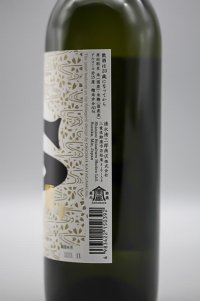 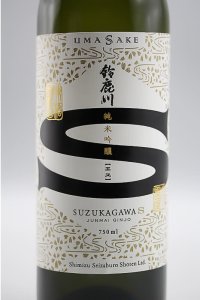 Shimizu Seizaburō Shōten was founded in 1869 in the village of Wakamatsu, Suzuka, Mie Prefecture.

Suzuka has long been known as Umasake Suzuka-no-kuni (味酒鈴鹿國, the land of delicious sake) because of the delectable sake it brews. An old book called, the Yamato-hime-no-Mikoto-no-Seiki (倭姫命世紀), describes the journey of Yamato-hime-no-Mikoto to Ise-jingū. She was ordered by Amaterasu-ōmikami (天照大御神) to find a place to settle down. In one of the passages, the phrase "I come from Umasake Suzuka-kuni" (私は味酒鈴鹿国から来た) is mentioned. Umasake has become an epithet for Suzuka, suggesting that the word has been widely known since ancient times.

The climate of Suzuka is very favourable for sake brewing. The limpid subsoil water from the Suzuka Mountains flows into the vast Ise Plain, where good quality rice is grown. Since ancient times, this rice and water have made it possible to brew delicious sake. Every year at Kawamata Shrine in the Suzuka River basin, a sake festival is held.

This is another splendid example of excellent Mie sake. The Sakuragawa Junmai Ginjo comes in a wine bottle (750ml) and with a label that seems only available at Aeon stores (yes, we did buy it at Aeon market in Toba). The label displays a pattern of Ise katagami (伊勢型紙), paper stencils used for dyeing textiles. It is made of Mienoyume rice, a variety approved in 2002, milled down to 60%. The colour is a very pale yellow. It has a very fruity nose with hints of strawberry and melon. Fragrant, fruity and sweet.
Upvote 0
Read more…