A limited edition Junmai Ginjō with a refreshing acidity, a well-balanced spiciness, and a mellow and gentle umami taste.

The Sasaichi Junmai Ginjō Gohyakugawa (笹一 純米吟醸 五百川) is a limited edition sake made 100% of Gohyakugawa rice grown in Yamanashi Prefecture. It has a refreshing acidity and a well-balanced spiciness, with a mellow and gentle umami taste that spreads pleasantly in the mouth.

Gohyakugawa is a relatively new type of sake rice. It has a short growing time, is short in height and can be harvested in August, making it less susceptible to typhoons. Its taste is also exquisite as it is based on "Koshihikari" (a cultivar of Japonica rice). Sasaichi Brewery exclusively uses Gohyakugawa rice grown in Yamanashi Prefecture for this Junmai Ginjō.

According to legend, in the Nanboku-chō period (1336-1392), Hagihime, the beautiful daughter of a Kyōto nobleman, was suffering from an incurable disease. Praying to Fudō Myōō, a Buddhist deity of wisdom, she was told to visit a sacred spring along Gohyakugawa River in present-day Fukushima Prefecture. The waters of the spring were thought to cure certain diseases. Hagihime is regarded as the founder of the hot spring resort of Bandai Atami Onsen (磐梯熱海温泉). The rice by the same name was first grown in that region and named after the nearby river. 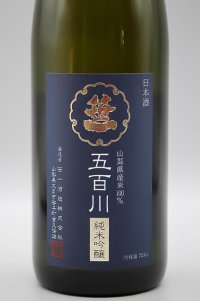 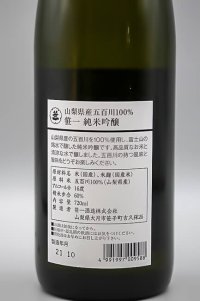 Sasaichi Sake Brewery is located in Ōtsuki, Yamanashi Prefecture, at the foot of the Sasago Pass and was founded in 1661 under the name Hanadaya (花田屋). In 1919, the tōji Amano Hisa (天野久) changed the name to Sasaichi. The brewery dismantled mass production facilities after finishing the 2013 production, and it returned to the traditional methods of kōji mould creation. To convert the mass production facilities to equipment for manufacturing high-quality premium sake, Sasaichi introduced modern rice washing machines and steaming ginjō baskets and two Sase style and Nagata style sake pressing machines, achieving a drastic increase in sake quality. The brewery uses water taken from its private well and locally-cultivated rice varieties suited to sake production such as Yamada Nishiki and Yume Sansui grown by contracted farmers, to produce its sake by hand. Sasaichi produces sake, shochu, wine and liqueurs.
Share:
Facebook Twitter Reddit Pinterest Tumblr WhatsApp Email Share Link

This is the fourth Sasaichi we had the pleasure to savour, and we loved it. We paired it with hodate (scallops) fried in miso-butter sauce and chestnut rice. The Gohyakugawa has an outstanding balance of spiciness and acidity with a nose of fungi and hints of marzipan. Very earthy, yeasty and slightly sweet, spicy finish. Exquisite!
Upvote 0
Read more…