A Niigata Tanrei, refreshing on the palate, with a hint of floral note and a soft, elegant taste. The brewery describes the Manotsuru Karakuchi Ginjō (真野鶴 辛口吟醸) as an all-rounder suitable for a group of people with different tastes. This clear, basic Niigata tanrei ginjō has a ginjō aroma that envelops softly. The dry sake is refreshing on the palate, with a hint of floral notes. Chilled, it has a soft, elegant taste, but at room temperature, it goes down the throat with ease. At any temperature, the sake retains its clarity and the character of Niigata Tanrei. 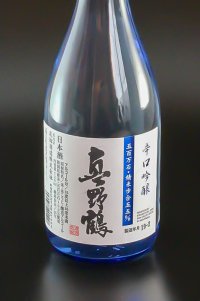 Obata Shuzō was founded by Obata Yosozaku in 1885 on the island of Sado off the coast of Niigata. With its world-famous rice and pure, soft groundwater, Sado is an ideal place for sake production. The kura is still owned and managed by the Obata family. The tōji (master brewer) is Kudō Kenya (工藤賢也), born 1971, who apprenticed under Maho Matsui, another famed tōji. For more than ten decades, Obata Shuzō's brewers have spent the whole brewing season in winter at the brewery to take care of sake throughout the day and brewed traditionally handcrafted sake.

Since 2009, the brewery has been devoting its efforts to produce premium sake (特定名称酒 tokutei meishō-shu) to create higher quality sake. In 2003, Obata Shuzō started to export to 15 countries, including the United States, Hong Kong, Singapore, and it is also installed in Air France's first-class and JR East "Shikishima". Manotsuru has been receiving gold medals at the National New Sake Awards for six consecutive years and the world-renowned International Wine Challenge (IWC). The Obata family crest consists of four diamonds representing the three elements crucial in sake brewing: rice, water and humans; in addition, the brewery also takes climate and nature (terroir) into account. Its motto is shihōwajō (四宝和醸) which translates to "brewing well-balanced sake by harmonising the principles of the four diamonds."

This is a dry ginjo that is only available in the autumn. It has a nose of green and straw, and is very refreshing and light on the palate. Dry, crisp, and slightly astringent finish.
Upvote 0
Read more…