The Kamotsuru Tokubetsu Honjōzō Chōtokusen Tokutō is a traditional honjozō that goes well with food with a balanced flavour profile; it can be enjoyed cold or warm.

The brewery describes the Kamotsuru tokubetsu honjōzō chōtokusen tokutō (賀茂鶴造特別本醸造超特撰特等) as a traditional honjozō that goes well with food with a balanced flavour profile. It can be enjoyed cold or warm and is recommended with meals. It has a soft mouthfeel with a delicious aftertaste. This is a typical Kamotsuru brew with its unique characteristics. 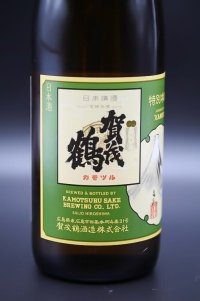 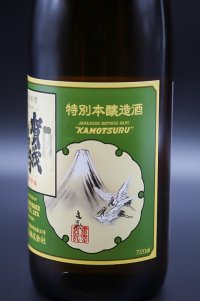 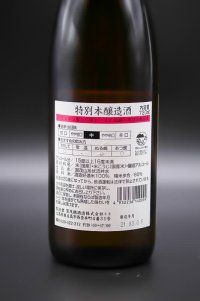 Kamotsuru Sake Brewery is located in Saijō, Higashihiroshima. Originally a soy sauce manufacturer, the business was later converted into a sake brewery. In 1873, Kimura Wahei (木村和平) named the brewery Kamotsuru (賀茂鶴). The name Kamo is the place name and another word for sake, meaning "to produce sake", combined with the word "crane". On the label, two cranes and Mount Fuji represent trust and the best quality. In 1892, Wahei's son, Shizuhiko (木村静彦), became the first president of the company and began to develop the organisation, marketing, and the export overseas. Kamotsuru Sake Brewery was formally established in 1928 as a joint-stock company. In 1951, the Tokyo branch office was opened. In 1958, the company released a gold leaf, Daiginjō called "Tokusai Gold Kamotsuru" (特製ゴールド賀茂鶴). This made the company a household name throughout Japan. At the same time, Saijō came to be known as a brewing region on a par with Fushimi and Nada. The company's products are served at sushi restaurants such as Sukiyabashi Jirō (すきやばし次郎), Sushi Mizutani (鮨水谷) and Sushi Matsunami (鮨松波), all of which are affiliated with Yoshino.

The No. 2 and No. 8 breweries in the head office are traditional breweries where ginjō and higher-grade sake are made, and the wooden steamer used to steam the rice during brewing is the largest in Japan. The steamer is made of Yoshino cedar every six to seven years. In 1963, the company registered the trademark of the names of historical figures such as Ako Gishi (赤穂義士), Shizuka Gozen (静御前), Ishikawa Takuboku (石川啄木), etc., with sake as the designated product.
Share:
Facebook Twitter Reddit Pinterest Tumblr WhatsApp Email Share Link