The Kaganoi Higurashi Junmai Daiginjō (加賀の井 ひぐらし 純米大吟) is made of domestic rice milled down to 50%. It is described as not too spicy and slightly sweet, with a soft and nice aroma. 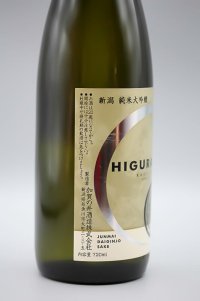 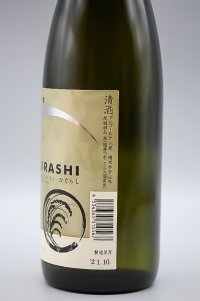 Kaganoi Brewery is located in Itoigawa, Niigata Prefecture. It was founded in 1650 when Kobayashi Kurozaemon (小林九郎左ェ門) took over the liquor store from the Kogazaka family and started making sake. In 1652, Kaga Domain's established its Itoigawa main office on the Kobayashi family estate. During the Sankin-kōtai (参覲交代/参覲交替), the alternate residence system, when daimyō had to spend each other year in the capital, long processions from Kaga Domain would pass through the area. Maeda Toshitsune (前田利常, 1594-1658), the third Kaga lord, was so pleased with the sake presented to him that he allowed the name Kaga to be used, even though it was not from Kaga. He named it Kaganoi (加賀の井). The Kobayashi family, who also served as the head of the shrine and the head of the town of Itoigawa, carried on the business until the end of the Edo period. Sake brewing was carried out in the existing warehouse on the premises (now used as a shipping warehouse). From 1782 onwards, records show that the sake was often presented to the Kaga clan and its branch clans from the Daishōji (大聖寺藩) and Toyama (富山藩) domains, along with records of their lodgings, and that it was also used as part of the feudal lord's and retainer's menu. In 1953, the brewery was incorporated. Nowadays, the brewery is in the hands of the 18th generation of the Kobayashi family. On 22 December 2016, a fire broke out in the shopping district of Itoigawa, close to the train station. Due to the densely developed area and strong winds, it took 30 hours to extinguish the fire: in the end, 147 houses, shops, and the Kaganoi Sake Brewery were reduced to ashes. Its new brewery building, built on the same spot where the old brewery stood for 360 years, was completed in spring 2018.
Share:
Facebook Twitter Reddit Pinterest Tumblr WhatsApp Email Share Link

The Kaganoi Sake Brewery has a base of loyal followers who supported the brewery after its production site burned down in 2016. They resumed production only two years later. The Higurashi is a surprisingly inexpensive junmai daiginjo: its nose is not fruity but comes with a hint of fungi and a moderate scent. Not too sweet, it has a slightly spicy and alcoholic finish. Mild.
Upvote 0
Read more…