Imada's Fukucho Seafood Junmai is made of Hattansō rice grown in Akitakada. It has the refreshing acidity of white koji, making it perfect for pairing with oysters and seafood, and a refreshing lemon-like taste.
Overview Reviews (1) Gallery
Leave a rating Imada's Fukucho Seafood Junmai (富久長 海風土 Seafood 純米) is made of Hattansō rice grown in Akitakada. It has the refreshing acidity of white koji, making it perfect for pairing with oysters and seafood, and a refreshing lemon-like taste. The crisp acidity and soft alcoholic aftertaste complement the savouriness of oysters and seafood. The high acidity and the light mouthfeel combined with an alcohol content of 13% make it an excellent match not only for Japanese food but also for Italian and French cuisine. Enjoy it chilled, just like white wine, as each bottle is carefully pasteurised and stored to preserve the freshly pressed flavour. Store in the refrigerator to protect the flavour. 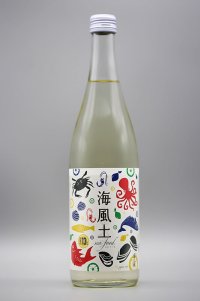 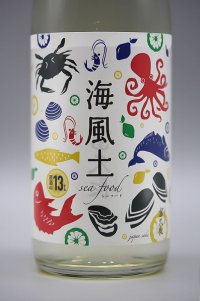 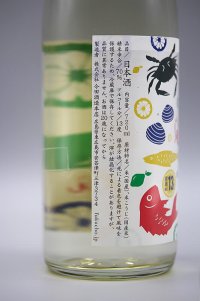 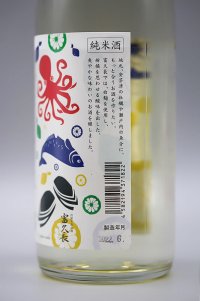 Imada Brewery is located in Akitsu, Higashi-Hiroshima, facing the Seto Inland Sea and was founded in 1868. Hiroshima is one of Japan's top regions of sake production; the prefecture ranks among the top six in terms of annual sake production. The region is famous for its soft water and smooth sake with a solid, lively fragrance. The brewery is run in the fifth generation by Imada Miho (今田美穂), one of the few female tōji (brewmaster) in Japan. She learned the trade from her father, Imada Yukinao, but also enrolled in the National Research Institute of Brewing and later graduated from Meiji University's law faculty. After working for the cultural activities section in a Tokyo department store, she returned to Hiroshima and took over the brewery. In 2020, the BBC included her in their list of the world's 100 influential women of the year.

Hiroshima is renowned for its ginjō-style sake varieties with beautiful fragrances and refined flavour. Imada Miho has continued and perfected the art of ginjō. In 2017, her Fukuchō ginjō won the platinum award for Junmai sake at Kura Master 2017, an annual contest selecting the best sakes from over 550 sake brands across Japan. Imada also experimented with heirloom rice varieties that had been out of use for centuries, created her own hybrid yeast starter, and experimented with white kōji. Fukucho's Junmai Seafood has all the hallmarks of Imada Shuzo's delicate brews and more: created especially to be enjoyed with seafood, it has a striking sourness derived from white kōji (白麹). Combined with Hattansou, long-forgotten local rice revived by the brewery that adds creamy notes, it results in an outstanding citric acidity. The Seafood should be served chilled at around 16°C to enhance its refreshing lemon flavour. It gets more well-rounded at higher temperatures. The brewery recommends pairing it with oysters. We enjoyed it with edozushi, sushi with salt and lemon (not, as is standard fare, with soy sauce and wasabi condiment), and it was a heavenly match. I would imagine that deep-fried frutti di mare, like calamari fritti, work well, too, as would sweet desserts.