A clear and refreshing jumaishu prepared for the autumn season.

The Endo Hiyaoroshi Keiryū Junmai (株式 渓流 ひやおろし 純米酒) is brewed in the cold and laid down gently in the brewery to mature quietly throughout the spring and summer. The brewmasters wait for the cooler weather to start and pack it fresh for the autumn season. Hiyaoroshi is a perfect match for sanma (Pacific saury), mushrooms and other autumnal delicacies. The brewery describes it as clear and refreshing. It should be consumed chilled, at room temperature, or lukewarm.

What is Hiyaoroshi?
Sake is usually heated twice in the production process. Hiyaoroshi means that the new sake is brewed in cold weather, heated once, then stored and matured in a cool storehouse during the spring and summer months, before being bottled in the autumn without a second heating. Hiyaoroshi is full of umami and has a mellow and mature taste. Hiyaoroshi is at its best with the arrival of autumn. Around the middle of the Edo period (1603-1868), Hiyaoroshi was transferred from the large vats used for storing it to wooden barrels and packed in the barrels, hence the name "Oroshi" (cold transfer). 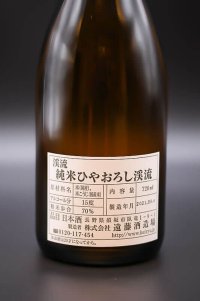 Located in Suzaka, Nagano Prefecture, the brewery was founded in 1864 for the local Suzaka clan and began to supply sake to the clan's head. Since then, from the second to the fifth generation, we have inherited the intention of the first brewer, Endo Tokusaburo (遠藤徳三郎), to make delicious sake and continue to make sake to brew and nurture. Although our leading brand "Yoro Masamune" has been awarded the Medal with Yellow Ribbon, we could not take advantage of the sake boom in the 1970s, and as a small brewery, Endo struggled to keep their quality. In 1982, the sixth generation, Endo Shuzaburo (遠藤秀三郎), became the head of the brewery at the young age of 21. At this time, there were only three employees. While starting to improve existing products, the brewery launched one of its leading brands, "Keiryū", in 1988. This was followed by a series of new brands, including the still popular Asashibori and Domuroku and Naotora and Comet.

A classic junmai, almost colourless. We enjoyed it without food and with sashimi the next day, and it was most delectable in both sittings. The nose showed notes of cereal, nuts, and, no surprise, alcohol. Slightly sweet and medium-dry, with hints of marzipan, it had a strong finish. It was formidably paired with sashimi.
Upvote 0
Read more…