Journal entry Discussion
Leave a rating
Kanazawa Hakkei (金沢八景) is an area in Kanazawa-ku (southern Yokohama) that attained fame through its woodblock print depictions by Hiroshige and other ukiyo-e artists. Kanazawa Hakkei refers to a series of eight scenic views that immortalise the breathtaking landscape and picturesque coast around Hirakata Bay that disappeared at the end of the Edo Period. Accessible via Kanazawa-Hakkei Station on Keikyū Line, several interesting cultural and historical attractions make a visit worthwhile. A stroll around Kanazawa Hakkei can be combined with a visit to the Yokohama Hakkeijima Sea Paradise or Kanazawa Bunko.

Via Keikyū Line or Yokohama Blue Line at Yokohama Station, it takes about 20-30 minutes to Kanazawa-Hakkei Station. From there, you can walk the round course outlined below in about three hours, depending on how much time you spend at each of the following sightseeing locations:


Seto Shrine (瀬戸神社), formally known as Seto Mishima Myōjin (瀬戸三島明神), is some 100 metres northeast of Kanazawa-Hakkei Station. In 1180, Minamoto no Yoritomo invited the priests of Izu Mishima Myōjin (伊豆三島明), who had given him blessings when Yoritomo raised his army in Izu, to build a shrine in this area. In the Muromachi period (1336-1573), it was customary for the Kamakura kubō (鎌倉公方) to visit the shrine once a year. The principal deity enshrined is Ōyamazumi no Kami (大山祇神); other kami include Susanoo no Mikoto and Sugawara no Michizane. The shrine is an Important Cultural Property (重要文化財（国指定)). 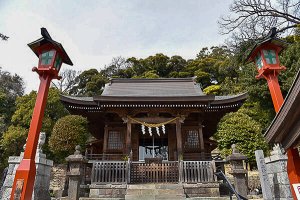 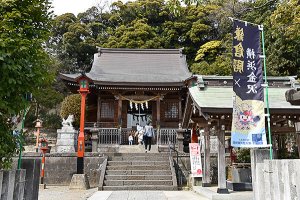 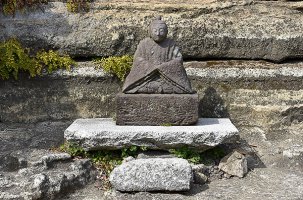 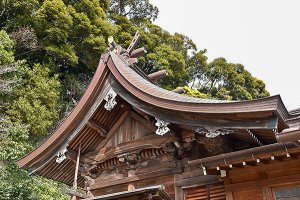 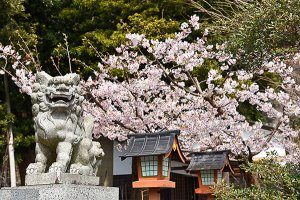 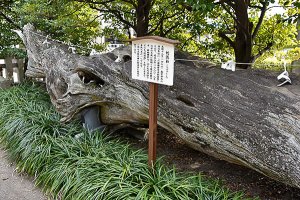 
Biwajima Shrine (琵琶島神社) is a tutelary shrine of Seto-jinja located adjacent to Seto Shrine across R16. In 1180, when Minamoto no Yoritomo built Seto Shrine invoking Mishima Myōjin, his wife Hōjō Masako erected this small shrine worshipping Chikubujima Benzaiten (竹生島弁財天) from Lake Biwa on a tiny islet island in Hirakata Bay. The kami is also known as Risshin Benzaiten (立身弁財天) for its standing posture, and Biwajima Benzaiten (琵琶島弁財天) as the island resembles a biwa (Japanese lute). 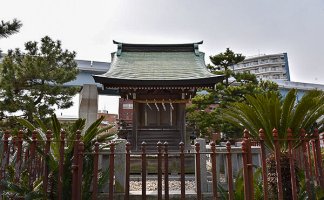 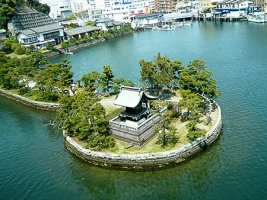 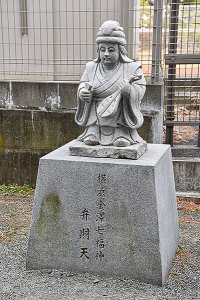 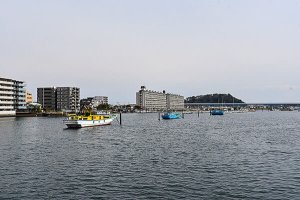 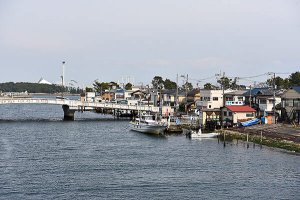 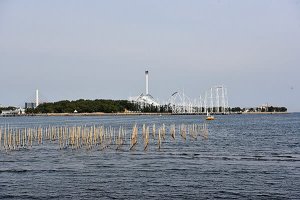 
To reach Suzaki Shrine (洲崎神社), visitors have to cross Seto Bridge (瀬戸橋) and turn left at a slab commemorating the creation of the Meiji Constitution (明治憲法草創之處碑). If you follow the road, Suzaki Shrine will be on your right. Initially, the shrine stood in a village called Nagahama, which was swept away by a tsunami, and was rebuilt at its current location. 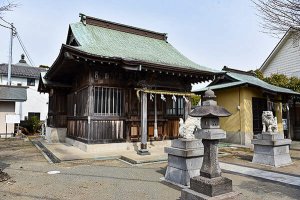 
Just a stone's throw further lies Ryūgenji (龍華寺), the head temple of the Omuro school of Shingon Buddhism, officially known as Chisokusan Ryūgenji (知足山龍華寺). The principal object of worship is Dainichi Nyorai. In 1591, when Tokugawa Ieyasu stayed at the temple, he was mistakenly told that the temple's name was "Ryūgenji" (spelt with the Chinese characters 立源氏). Still, Ieyasu was pleased and donated five koku (stones) to the temple's territory, as "Ryūgenji" (立源氏) was an auspicious name. From then on, the temple was known as Ryūgenji to the public and the temple magistrates throughout the Edo period.

The temple was established in 1499 by Yūben (融辨), a disciple of Inyū (印融), who merged two temples that had fallen into disrepair, Mutsuura Joganji (六浦浄願寺) and Kanazawa Kotokuji (金沢光徳寺), while its founder was Kanno Sukekata (菅野資方), a prominent vassal of the Ōgiya-Uesugi clan. As the head temple of the 25 Omuro Shingon temples in Mutsuura (六浦庄, roughly the same area as present-day Kanazawa Ward), Ryūgenji was prominent and influential within the school. Its origins probably date back to the early Kamakura period, when Musashi Province was under Ninnaji Shohoin (仁和寺). Shohoin was headed by Jōgyō (貞暁), an illegitimate son of Minamoto no Yoritomo. Following the death of Hōjō Sanetoki in 1276, the Kanazawa Hōjō clan appears to have taken complete control of Mutsuura.

At the time of its foundation, Ryūgenji was supported by the Kanno clan, vassals of the Ōgiya-Uesugi (who erected the principal image and temple buildings) and the Furuoya clan (古尾谷), who donated the temple bell, but at the end of the Sengoku period, the local Yamaguchi clan became the custodians. In the Edo period, it became the family temple of the Nagashima (永島) family, which settled in Nojima (野島) and flourished as one of the leading temples and shrines in Kanazawa along with Shōmyōji and Seto Shrine.

Ryūgenji burned down on 19 March 1826 but was rebuilt by Nagashima Kamesu (永島亀巣). It was again destroyed in the Great Kanto Earthquake in 1923. The temple's treasures survived the fire, and although small in size, there are sculptures from various periods, including a lacquered bodhisattva from the Nara period. The temple owns several valuable paintings, many sacred texts, and archives designated cultural assets. 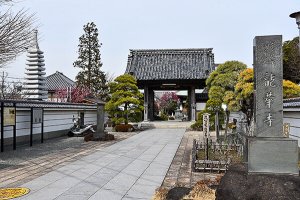 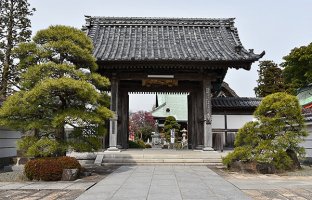 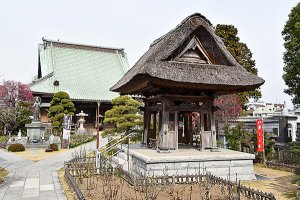 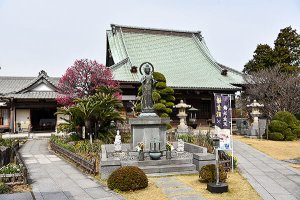 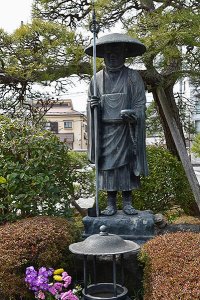 
Nojima Park (野島公園) is one of the famous sceneries of the Kanazawa Hakkei, depicted in the Glowing sunset at Nojima (野島夕照 Nojima no sekishō). Nojima is a small island in Hirakata Bay, a few hundred metres from Ryūgenji, across Nojima Bridge. There are campsites, barbecue areas and a baseball field. From the central observatory, it is possible to see the Boso Peninsula in Chiba and Mount Fuji. 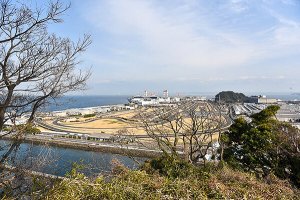 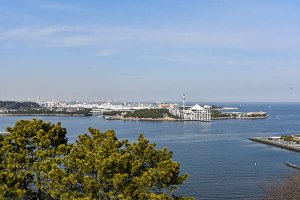 
Also located in Nojima Park is the former villa of Japan's first Prime Minister, Itō Hirobumi. The 'Former Kanazawa Villa of Itō Hirobumi' (旧伊藤博文金沢別邸) was built in 1898. Apparently, Hirobumi was thrilled by the scenic beauty of the area and welcomed Emperor Taishō and the Crown Prince of Korea at his summer residence. During the Meiji period, the area around Kanazawa, including Tomioka, became popular for beach villas. Later, Oiso and Hayama prospered as vacation home areas, and Kanazawa finished its role.

Itō Hirobumi's villa is one of that era's few surviving architectural remains. In November 2006, it was designated a Tangible Cultural Property of Yokohama and completely restored. The exhibits comprise materials and furnishings related to Itō Hirobumi's life and family. The garden offers a panoramic view of the surrounding sea and sights of seasonal flora, such as the Kanazawa peony. 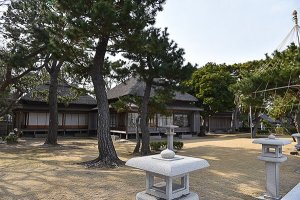 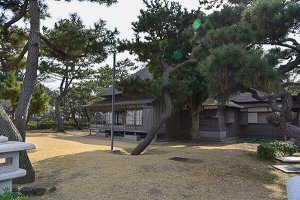 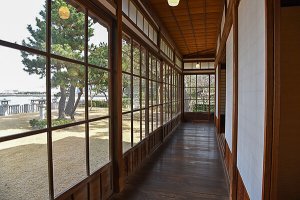 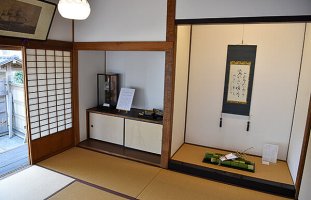 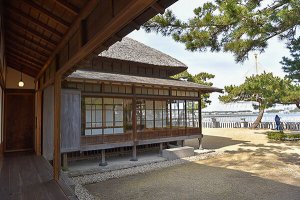 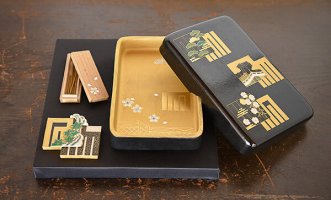 ​
Photographies of Itō Hirobumi and his wife Umeko (伊藤梅子), a former geisha from Shimonoseki. 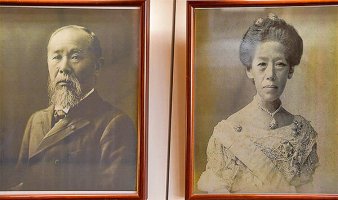 A curious glance at the most private facilities and their functionality before running water was introduced. 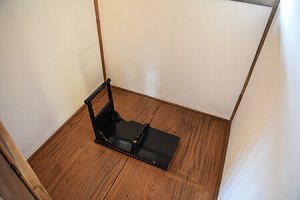 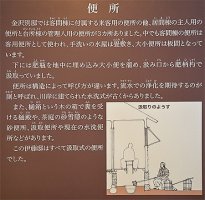 From Nojima Park, you can either walk back to Kanazawa Hakkei Station (some 1.2 kilometres) or take a train at Nojimakōen Station (Seaside Line).