His uncle Yoshida Daisuke was a descendant of the famous Yamaga Sokō (山鹿 素行, 1622–1685), a philosopher, strategist and stout Confucian, who became a leading authority in matters of samurai conduct, and of higher social standing than the Sugi family. The Yoshida family belonged to Yamagaryū (山鹿流), the school founded by Yamaga Sokō and followed his teachings of Confucianism and emperor worship. At the age of five Shōin started to study tactics and military science by order of the local damiyō, and at the age of eight he was enrolled in the meirinkan (明倫館), the school of the Chōshū Domain, one of the three major educational institutions in Japan during the Tokugawa Period. Yoshida lived partly with the Sugi family and some of his tutors and continued his military studies until 1846 when he graduated with a diploma in the Nagamuna style of military science. He was instructed in gunnery and rangaku (蘭学, “Dutch learning” or Western Studies in the Dutch language). The word about his expertise on military tactics and European warfare reached the Mōri damiyō, who came to visit his annual series of lectures and admired the maps drawn by him and his disciples. Cave in Shimoda, Izu Peninsula, where Yoshida Shōin and his companion Kaneko Shigenosuke were hiding before boarding the USS Powhatan

After his graduation in 1848, he took up a position as a teacher at the meirinkan and published a series of books on his journeys as well as on military matters and administration. In 1851, at the age of twenty-one, Shōin accompanied his lord to Edo, where he studied under Sakuma Shōzan, the most celebrated Western military scientist in Japan. He spent most of the time travelling extensively through Japan. As his travels were not authorised by the han (藩, fief), Yoshida Shōin was arrested upon arrival in Edo after a journey to Mito, Aizu and Hirosaki and sent back to Hagi, where he was placed under house arrest at his father’s home, banned to leave the domain for ten years. As a consequence of his unsanctioned voyages, he lost his title and his stipend. It can safely be assumed that Yoshida Shōin’s views of the Western powers were ambivalent: on the one hand, he was very well aware of the Western encroachment in Asia, especially after China’s defeat in the Opium War, on the other, his studies on European warfare had convinced him that Japan needed to learn the ways of the West. After having been deprived of his samurai status, he and his friends must have reached the conclusion that their future lay in exploring those foreign lands barred to Japanese by the bakufu‘s strict policies. Commodore Perry's flagship, the USS Powhatan, as seen by a Japanese artist

Late in 1853, he planned to board the Russian frigate Pallada under Yevfimy Putyatin, but when he reached Nagasaki, the Russian flotilla had already set sail. In July 1853, Commodore Perry had entered Japan with a squadron of four “black ships”, forcing Japan to open to American and international trade. When Perry returned on his second expedition to Japan in 1854, Shōin and his companion Kaneko Shigenosuke (金子重之輔) tried to board the USS Powhatan in the harbour at Shimoda but were sent back by the American officers, who followed the terms of their agreement with the Japanese. Shōin and Kaneko surrendered themselves to the village head and were arrested, not before they managed to hand over a letter written in literary Chinese to the Americans explaining their intentions.

Perry would never know Yoshida Shōin’s name and fate but was very concerned about the two Japanese who were caged and sent to Edo. Shōin was sentenced to jail, then sent back to Hagi, where he spent a year in prison and was again placed under house arrest. During his time in jail and confinement, he started to teach his fellow convicts and neighbourhood children. In 1857, he was permitted by the daimyō to teach at a private academy by the name of shoka sonjuku (松下村塾). 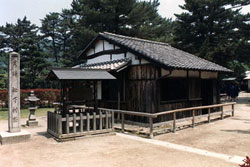 Shōka sonjuku (松下村塾) in Hagi
When Shōin was living under house arrest with the Sugi family, he was teaching at a small annexe to the main building. In the summer of 1857, Shōin became a teacher at shōka sonjuku, the school of his uncle Tamaki. In the beginning, there were only three students, but that number soon increased to 25. Many candidates had to be refused due to lack of space. Shōin was very meticulous in selecting his disciples, and when he declined a student, it was final.
On the other hand, he was willing to sacrifice for his students, being at their academic disposal day and night. Shōin did not accept tuition (月谢 gessha), just donations in food. He could live on the stipend he received from the daimyō. In 1858, the daimyō admitted him to teach military sciences at the Yamagaryū (山鹿流. Shōin remained curious about the West throughout his short life.

Shijuku (私塾) were private schools established in the late 18th and early 19th century. Essential in shijuku was a strong individualism and a tendency towards innovative and progressive teaching, as they were independent of the bakuhan (幕藩体制, the feudal system characteristic of the shogunate). Since those schools were not under official supervision, their curriculum was free of official interference and depended on the specific interests and expertise of the school’s principal. These characteristics could certainly be found in the shoka sonjuku, too: there were no social or geographical limitations. Most of the students originated from urban merchant families or families of wealthy farmers or Buddhist priests, who could afford the required registration fee.

The shōka sonjuku was established in 1842 by Tamaki Bunnoshin (玉木文之進) as a private elementary school. When Tamaki Bunnoshin left on an official mission, Kubo Gorozaemon (久保五郎左衛門) took over as principal until 1857. From then until his incarceration, Yoshida Shōin was the head of the school, introducing new subjects such as economics and politics. The formal establishment of Yoshida Shōin Shōka Sonjuku took place in November 1857. Later on, Tamaki and Shōin’s brother Sugi Umetaro （杉梅太郎) administrated the school until its closure in 1892. In 1922, it was designated a National Historic Landmark.

The school is renowned for the scores of historical figures that went through it, all of them born in Hagi, many of them taught by Shōin and pivotal in their role of reshaping the fate of Japan: Itō Hirobumi, Yamagata Aritomo, Kido Takayoshi, Inoue Kaoru, Takasugi Shinsaku, to name just a few.

Based on a few selected remarks Shōin had made after he was refused aboard Perry’s ships, some Japanese scholars (Kawaguchi Masaaki, “Shimoda tokai kō”) suggested that it might have been his intention to kill Perry. While these remarks may have been caused by the grief or anger of being rejected, it can be assumed that Shōin’s intentions were idealistic and patriotic at the same time: to acquire cultural and technological knowledge deemed essential to modernise Japan. Influenced by his mentor Sakuma Shōzan, Shōin and other intellectuals reached a conclusion that “Dutch learning” was no longer sufficient to stay on top of developments in other countries like America, Russia and England, whose ships laid anchor at Japanese ports at an increasing rate. Sakuma’s and also Shōin’s view was that the only way to “keep the barbarians at bay was to learn the barbarians’ advanced military technology”. Shōin conceived the long-term strategy of appeasing the Western nations by strictly observing the treaties signed with them, while at the same time strengthening Japan’s military power and seizing control over Ezo (蝦夷, Hokkaidō), Manchuria and Korea. Ultimately, Japan would become invincible and “crush America and defeat Europe”.

Albeit admiring the West, Yoshida Shōin despised the bakufu‘s policy of appeasement. While at first sympathetic to the idea of unity between the imperial court in Kyoto and the shogunate in Edo (公武合体 kōbu gattai), he reshifted his political views and supported the sonnō jōi (尊皇攘夷 “Revere the Emperor, Expel the Barbarians”) movement, when he learned the news that Ii Naosuke (井伊直弼), the daimyō of Hikone and regent (大老 tairō) of the Tokugawa bakuhan, signed the U.S.-Japanese Trade Treaty without imperial consent. When Ii Naosuke started to stifle and apprehend sonnō jōi members, many among them his disciples, Shōin decided to act: he drilled lower-ranking samurai and commoners and organised them in mixed shotai (小隊, “platoon”) rifle companies (a revolutionary concept from a military as well as a social point of view), but his calls for a nation-wide rebellion were never answered: Shōin was arrested, brought to Edo and accused of plotting to ambush and assassinate Manobe Norikatsu (間部詮勝), a councillor under Ii Naosuke. He and some of his student followers were sentenced to death. Shōin was decapitated on November 21, 1859.

His body was buried in the Shimoyashiki grounds of the Ekoin cemetery in Edo, and four years later, in 1863, finally laid to rest in the Setagaya cemetery. He is enshrined in Shōin-jinja in Wakabayashi, Setagaya-ku as well as in his birthplace Hagi in Yamaguchi Prefecture. Shōin Jinja in Setagaya and Hagi

Next article in the series 'Historical Biographies': Takasugi Shinsaku