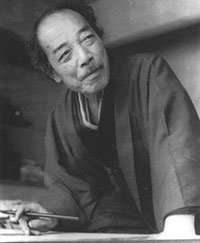 Yokoyama Taikan (横山大観, 2 November 1868 - 26 February 1958), nom de plume of Sakai Hidezō (酒井秀歳) or Hidematsu (酒井秀松) was one of the first Japanese painters to be involved in the development of a modern Japanese painting style called Nihonga (日本画).

Taikan was the son of Sakai Sutehiko (酒井捨彦), a retainer in the service of the Mito-Tokugawa, who was struggling to make a living by trading sake after the Meiji Restoration. When Taikan reached adulthood, he adopted his mother's surname Yokoyama and changed his first name to Hidemaro (秀麿). He attended the Tōkyō School of English, founded in 1885 to prepare for a government career but, at the same time, took drawing lessons with Watanabe Bunzaburō (渡辺文三郎, 1853-1936). Upon graduation, he chose to pursue his interest in painting. He enrolled at the Tōkyō Bijutsu Gakkō, the modern-day Tōkyō University of the Arts (東京藝術大学 Tōkyō Geijutsu Daigaku) or Geidai (芸大), which had just opened under the directorship of Okakura Kakuzō (岡倉覚三, 14 February 1863 - 2 September 1913).

There, he studied traditional painting under Yūki Masaaki (結城正明, 1840-1904) and the Kanō-style painter Hashimoto Gahō (橋本 雅邦, 21 August 1835 - 13 January 1908). Taikan was particularly inspired by Okakura's nationalist ideals and became his most devoted disciple. Okakura and Taikan remained associated throughout Yokoyama's life. In 1893, Taikan graduated with the painting "Village Children Watching an Old Monkey" (村童観猿翁 Sondō kan en-ō), a first example of the new style of painting. Village Children Watching an Old Monkey (村童観猿翁 Sondō kan en-ō)​
In 1895, Yokoyama became an assistant teacher at the Kyōto Municipal Fine Arts and Crafts School. He used his position to copy old paintings and, together with Hishida Shunsō (菱田春草, 21 September 1874 - 16 September 1911), visit monasteries in the Kyōto area. In 1896, he returned to Tōkyō and worked as an assistant professor at Tōkyō Bijutsu Gakkō but left his post the following year when Okakura was forced to resign as the result of an institutional dispute in 1898.

In the same year, the Japan Painting Association (日本絵画協会 Nihon kaiga kyōkai) was founded. At its first exhibition, Yokoyama received a prize for his painting "Selflessness" (無我 Muga, 1897) and two years later for "Listening to the Sermon" (聴講 Chōkō). Taikan participated in founding Okakura's private art school, the Nihon Bijutsuin (日本美術院, Japan Fine Arts Academy). Displayed at the academy's first exhibition, his painting "Qu Yuan" (1898) catapulted him to fame. It depicts the deposed Qu, a Chinese poet and politician in the State of Chu during the Warring States period, obviously alluding to Okakura's demise. Selflessness (無我 Muga 1897)​
Taikan, Shimomura Kanzan (下村観山, 10 April 1873 - 10 May 1930), and Shunsō helped Okakura to organise the Japan Fine Arts Academy, which faced multiple setbacks and had to close. However, Taikan was among those to re-establish it in 1914.

He and Shunsō developed a style that combined traditional painting with elements of European painting by transforming contours into blurred outlines. This style of painting, called mōrōtai (朦朧体, "hazy style"), was dismissed by the Japanese critics as being too close to Western impressionism.

Qu Yuan (1898)​
In 1903, Taikan and Shunsō travelled to India and visited the United States and Europe the following year, returning to Japan in 1905. In 1906, when the Japan Fine Arts Academy had to give up its location in Tōkyō, he, together with Shunsō, Shimomura Kanzan (下村観山, 10 April 1873 - 10 May 1930) and others, went to Izura in Ibaraki Prefecture, where Okakura owned property. There, the group continued to paint despite their poor economic situation. At the first state art exhibition organised by the Ministry of Culture in 1907, Taikan exhibited "Floating Lanterns" (流燈 Ryūtō; 1909), "Mountain Path" (山路 Yamaji; 1911) and his version of the "Eight Views of Xiāoxiāng" (1912), the thematic model for the Eight Views of Lake Biwa. After that, he occasionally acted as a juror for the exhibition; this was the period when his recognition began.

Floating Lanterns (流燈 Ryūtō), 1909​
When Okakura died in 1913, Taikan lost his position as a juror. Together with Shunsō and Kanzan, he re-established the Japan Fine Arts Academy, albeit only as an exhibition venue. He remained the driving force behind this institution until his death. In 1929, Taikan became a member of Salon France. In 1930, he travelled as a delegate to the Japanese Art Exhibition in Rome and participated in the exhibition of Japanese paintings in Berlin a year later. In 1931, he became an artist at the Imperial court (帝室芸妓院) and received the Asahi Prize two years later. In 1935, he became a member of the Academy of Arts, and in 1937 he was among the first to receive the newly endowed Order of Culture. He created the exhibition poster for the 1939 exhibition of Ancient Japanese Art in Berlin. He was also awarded the Order of the Rising Sun First Class.

In the 1930s, under the influence of Okakura, Yokoyama favoured a politically assertive Japan and thus the alliance with Japan's European allies, Italy and Germany. Mussolini was given a painting entitled "Hollyhock" (立葵 Tachi-aoi), and Hitler the picture "Fuji in the Dawn" (旭日霊峰 Asahi reihō). During the Pacific War and even after the war, he created many paintings depicting Mount Fuji as a symbol of imperishable Japan. During the war, he donated his earnings from the sales of his illustrations to the Imperial Army, which resulted in his interrogation and accusation as a suspected war criminal by GHQ. In the postwar period, both his art and popularity gradually declined.

On 26 February 1958, Yokoyama Taikan died in Tōkyō at the age of eighty-nine; curiously, his brain is preserved at the University of Tōkyō Medical School.

Taikan's residence near Shinobazu Pond in Ueno, the Yokoyama Taikan Memorial Hall (横山大観記念館), is open to the public, exhibiting some of his paintings and his library.


Yokoyama cannot be pinned down to a single style. He began under Hashimoto and Okakura, who inspired him to develop traditional Japanese painting further, which meant incorporating European styles with geometric perspective and shading. The choice of subject matter initially remained Japanese-Chinese-historical or limited to landscapes, and the format was the traditional hanging scroll. Over time, his style diversified, the subjects became more varied, and he created pictures of his living environment.

One of Taikan's early attempts to revolutionise Japanese-style painting involved emphasising flight and the deemphasis on lines, which resulted in softly blurred contours of figures and objects. However, critics and the public reacted negatively, and he later abandoned the style. This departure from the norm had already effected a break from the past, clearing the path for modern painters' ensuing innovations and experiments. Taikan later turned to monochrome ink painting, attracted by the unlimited tonal potential of black. An early masterpiece in this medium is his famous "Whirlpool of Life" (生々流転 Seisei ruten). One day on the Pacific Ocean (或る日の太平洋 Aruhi no Taiheiyō), 1952​


All images are in the public domain.
Reactions: Hiroto Uehara