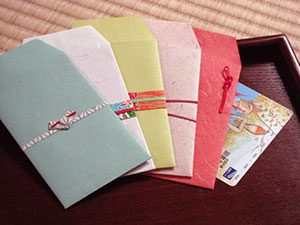 Shugibukuro (祝儀袋)
Most travel guides on Japan state that it is not customary to give tips. As gratuity is already included in bills and prices in the form of a 10 to 15 per cent service charge, many are not aware of the fact that they do pay tips. Therefore, the notion of “service = free of charge” is deeply ingrained in Japanese minds.

Bellboys, waiters, hairdressers, and even taxi drivers might raise their eyebrows at your tip and outright reject it. Nevertheless, some practices equivalent to tipping do exist in Japan.

Examples are chadai (茶代, tea money) or kokorozuke (心付け, lit. gratuity) in high-end Japanese restaurants and ryokan (旅館, traditional Japanese inns). Contrary to tipping in Western countries, chadai or kokorozuke is subject to certain formalities: the tip has to be “wrapped” in paper or enclosed in “tipping bags” called shugibukuro (祝儀袋). Handing out bills or coins without envelopes is considered to be entirely improper. Another aspect different from Western tipping is the timing: kokorozuke is given before receiving service, as it is part of the greeting or requesting ritual.

Less formal procedures of tipping pertain to taxi drivers: in their case, it is not required to wrap tips. The same rule applies to bus drivers and tour guides. However, often, tips are prepaid gratuity included in the overall travel fees.

Japan is, without a doubt world leader in “public toilet density”. Most public facilities in Japan are free of charge. Some municipalities, however, have recently started to ask users to leave tips at public toilets which are located in remote areas or at sightseeing spots to cover their expenditure on waste disposal.

Some people tip movers handing out “food money”. In hospitals, there is an unspoken habit of tipping doctors or nurses under the guise of kokorozuke, usually as a means of securing the services of a prominent surgeon. In recent years, the number of critical voices denouncing such practices as a blatant violation of professional ethics have been increasing. Therefore, many hospitals have resorted to clearly stating that they will not accept any gifts from patients or their families.

Giving out kokorozuke to public officials is considered bribery under Japanese law.

Let’s take a closer look at the two most likely situations where tipping might be called for: the ryokan (traditional Japanese inn) and moving companies.

Kokorozuke at the ryokan: necessary?

The answer is no. Since ryokan charges include service fees, there is no need for tipping. In case you ask for some special or unusual favour at a ryokan, better prepare a tipping bag.

Some examples of such requests are:

In general, you will give it to the employees working at the inn. The point here is to whom you should give so that you can get “most benefit”? If you want a nakai-san (仲居, serving lady) to do you demanding favour, then you will present kokorozuke to her. In a small ryokan, even if you request a favour of a nakai-san, and it is the master or the okami (女将, the madam of the ryokan) fulfilling your request, in the end, you will tip either. They might consider you a regular!

Usually, kokorozuke will be presented right before asking for a favour. When a nakai-san guides you to your room, and when she starts preparing tea for you, you start asking her a favour, giving out kokorozuke. In a small ryokan, when you ask the master or the okami a favour, hand over your shugibukuro stating:

The amount of kokorozuke depends on the number of people you are staying with, the room charge, and the kind of favour you are to ask, round figures like 1, 2, 3, or 5 are considered to be appropriate. It is often said that room charges and kokorozuke are proportional. However, it is quite rare for kokorozuke to exceed 10,000 yen unless you are part of a large group or stay in a top-notch ryokan. Two-thousand to 5,000 yen is the usual range of kokorozuke, with 3,000 yen the most common.

If you decide to tip movers, make sure you identify the foreman, and in front of all the movers, present him with a tip that is equivalent to 1,000 yen per person. That way, you can avoid the foreman pocketing the entire tip.