Travel The 100 Finest Castles of Japan

Article Gallery
Leave a rating
Do you fancy Japanese castles? If your answer is yes, you might be interested in what is all the rage among Japanese “castle lovers”: the Japan Top 100 Castles stamp rally!

Japan’s Top 100 Castles (日本百名城 Nihon hyaku-meijō) contains a list of the most famous castles across the board of Japan. The castles are numbered, organized by region, and their history briefly explained. Each castle has its own beautifully designed stamp; armed with the booklet, castle aficionados can now embark on their quest to collect all one hundred stamps. Once that’s accomplished, they can send it to the Japan Castle Foundation (日本城郭協会 Nihon Jōkaku Kyōkai), which will then certify their effort. Let’s take a look at the details (see the complete list of castles below):

How were those 100 castles chosen?

In 2006, the Japan Castle Foundation – prior to their 40th anniversary – picked 100 castles. Now the question is how have they narrowed it down to just one hundred? If not just castles, but forts were to be included too, things might have gone out of proportion: it is estimated that several tens of thousands of fortifications from the ancient to the modern era remain in Japan. Some say there are 25,000 castles registered in the official records, while others claim there are up to 40 to 50 thousand sites recorded in Japan!

The Japan Castle Foundation utilized the expertise of renowned historians and architects and selected historical sites based on the following criteria:
Finally, on the 6th of April, 2006, now designated “Castle Day”, the foundation officially certified the final contenders as “Japan’s Top 100 castles”. That date is of some significance, as the Japanese word for castle is shiro (城) which can be phonetically broken down into shi (“four”, for April, the fourth month in the year) and ro (“six”, the sixth day of the month).

The stamps are usually found in administrative buildings or next to the ticket counters of historical sites, but can sometimes difficult to locate.

See some of the stamp samples below. 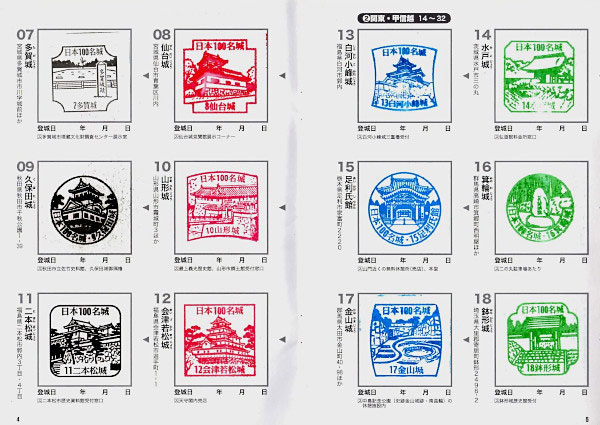 Interested in exploring some of Japan’s most magnificent edifices? Then get your stamp book first. There are a few different editions on sale, however, the one displayed above is quite handy while travelling. You can acquire it at Amazon Japan. Have fun! 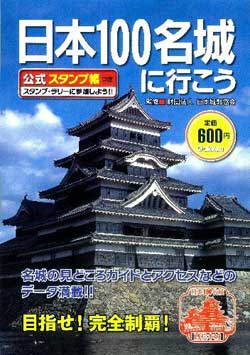