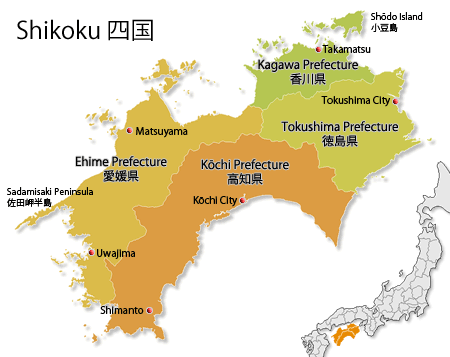 Map of Shikoku
Shikoku lies to the south of western Honshū across the Seto Inland Sea (瀬戸内海 Seto Naikai) and across the Bungo Channel (豊後水道 Bungo Suidō) from northeastern Kyūshū. It has a dissected topography with high mountains and steep slopes, which severely limit agriculture, habitation, and communication.

Northern Shikoku developed early, partly because the Inland Sea was the main traffic artery in ancient times, but southern Shikoku (Kōchi) developed later. Much of the island is a thinly populated agricultural region with few natural resources and little large-scale industry. Arable land in basins, valleys, and along the coast allows the production of rice, vegetables, and citrus fruit; extensive livestock raising and coastal fishing are also carried out. Shikoku is easily reached by aeroplane, with domestic flights regularly landing at Takamatsu, Kochi, Tokushima and Matsuyama. Trains from Honshū run from Okayama, and there are plenty of road entry points over Seto-Ōhashi near Okayama/Takamatsu, Kurushima-Kaikyō Ōhashi (来島海峡大橋) near Onomichi and Imabari, and the Akashi-Kaikyō Ōhashi (明石海峡大橋) near Tokushima/Kobe. If travelling within Japan, you will either fly direct to one of the local airports, or take a train through Okayama, or come by road on one of the three bridges. Otherwise, there are regular bus and ferry connections to the metropolitan areas of Ōsaka and Kobe. The climate is subtropical with short mild winters and long hot summers. Northern Shikoku has an “Inland Sea-type” climate with many fair days, and southern Shikoku has an “Omote Nihon-type” (the Pacific coast) climate with heavy rainfall in summer and frequent typhoons. Sunshine hours are high and consistent throughout the year, so taking one of the many pilgrimage routes can be pleasant at almost any time, rainfall excepted. Rainfall is virtually non-existent during the spring and winter but picks up slowly as the weather warms and typhoons start to come through. From June to September, rainfall can be very high in typhoons and you should take care if hiking near rivers. Rainfall drops off rapidly through September, and autumn is one of the best times to see Shikoku at its most beautiful.

Shikoku is best known for pilgrimages, but also famous for its arts and crafts. Lacquerware, washi (Japanese paper), paper fans and umbrellas, geta, pottery, cloth and bamboo work, each part of the island has its own distinctive speciality. In Kagawa, look out for lacquerware of all sizes, paper fans and waxed umbrellas, Takamatsu geta (wooden shoes), and Masahiwara for pottery. Tokushima has Otani-yaki, massive pottery items that take two potters to make and can be up to a metre or more across. Awa indigo dye from this region is unique and highly prized. Ehime, home of the mikan (Japanese satsuma type orange), has Tobe-yaki, made in Tobe city for over 400 years. The simple designs in blue on white are distinctive and highly collectable. Take-zaiku has been making bamboo whisks, ladles, and all sorts of items for over a thousand years. Kōchi is famous for paper and kites (taki) made from this. Flown at festivals and to celebrate auspicious occasions, Kōchi kites are colourful and come in all sorts of shapes and sizes. Shikoku is regarded as fairly rural and hard to get to by most Japanese, in many ways a backwater where you will not find much of the neon signs of Tōkyō or the crowds of Ōsaka. However, while the former may be true in some parts, the latter is not the case. One of the most unspoiled and natural areas of Japan left, there are plenty of opportunities to find the Japan of yesterday in the rolling green hills of Shikoku. Famous as a pilgrimage destination, the island is dotted with Buddhist temples and lined with pilgrimage routes which also make ideal walking for hikers and travellers.

Shikoku is the scene of one of the most renowned pilgrimages in Japan, the 88-temple pilgrimage. Pilgrims retrace the route of Kūkai (空海, 774-835), also known as Kōbō-Daishi (弘法大師), a saint who was born in Shikoku and who helped to integrate Buddhism into Japanese life. By following Kūkai”s path, pilgrims honour a cultural icon. Those who hope to do penance for a grave sin or error complete the pilgrimage in reverse order, as it is believed that they will encounter the saint on their journey or in their dreams. In Shingon Buddhism, eighty-eight represents the number of evils that can beset us. It is estimated that around 100,000 pilgrims complete the circuit each year, while countless others follow parts of it.

Numerous hot springs (onsen) dot the route for a relaxing soak after a hard day’s walking. There are also plenty of interesting sights on the routes: obviously the hundreds of temples and shrines that punctuate the pilgrimages, but also castles (four of which predate both World War II and the Meiji Restoration that caused the destruction of so many ancient Japanese buildings) and gardens (see the famous Ritsurin Garden in Kagawa Prefecture). For the best experiences, make the most of the surf and sea in the summer and come and go by boat from the main island if you have time – avoid the shinkansen for a minute and take a leisurely cruise to Honshū or Kyushū from Matsuyama, Takamatsu or one of the many other small ports along the coast.

Shikoku is best known for its pilgrimage routes, and it is well worth trying at least a part of one route and seeing some of the 88 sacred temples (and many other temples) that are dotted all over this green island. The route is about 1500 kilometres long, so it may take some time. Unless you just do a bit of it, of course.