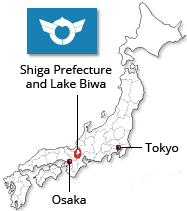 Shiga Prefecture (滋賀県)
Shiga Prefecture (滋賀県) is part of the Kansai Region and borders the prefectures of Fukui, Gifu, Mie and Kyōto. Shiga is one of the eight landlocked prefectures of Japan and takes a basin surrounded by mountains on all sides. Lake Biwa (琵琶湖 Biwa-ko), in central Shiga, is the largest lake in Japan. The climate is moderate, with heavy snowfall in the northern half.

Known as Ōmi Province (近江国 Ōmi no kuni) or Gōshū (江州) after the Taika Reform (645/46), the area was crucial from early on. The city of Ōtsu (大津市), the modern capital of Shiga Prefecture, served briefly as the imperial capital in the seventh century. Various warlords, such as the Hōjō, Azai, and the Ishida clans, gained dominance through the feudal period. Its proximity to the capital of Kyōto made it the site of several major battles in Japanese history.

In the late sixteenth century, Oda Nobunaga, the national unifier, established his base at Azuchi Castle near the eastern shore of Lake Biwa. The magnificent edifice was destroyed shortly after Nobunaga’s death in 1582. After Ishida Mitsunari (石田三成, 1559-1600), the daimyō of Ōmi and opponent of Tokugawa Ieyasu in the Battle of Sekigahara, was defeated, Ieyasu bestowed the area onto some of his closest retainers, the most prominent of which was the Ii clan, who established Hikone Castle close to the ruins of Sawayama Castle (佐和山城 Sawayama-jō).

The merchants of Ōmi were noted for their entrepreneurial skills during the Edo period (1600-1868). Shiga was an important commercial centre, with numerous stations along the Tōkaidō and the Nakasendo roads connecting Edo and Kyōto. After the Meiji Restoration Ōmi was split up into eight prefectures which were merged into Shiga Prefecture in 1872. The region of Reinan (嶺南) was incorporated into Fukui Prefecture in 1881.

While neighbouring Kyōto seems to put the region around Lake Biwa in the shade, Shiga Prefecture offers an array of exciting destinations to tourists. Travellers from Tōkyō will most likely arrive at JR Maibara Sta. (米原駅) on the Tōkaidō Shinkansen (about 2 hours and minutes, 12,260 JPY), while there are plenty of options for travellers from Ōsaka (about 40 minutes on the Tokaido-Sanyo Line, 950 JPY) and Kyōto (11 minutes, 190 JPY) will arrive at the southern town of Ōtsu (大津市). Nagahama Castle was built in 1575-76 by Toyotomi Hideyoshi in the village then called Kunitomo... Hikonyan (), the mascot of Hikone City