A samurai with a vision

A pro-imperial activist in the Bakumatsu Period who helped forge the alliance between Satsuma and Chōshū that would eventually topple the Tokugawa shogunate. 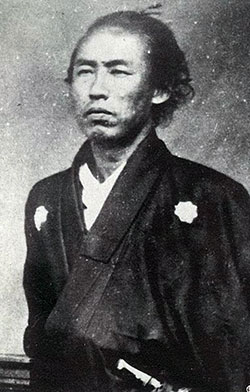 Sakamoto Ryōma (坂本龍馬, 1836-1867) was born to a rural samurai (郷士 gōshi or 郷侍 gōzamurai) family in the castle town of Kōchi in the Tosa Domain (modern-day Kōchi Prefecture in Shikoku). Gōshi occupied the lowest samurai ranks. Sakamoto’s family, who had not been granted the status until 1771, were merchants, brewers, and peasants. He, therefore, had little formal education, but he showed an early understanding of Japan's political crisis in the 1850s. As Sakamoto displayed an early fondness for swordsmanship, his family sent him to Edo (present-day Tōkyō), where he witnessed the arrival of Commodore Matthew Perry’s black ships in 1853. He participated in the frantic preparations Perry’s fleet had triggered hostilities with the foreigners. His zeal brought him to the attention of Takechi Zuizan (武市瑞山, 1829-1865), the Tosa elder who had been charged with Ryōma’s training in swordsmanship.

The Ansei Purge instigated by the shogunal regent Ii Naosuke in 1858 brought Sakamoto and his friends right back into the tumults of national politics, imperial loyalism, and extremism. Ii Naosuke had signed the Harris Treaty with the United States against the emperor’s wish and punished the daimyō of Tosa and other rebellious domains for having attempted to interfere in the shogunal succession in favour of Tokugawa Yoshinobu. The young Tosa hotspurs construed the actions of the Tokugawa leaders to be defiant of the imperial will, hostile towards the ideals of samurai loyalties and subservient to aggressive foreign powers. In 1860, Ii Naosuke was assassinated by seventeen samurai from Mito, assisted by a retainer from Satsuma. In 1861, Takechi enrolled Sakamoto and other young followers in his Tosa Loyalist Party, whose members expressed their indignation at the imperial grief over humiliation by the “barbarians” and their sense of injustice at the punishment of their lord. But before the loyalists gained influence in Tosa with the assassination of the domain’s chief minister Yoshida Tōyō (吉田東洋, 1816-1862) in 1862, Sakamoto had fled the domain and became a masterless samurai (rōnin).

Sakamoto’s first plan was to assassinate Katsu Kaishū, a shogunal official and modernizer, as an alleged advocate of surrender to foreigners. Katsu, however, persuaded Sakamoto of the necessity of a long-term programme to rebuild Japan’s strength. Before long, Sakamoto became Katsu’s assistant to recruit other young men of spirit as students for the Kobe Naval Academy. Katsu was also associated with a group of officials and daimyō who perceived the shogunate’s need for greater participation by sectors traditionally unrepresented in Tokugawa decision-making, and as a result, Sakamoto encountered ideas of power-sharing associated with the movement for the union of court and shogunate (公武合体 kōbu gattai), which dominated national politics after 1862.

In 1864, political setbacks, such as loyalist supporters being driven out of Kyōto and the foreign punitive actions against the Satsuma and Chōshū domains, resulted in stricter and less conciliatory policies of the Tokugawa shogunate. The reformer Katsu was dismissed as naval commissioner, and Sakamoto went to Satsuma, which was beginning to emerge as the centre of the anti-Tokugawa cause. In 1865, Satsuma leaders helped Sakamoto organise a small fleet of armed merchant ships in Nagasaki, the Kaientai (海援隊, lit. “Maritime Support Group”). With their help, he was able to supply beleaguered Chōshū with grain and weapons, and in March 1866, he was an agent in the Satsuma-Chōshū Alliance. This political pact guaranteed Chōshū’s survival in the ensuing hostilities with the Tokugawa armies.

Chōshū’s victory in the summer war of 1866 and the impending Tokugawa collapse made Sakamoto’s politics and contacts increasingly interested his former superiors in Tosa. He was welcomed back in good standing as a Tosa retainer, chiefly through the efforts of Gotō Shōjirō (後藤象二郎, 1838-1897), now the leading Tosa official. Tosa authorities were anxious to scupper the plans of Satsuma and Chōshū to overthrow the shogunate by force with a negotiated settlement of their own that would allow for increased daimyō participation instead of a new monopoly of power by a rival domain.

Sakamoto used the experience he had gathered while working for Katsu to devise a settlement that became the basis of the proposal for the resignation of Tokugawa Yoshinobu. His plan envisioned a new conciliar structure in which “able daimyō” and court nobles would staff an upper council and “able men,” a lower； treaties with foreign countries would be renegotiated, and new and more uniform codes of administration and laws would be compiled by international conventions. Yoshinobu accepted this proposal, but it failed to gain national support. Satsuma and Chōshū continued on their collision course with the shogunate. They were responsible for a court demand that the Tokugawa family head surrenders his lands and titles, sparking the resistance that justified the total conquest of the Tokugawa domains.

Sakamoto himself continued to work for a new political future in Japan. A posthumous document usually attributed to him advocates government by consensus, denounces the injustices of the hereditary class rule, and pleads for reforms from above, aiming at a political equilibrium between the twin evils of the “incompetent highborn” and the “stupid and shortsighted commoners.” It argues that retainers should select their leaders, and a series of peer elections should serve to choose wise and qualified leadership. Before his pamphlet was completed and before the Tokugawa were outmanoeuvred, however, Sakamoto and his friend Nakaoka Shintarō (中岡慎太郎, 1838-1867) were murdered at the Ōmiya (近江屋) Inn in Kyōto on his birthday on 10 December 1867, by members of the Mimawarigumi, one of the rōnin units the shogunate had organized to help it maintain public order.

Not associated with later Meiji-era powers and cut off at the height of his “buoyant enthusiasm and optimism,” Sakamoto rose to the ranks of a national hero for many causes: as Kaientai head to enthusiasts of naval power; as an advocate of councils to believers in representative government; as heir to a merchant tradition and founder of a primitive merchant fleet to business entrepreneurs.

In 2003, Kōchi Airport was renamed Kōchi Ryōma Airport in his honour, and his life was not only popularised in countless manga and movies but also in the 2010 NHK Taiga drama Ryoma-den (龍馬伝) aired between January 3 and November 28, 2010. 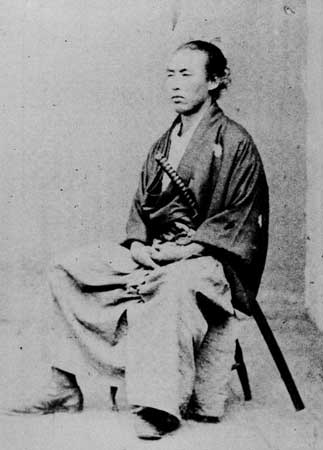 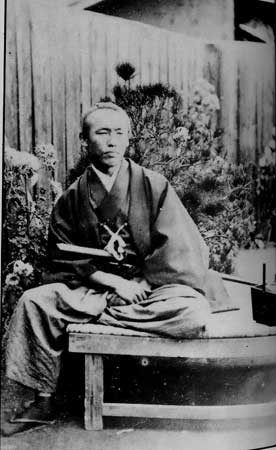 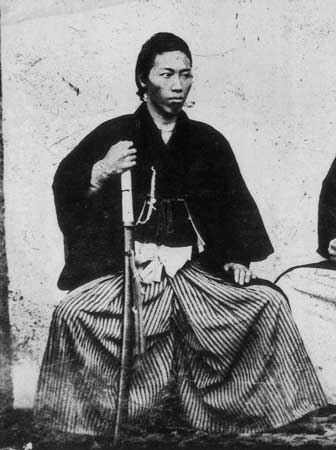 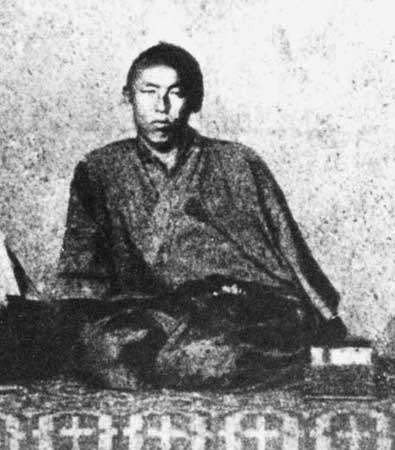 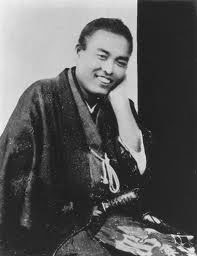 Next article in the series 'Historical Biographies': Mori Motonari