Article Gallery
Leave a rating
Noh (能 nō) or nōgaku (能楽) is an abridgment of sarugaku no nō, an aristocratic form of sung and danced performance developed from kagura (神楽, “god-entertainment”) plays, a type of Shinto theatrical dance, sarugaku (猿楽, lit. “monkey music”), a form of theatre popular in Japan during the 11th to 14th centuries, and folk dances, like dengaku (田楽), by Kan’ami Kiyotsugu (観阿弥 清次, 1333-1384) and his son Zeami Motokiyo (世阿弥 元清, 1363-1443), on the order of Shogun Ashikaga Yoshimitsu. Nō uses masks derived from gigaku (伎楽).

This theatrical genre involves two types of plays: those dealing with reality, and those based on the supernatural; both include syncretic Buddhism and Shinto beliefs. The texts, always very poetic and in a language that is often difficult to understand, are either yōkyoku (謡曲, recited) or utai (謡, chanted), accompanied by drums and flutes supported by a spoken chorus.

Nō plays are performed on a raised stage called a butai (舞台), each side about 6 meters in length, with a traditional Shintō roof supported by five pillars and linked to the dressing room (on the upstage left of the stage) by an open corridor (橋懸り, hashigakari) decorated with three potted pines. The back of the stage has a simple set composed of a curtain, usually depicting pine branches.

The orchestra, located upstage, comprises four musicians (囃子, (hayashi), playing the flute (笛 fue), two drums (大鼓 ōtsuzumi, a hip drum, and 小鼓 kotsuzumi, a shoulder drum) and a larger drum (太鼓 taiko). The chorus (地謡, jiutai) is on the right. The backstage area (鏡の間, kagami no ma, “mirror room”) is generally in a small separate building, linked to the stage by the hashigakari. 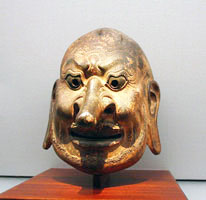 Gigaku is an ancient pantomime dance, using masks (伎楽面 gigakumen), most likely introduced from Korea during the Nara Period around 612. Gigaku-danced dramas are of a religious nature. Most are “farces” somewhat analogous to mediaeval Passion plays.
The little that’s known comes from masks and a short musical treatise by the title of Kyōkunshō (教訓抄) written in the 13th century by Koma Chikazane (狛近真, 1177-1242), and a twelfth-century scroll (絵巻物 emakimono) named Shinzei Nyûdô kogaku zu (信西入道古楽図, “Shinzei Nyûdô ancient music drawings”), devoted to the Nara Period.

The music that accompanied gigaku dances was played by an instrumental ensemble including flutes, tsuzumi drums and cymbals. The shishimai (獅子舞, lion dance), still performed during certain religious ceremonies, could be a surviving remnant of gigaku dances.

Actors move onstage via a small, three-step staircase at the front. This arrangement dates back only to the eighteenth century. Older nō performances took place on more or less symmetrical stages. The stage, open on three sides, is surrounded by a band of stones about one metre wide. The audience is seated beyond that space.

The actors, always sumptuously costumed, are all men. The cast generally includes shite (仕手, lead actor) and a tsure (連れ or 仕手連れ shitetsure, assistant actor), who sometimes wears masks (能面 nōmen or 面 omote), and other unmasked actors (脇, waki, counterpart or foil of the shite). Depending on the play, the waki vary in number, but there are in general only one or two (waki and 子方 kokata). The plays themselves are often in two acts, the mae (前場 first) and the nochi (後場 ending), separated by an interlude called ai (アイ). The texts, on which the plays are based, are usually short, in prose (言葉 kotoba) or verse (utai), and have few musical indications except for drumbeats and no directions. The yōkyoku are not high literature, but serve to illustrate the actors’ gestures and dances, to confer a theatrical significance upon them. The aesthetic importance of the performance resides in the music (序 jo, introduction; 破 ha, exposition; 急 kyū, finale, lit. “beginning, break, rapid”) and in the actors’ dancing.

Usually, the waki enters first, pausing on the hashigakari to sing a sort of introduction (次第, shidai) to the play, accompanied by the chorus. He then slowly proceeds to the pillar (仕手柱, shitehashira) located at the exit from the corridor, declaiming (名乗り nanori) his names and the reason for his presence. He goes on to sing a recitative (道行 michiyuki) situating the locale and the era of the action that will follow and sits down. The shite enters to sing a first song (一セイ issei), followed by a recitative. (サシ sashi) and by songs (sageuta), 上歌 ageuta) in which he gives his name and his function in the play, as well as the place where the action takes place, supported by the chorus.

The second part of the play consists of a dialogue (問答 mondō) between the shite and the waki, intended to specify through question and answer the reason for the action, with responses repeated by the chorus (初同 shodō). The waki then asks the shite who he is, and the shite answers by dancing (クセ kuse), with the chorus supplying the words. Then the shite exits by the hashigakari, while the kyōgen actors (狂言, comedians) come on stage to explain in plain language the subject of the play (aikyōgen). They then retire while the waki intones a “waiting song” (待謡 machiutai). The shite reappears in different costumes and masks and dances another kuse describing the action (called iguse when he remains immobile on the stage during this time). He then dances rapidly (ワカ waka), withdraws to the pillar stamping on the ground indicating the end of the act and leaves for the kagami no ma very slowly, like a ghost fading away.


Noh masks 伎楽
Nō masks, called omote (lit. “face”) are very important props that are symbolic of nō as a masked drama. In documents surviving from the Azuchi-Momoyama period (安土桃山時代 azuchi-momoyama jidai, 1573-1603) period, about 60 types of masks are listed, and these account for most of the masks in use even today. Most but not all shite roles require the use of a mask, but in principle, the roles of kokata (child actors) and actual living men are performed without a mask. This performance style is called hitamen (直面, lit. “plain face”), and the actor performs without expression, as though his face has become his mask. Within established limits, there are specific masks used for each type of character. The actor performing the shite role chooses the most appropriate mask based upon his idea of the subject matter and his plan for the performance.

The masks are sculpted in a way in which the real and the abstract are ingeniously joined to produce beauty of form, and great effort has been exerted to make them conform to the actual performance. Depending upon the movements of the actor, they can cause various moods to be expressed upon the stage. Text and photos courtesy of the Japan Arts Council

A nō performance usually consists of three to five acts (plays with different subjects), separated by comical interludes (狂言 kyōgen) designed to relieve the audience’s tension. A performance can last several hours. Although nō has evolved since its beginning, it has little – in contrast to kabuki – in common with the Western conception of theatre. It is foremost intended to provide a purely aesthetic experience through the costumes, the dance, the music and the codified gestures of the actors. There are few or no props: sometimes a light bamboo gondola symbolizes a boat, a house or a chariot. Each actor (shite or waki) has a folding fan (中啓 chūkei) used only to indicate the beginning of a dance or a chorus or to convey, by its position or how far it is open a particular object or sentiment. The chūkei is commonly painted gold on one side, silver on the other, and bears drawings related to the subject of the play. The other actors and choristers have regular folding fans called ōgi (扇), displaying the mon （紋, insignia, crest) of the school to which they belong.

Currently, there are five main schools of nō:
There are also specialised schools for the secondary roles (waki), including Shimogakari (下掛り), Takayasu (高安) and Fukuō (福王). The Tokyo University of Fine Arts and Music holds courses in nō. The most popular school is the Kanze, which claims about one million practitioners, most of them amateurs. Performances, mainly in Kyoto, Nagoya, and Tokyo, are attended for the most part by nō fans and drama students but is considered good form to go and “suffer through” a nō play at least once in one’s life. Nō seems to be preserved as a tradition only, which should be observed dutifully. Early 20th century classic author Kyusaku Yumeno's debut novella, "The Spirit Drum" was about a hand drum used in Noh theater, and the work has several references to Noh theater. I would recommend this work as a supplemental resource to understand Noh theater, since Kyusaku Yumeno himself was a major proponent of it.