Article Gallery
Leave a rating
Nagoya (名古屋市), Japan’s fourth-largest city, is the capital of Aichi Prefecture, located in central Honshū on Ise Bay, as well as the political, financial, and cultural centre of the Chubu Region, halfway between Tōkyō and Ōsaka.

Located on the fertile Nōbi Plain, the region was early settled. Several kofun (mounded tombs) is located in the south-central section of modern-day Nagoya, such as the Shiratoriryō, said to be the tomb of the mythical Prince Yamatotakeru (日本武尊), whose sword Kusanagi is still kept at Atsuta Shrine in Nagoya. The town prospered around the shrine. In the sixteenth century, it became the military base of the Imagawa clan (今川氏), who built a castle, which was later taken over by Oda Nobunaga.

With the unification of Japan by Tokugawa Ieyasu and the construction of Nagoya Castle in 1609-14, the city became the stronghold of the Owari domain, one of the three successor houses (御三家 gosanke) of the Tokugawa dynasty. Nagoya thrived under the patronage of successive daimyō as a cultural centre and continued its essential role until modern times. The city suffered extensive destruction during World War II.

Nagoya is a modern metropolis with wide boulevards and thirty satellite cities within a forty-kilometre radius. It has turned into an economic and industrial powerhouse after the war. The principal industries are automotive (Lexus, Mitsubishi Motors R&D) and automotive suppliers, transportation, chemicals, steel, robot industries, and ceramic ware. Nagoya has traditionally been known for its enamelware (七宝 shippō, cloisonné). Nagoya is also the seat of JR Central, the famous porcelain manufacturer Noritake, and various domestic and international enterprises.


Three major train lines serve Nagoya, and their stations are close together in the city's centre. The JR main station is where the shinkansen and all other regular JR services arrive. The Meitetsu terminal for trains to and from Inuyama and Gifu is situated south of the JR station, while the Kintetsu terminal for trains to Nara and the Shima Peninsula is just adjacent to Meitetsu. The highway bus terminals are located north of the JR station and at the Oasis 21 terminal in Sakae.

International and domestic air travellers arrive at the Central Japan International Airport (中部国際空港 Chūbu Kokusai Kūkō, also known as Centrair) situated on a reclaimed island thirty kilometres south of Nagoya. The airport is popular with tourists, offering a large variety of restaurants and a large airport bath that allows you to watch landings and take-offs while soaking in hot water. The Meitetsu Airport Line (名鉄空港線) connects Centrair with the city (28 minutes, 1,200 JPY on the μSKY [μ pronounced myū] rapid limited expresses, 850 JPY on slower services).


In addition to trains run by JR Central, Meitetsu and Kintetsu Lines connecting Nagoya with other cities and regions, there is an efficient public transportation network consisting of public buses and six subway lines.

The Me-guru (メーグル) Sightseeing Route Bus runs from Tuesday to Sunday and loops around the major tourist attractions of Nagoya. The ticket is 500 JPY for adults (250 JPY for children). 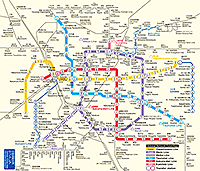 Tokugawa Art Museum in Nagoya: the treasures of the Owari branch of the Tokugawa family. Shike-michi (四間道) is a small historical street in Nishi-ku, Nagoya.

Next article in the series 'Nagoya Travel Guide': Nagoya Castle