Kon’nō Hachimangū (金王八幡宮) is a Shinto shrine just a stone's throw from Shibuya Station. Founded in 1092 by the Shibuya clan who gave their name to the modern-day Tokyo ward, it was built right inside of what once was Shibuya Castle.


In 1051, Kawasaki Motoie (河崎基家), a descendant of the Chichibu clan, had been awarded the territory of Yamori-no-Sho (谷盛庄, located in Musashi Province and corresponding to present-day Shibuya Ward) honouring his support for Minamoto Yoshiie, the governor of Mutsu Province, against branches of the Kiyohara clan in the Gosannen War (1083-1089). Yoshiie was convinced that Motoie's prayers to Hachiman, a god of war, had contributed to his victory. Legend has it that Motoie's son, Kawasaki Shigeie (河崎重家), was granted the family name 'Shibuya' by Emperor Horikawa (r. 1087-1107) after defending the imperial palace in Kyōto against intruders. Subsequently, the Shibuya settled in the area of the Hachimangū and erected a castle there. The castle burned down in 1524 when the area was attacked by forces of Hōjō Ujitsuna. Haiden (拝殿), the worship hall of the shrine. The current shrine was built by Aoyama Tadatoshi (青山忠俊), a Tokugawa vassal, and Lady Kasuga (春日局 Kasuga no Tsubone) in 1612, encompassing the principles of gongen-zukuri (権現造), an architectural style of Shintō shrines in which the haiden and the honden (本殿, the main hall holding the enshrined deity) are connected under the same roof, forming an H-like structure. 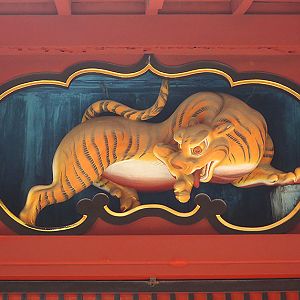 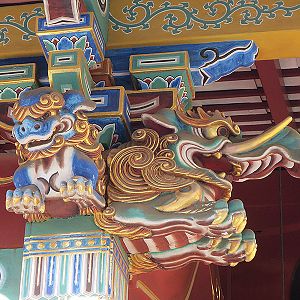 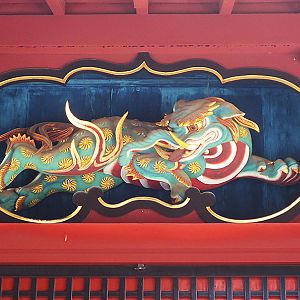 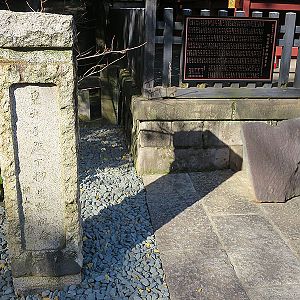 Details of the haiden; the last image shows a wall stone that is said to come from the historical Shibuya Castle. 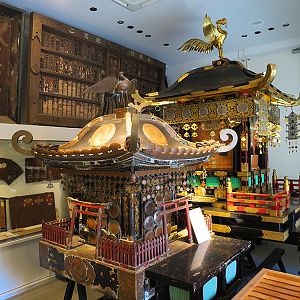 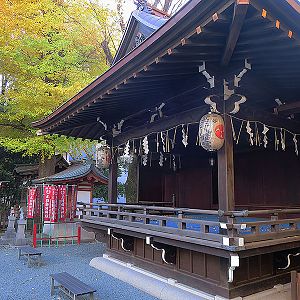 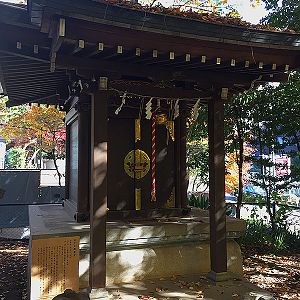 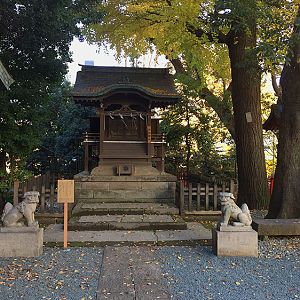 Left: The shrine of Shibuya Kon’nōmaru Tsunemitsu (1141-1185), a member of the Shibuya clan who is worshipped as a deity. A statue depicting Kon’nōmaru and allegedly carved by himself is preserved in the shrine and on display during the annual festival in late March; right: Mitake-jinja enshrines Kushimachi-no-Mikoto (真知命), Ōnamuchi-no-mikoto (大己貴命, 大穴持命), Sukunabikona-no-Mikoto (少彦名少彦名), and Yamatotakeru-no-Mikoto (ヤマトタケル命), all kami (deities) of prosperous business, worshipped in particular by the trade and service industry. Yamatotakeru-no-Mikoto is also known as a kami of martial arts.