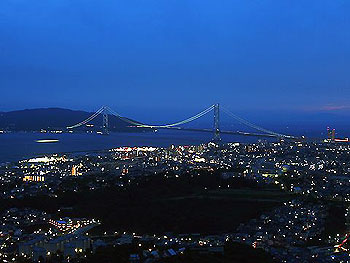 View of Kobe and Akashi-Kaikyō Bridge
The term Kansai (関西, lit. "west of the barrier" was first used in the tenth century in contradistinction to the word Kantō. Kantō (関東, lit. "east of the barrier") referred to the area east of the barrier station (関所 sekisho) at Ōsaka (in modern-day Shiga Prefecture, not to be confused with the principal city of the same name). Hence Kansai referred to the area west of that station. From the Kamakura Period (1185-1333), the dividing line between the Kantō and the Kansai was marked by the three barrier stations at Suzuka (present-day Mie Prefecture), Fuwa (Gifu Prefecture), and Arachi (Fukui Prefecture). It was later fixed further east at the barrier station at Hakone (Kanagawa Prefecture). The term is also used to describe local speech patterns (as in Kansai-ben, 関西弁 or 關西辯, or kansai–namari 関西訛り), and manners and customs, and thus closely resemble kamigata (上方), another term used to cover the Kyōto-Ōsaka area.

It was the imperial centre of Japan until the end of the Tokugawa shogunate with the Meiji Restoration in 1868 when the imperial residence was moved to Tōkyō. The most popular destinations in this region are Nara's former imperial capital cities of Nara (capital from 710 to 794) and Kyōto (capital from 794 to 1868). However, Kobe, Osaka, Himeji and Hikoneare significant destinations in their own right. The central hub and international airport is the new airport built on a human-made island in Ōsaka Bay. Still, Nagoya Airport in the neighbouring Chubu Region may also be a suitable international entry point if you are studying or travelling in Shiga or Mie Prefectures.

If you are interested in learning the Kansai dialect, then any of the cities in this region would provide a good base – almost all Japanese living in this area use the Kansai dialect in their daily life. Costs vary considerably depending on location. As with any urban site, the large cities of Osaka and Kobe are both very congested, and you will find that housing and transport costs will be higher than other cities in the region. In return, you get a more cosmopolitan environment, better nightlife and cultural entertainment and better transport connections to other parts of the area and Japan.

Kyōto, in particular, has several study destinations of good quality. It has long been a city of learning and a significant destination for Japanese students. There are also high-quality providers of niche programs in smaller centres such as Hikone. Transport connections to the rest of Japan are excellent, although the price of the Shinkansen can make transport to Tokyo prohibitive. Suppose you wanted to travel through both east and west Japan. In that case, a more central location such as the Chubu region might be better; if you are interested in a cosmopolitan and lively study environment and travel to the west of Japan and Shikoku, the Kansai region would be an ideal base. 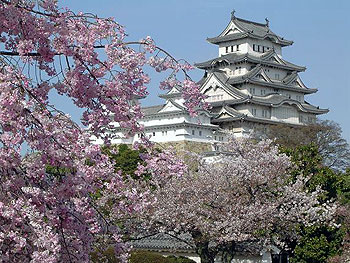 Himeji Castle (姫路城)
Kansai Airport (KIX) is the leading international airport in the region, serving Ōsaka and Kansai. There are other local airports and also Ōsaka International Airport (Itami), but Kansai Airport will probably be your central access point to the region from abroad. Nagoya is also located nearby and is just one hour from Kyoto. Ōsaka and Kyōto are significant hubs for train travel, and you can easily reach many parts of the country from either location.

You can get flights to Yao, Nanki Shirahama and Tajima airports from within Japan, although most flights will be to Ōsaka Itami or Kansai International. Trains and buses also connect the major cities in the region and the main Tokaido/Sanyo Shinkansen and motorway routes to the north and the south of Japan.

Temperatures do not change significantly from the Kantō and Chubu regions, which means hot, sweaty summers and cool winters. Autumn and spring are the best times to visit, as ever, and also the time to see many of the famous sites around the area at their best (particularly Kyoto and Nara). Winter temperatures drop to as low as five degrees Centigrade, but in the summer rise to the low thirties and average nearly thirty degrees Centigrade. Sunshine remains relatively steady throughout the year, but rainfall varies considerably. From May through to September, typhoon rainfall is high, but as ever, usually concentrated. 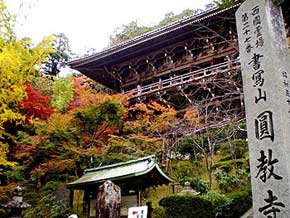 Shoshazan Engyō-ji in Himeji
Hyōgo is an old industrial area of Japan and is famous for many products. Seventy per cent of all soroban (Japanese abacus) production is in Hyōgo, and 90% of Japanese willow ware (nearly one million items each year). Hyōgo also makes most of Japan's incense. It is also well-known for soba and produces almost half of that consumed in Japan. Sake production approaches 200,000 litres/year – hopefully, consumption is a little lower. Along with this tradition, Hyōgo is also home to high technology.

The Arima hot springs in the Kobe-Hanshin district are one of the oldest in Japan, and they and the Kinosaki and Yumura hot springs (Tajima District) are popular. Skiing is possible in the Tajima area (Kannabe and Hachibuse) and the northern part of Nishi-Harima. Swimming and yachting can be found on the Japan Sea coast, the Seto Inland Sea, and the Pacific Ocean coast. Popular festivals include the Nada Fighting Festival (Himeji), and the Shunsetsusai (Chinese New Year) Festival. In the Tanba District, the Tanba Tachikui Pottery has been making pottery for over 800 years, and more than 100,000 people visit the Tanba Dekansho Festival every year.

Himeji Castle in the Kobe-Hanshin district is a must-see world heritage site, and the Engyoji Temple is an Important Cultural Asset. Higashi-Harima District is located precisely at the centre of the Japanese archipelago with plenty of Jomon-era burial mounds. Awaji Island in the far south of Hyōgo has the world's longest suspension bridge (Akashi Kaikyo Bridge). 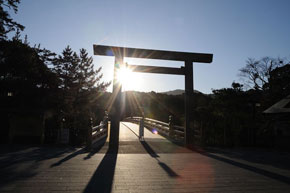 Ise Grand Shrine (伊勢神宮), Mie Prefecture
Ise Shrine located on the banks of the Isuzu river is thought to be over two thousand years old. It is Japan's most important Shinto shrine. The inner shrine is dedicated to Amaterasu, the sun-goddess supposed to be the ancestor of the Japanese Imperial Family, and should be on any itinerary. Do not forget to try Akafuku rice cakes at the shrine (traditional pilgrim's fare). Ise is also famous for udon (thick noodles). Ise-Shima for some reason has many aquariums, including two at Toba, and one each at Futami and Ago. The pearl industry in the Toba area is very famous and produces some of the most sought-after pearls in the world. See also the sunset over the wedded rocks in Futami.

Iga is famous as the origin of the ninja spy and the birthplace of Matsuo Basho, the most famous of all haiku poets. Most of the mountainous areas have been designated national parks. See the Basho Museum and the Ninja Museum in Ueno, which also has a castle. Akame (near Nabari City) has some of the most picturesque waterfalls and forests in Japan. The northern part of Mie has some excellent hot springs (Yunoyama Onsen in Komono, ideal after walking around on Mount Gozaisho-Dake) and the reasonably well-known Banko Pottery in Yokkaichi. Senju-ji Temple in Tsu is the largest temple in the prefecture.

The prefecture combines mountainous and coastal areas, so try to get into the Ise-Shima and Yoshino-Kumano national parks and the quasi-national park Suzuka in the area. 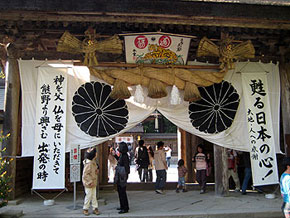 Kumano Hongū Taisha, Tanabe
Wakayama is most well known for its onsen (hot springs). One of these, Ryujin Spa, is said to be one of the most effective in Japan for making women more beautiful. Shirahama Spa is one of the leading resorts in the area and the most well-known spa in Wakayama. Tsubaki Spa is claimed to be excellent for rheumatism and arthritis, and Yunomine Spa is one of the oldest in Japan.

Nara, along with Kyoto, is a must on most itineraries that cover traditional Japan. Formerly the imperial capital of Japan (from 710 to 794, when it was moved to Kyoto), Nara contains eight world heritage sites (Todai-ji, Kofuku-ji, Kasuga-Taisha, Kasugayama Primeval Forest, Gango-ji, Yakushi-ji, Toshodai-ji and Nara Palace Site). The area houses the oldest and some of the most important temples and shrines in the country. 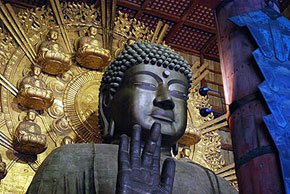 The Daibutsu in the Tōdai-ji
Ancient burial mounds (kofun) are the tombs of ancient nobles and emperors. Little is known about who is interred in each, but different legends exist. The main ones are Ishibutai Burial Mound in Asuka (seventh century CE), Takamatsuzuka Burial Mound (vividly coloured paintings inside), Fujinoki Burial Mound (the sixth century, many artefacts found), and Hashihaka Burial Mound (third century CE).

Asuka had dozens of enormous ancient burial mounds and sites of ancient palaces and was the centre of Japan in the sixth to the seventh century CE. The period is famous for its pottery and power struggles between vying families. See Okadera Temple, Asukadera Temple (the oldest daibutsu or Great Buddha in Japan at Ango-in Monastery), Kashihara Jingu Shrine and the Prefectural Museum.

Hase and Muro have the temples Hasedera and Muroji. Hasedera has the second-largest main hall in Japan and is the home of the standing Eleven-Faced Kannon figure, the most massive wooden Buddhist statue in Japan. In spring, the peonies in the gardens all bloom together and bring Hasedera much of its fame. Muroji Temple has the smallest outdoor pagoda in Japan and is also in a fantastic setting (best in spring or autumn). 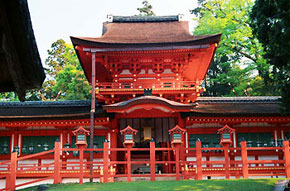 Kasuga Taisha, Nara
Mount Yoshino is said to have over 60,000 sakura (Japanese cherry trees) and is an incredible sight in spring when they are all in bloom. Because of the varying types and height of the mountain, different trees bloom at different times, meaning that you can find enough for hanami for a full month. See Nyoirinji Temple, Kinpusenji Temple (the honden or main hall is the joint-second largest wooden structure in Japan), Yoshimizu Shrine and the Chikurin-in Temple.

Ōsaka has long been a famous city in Japan and the centre of trade and enterprise for centuries. With the establishment of Edo (Tokyo) by the Tokugawa shogunate, a long rivalry between the two cities began. Ōsaka is the most populous city in Japan after Tokyo and a centre of culture. The local dialect (Kansai-ben) is widely used, although you will find that almost all people speak standard Japanese (if they have to).

Ōsaka Castle is a must on any visit to the city and is one of Japan's largest and most fabulous in Japan. In Izumiotsu City and Izumi City, see the Ikegamisone Historic Ruins, which date from the Yayoi period. The Nintoku Mausoleum in Sakai City, at nearly 500 metres long, is the largest burial mound of its type in the world. It is thought to date from the fifth century CE. The Museum of Oriental Ceramics has one of the world's top collections of Chinese and Korean ceramics in the world. Above all, though, Ōsaka is a bustling city, and the nightlife is second to none.

Ōsaka has long been regarded as the kitchen of Japan. Some of the most famous items to come from Ōsaka and now found all around Japan include takoyaki (たこ焼き or 蛸焼), octopus in batter cooked into a ball; and kitsune-udon (狐うどん), thick noodles (饂飩, or merely うどん udon) with fried tofu among many other things. The city has also been a centre of culture for centuries, and the tea ceremony has its roots in Ōsaka. Comedy duos or manzai (漫才) are a standard feature of Ōsaka comedy and have become the standard around the country. Ōsaka is also an essential centre for rakugo (comic storytelling) and kabuki.