Register Log in
Article Gallery Discussion
Leave a rating
Kanda Shrine (神田神社 Kanda-jinja), officially known as Kanda Myōjin (神田明神), is located in Chiyoda Ward, Tōkyō, and ranks among the oldest shrines in the Kantō region. It was the main tutelary shrine of Edo venerated by the edokko (江戸っ子), the inhabitants of Edo whose families go back several generations, and by the shōgun's family alike. Kanda Shrine was founded in 730 in the vicinity of Shibasaki, a fishing village in Musashi Province, close to present-day Ōtemachi in Tōkyō's Chiyoda Ward. The founder is said to be Makanda Omi (真神田臣), a descendant of a hereditary clan of priests from Izumo called jingi shizoku (神祇士族). They claim to go back to Ōkuninushi no Mikoto, one of the three foremost kami mentioned in the Kojiki and head of the kunitsukami (国津神), the deities of the earthly realm. Ōkuninushi no Mikoto, also known as Ōnamuchi no Mikoto, is the first deity enshrined at Kanda Myōjin.

Besides Ōkuninushi, Kanda-jinja also enshrines Sukunahikuna no Mikoto who helped Ōkuninushi form the land of Japan. Both kami are identified with the Seven Gods of Fortune (七福神 shichifukujin) and are revered as Daikoku and Ebisu respectively. Daikoku originated in India and was introduced to Japan as Daikokuten by the Buddhist Tendai sect, while Ebisu, a native Japanese deity associated with fishing and an abundant catch, is considered Daikoku's son. The third kami enshrined at Kanda-jinja is the spirit of Tairo Masakado who organised a local rebellion in eastern Japan that eventually turned against the Heian Court; his insurgence, however, ended in defeat. Masakado's severed head was displayed in Kyōto but - according to legend - flew back to the east and ended up in Shibasaki, the fishing village where the original Kanda Shrine had been located. There, his angry spirit caused a lot of misfortune until, in 1309, a visiting monk named Shinkyō Shōnin (真教上人) restored Masakado's mound and erected a Buddhist stele at the adjacent Nichirin-ji temple to console the spirit. Masakado was later enshrined at Kanda Shrine.

Emperor Meiji was hesitant to include Kanda Myōjin in the group of the Tōkyō-jissha (東京十社), the Ten Shrines of Tōkyō, as Masakado's spirit was seen as a symbol of resistance against the imperial system. In 1874, he ordered that the kami be removed from the shrine. However, upon public pressure the spirit of the popular rebel was re-enshrined at the Kanda Myōjin in 1984. In 1590, Tokugawa Ieyasu was transferred to Kantō and made Edo the seat of his government. When Edo Castle was expanded, the shrine was moved to its present location in 1616. Rumour has it that Ieyasu had Masakado's shrine relocated because he felt uneasy about living so close to the vengeful spirit.

In the course of the centuries, the shrine was destroyed and rebuilt a couple of times, in particular after the Great Meireki Fire of 1657 and the Great Kantō Earthquake in 1923. In 1934, Kanda-jinja was the first shrine in Japan to receive a ferroconcrete structure which is the reason it survived the Tōkyō firebombing of 9 March 1945. The three architects involved in the reconstruction of Kanda Shinre were Itō Chūta (伊東忠太, 1867-1954), Ōe Shintarō (大江新太郎, 1879-1935), and Satō Kōichi (佐藤晃一, 1878-1954). Itō was was one of the leading Japanese architects of the early 20th century and in Meiji received his education in both Western and Japanese architecture. He designed many Western-style buildings but also advocated a Japanese style called nihon shumi (日本趣味, 'Japanese taste') that historicized elements of Japanese temples, shrines or castles. Some of Itō's grand designs are Meiji Jingū, Heian Jingū, as well as the Yūshūkan and Shinmon of Yasukuni Shrine. And while the architects of Kanda Shrine employed the latest building techniques and materials, great care was given to create the impression of a wooden structure. Although reconstructed with modern technology, Kanda Shrine preserved the original appearance of an Edo-era shrine. At the street entrance, visitors pass a myōjin torii made of copper. The two-storied Zuishimon (隨神門) at the entrance to the shrine ground was constructed in 1995 to replace the original gate which was destroyed in the Great Kantō Earthquake. It is made of Japanese cypress and is mainly coloured in red sporting paintings of the four shishin (dragon, tiger, phoenix, and turtle) guarding the four directions. The roof is made of copper tiles, just like the haiden, the main building. The gate also features the symbols associated with Taira Masakado, the butterfly and the tethered horse. The Zuishimon is a rōmon (楼門), a tower gate with two zuijin (随神, shrine guards) in its outer bays clothed in court dress and holding bows and arrows. 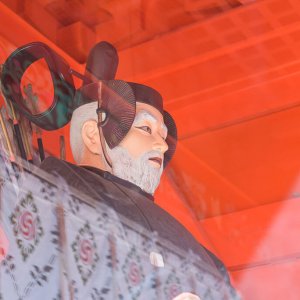 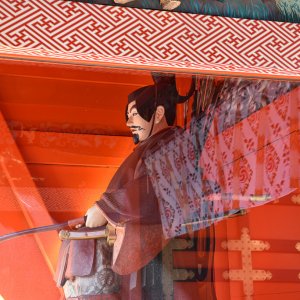 ​
The main structure of the shrine, the haiden (拝殿, worship hall) and the honden (本殿, sanctuary), just like the Zuishimon have a irimoya, a hip-and-gable roof typical of the gongen-zukuri style. It is painted in vermillion with golden accents. The floor of the haiden is made of concrete, so visitors do not need to take off their shoes when they enter the worship hall. The shrine has a three-storied museum exhibiting a selection of its precious woodblock prints and other objects. The copper torii at the entrance of Kanda Shrine. Kanda Shrine is quite close to Akihabara, so it has become a centre of attraction for fans of hi-tech and popular Japanese culture.

Kanda Matsuri is one of the three most important Shintō festivals in Tōkyō (the other two are the Sannō Matsuri at Hie Shrine and the Fukagawa Matsuri at Tomioka Hachiman-gū in Kōtō Ward). Its tradition started after the Battle of Sekigahara (1600) as Tenka Matsuri on the occasion of Ieyasu's victory, when 200 Mikoshi (portable shrines) were paraded into Edo Castle so that the shōgun could watch the festivities. Nowadays, the festival takes place on 15 May in odd-numbered years, alternating with the Sannō Matsuri. The second festival of Kanda Myōjin is Daikoku Matsuri, a three-day festival held in January.