The Honden (本殿), the main hall of Jindai-ji​
Jindai-ji is one of the oldest Buddhist temples in the area of modern-day Tōkyō. According to legend, it was founded in 733, making it the second-oldest temple after Sensō-ji temple in Asakusa. Its name can be traced back to Jinja Daiō (深沙大王), a guardian deity in esoteric Buddhism (密教 Mikkyō) and one of the sixteen good gods (善神 zenshin) mentioned in the Mahaprajnaparamita Sutra (大般若波羅蜜多経 Daihan'nyaharamittakyō). The stairs leading up to Sanmon Gate (山門)​
Temple tradition has it that the daughter of Sato Osaukon (郷長右近) fell in love with a local man named Fukuman (福満); her mother, however, opposed their marriage. When Fukuman prayed to Jinja Daiō, she finally gave in. Her daughter founded the temple in Tempyō 5 (733 CE) to worship and show her gratitude to Jinja Daiō. In the Jōgan era (859-877 CE), the Jindai-ji joined the Tendai school of Buddhism. The main object of worship is a statue of Amida Buddha. Sanmon Gate​
The temple complex is surrounded by a semi-circular hill to the northeast. Visitors climb a staircase to the temple and enter through the temple gate (山門 Sanmon). The original gate burned down in 1646 and was replaced with a yakuimon (薬医門), a gate with a gabled roof typical for the Edo period. Passing through the gate, visitors will see the temple bell (鐘楼 shōrō) to the right and the main hall (本堂 hondō) in front of them. The main hall was lost in a conflagration in 1865 and was reconstructed in the Taishō period. In 2003, the gate was re-roofed, using tiled copper sheets instead of regular roof tiles. Ganzandaishido (元三大師堂)​
To the left of the main hall, set back a little, is the Gansandaishidō (元三大師堂), popular in the Edo period (1603-1868) among worshippers to pray for good luck. In 1900, a Shaka triad with a seated Shaka Buddha and two companions made of bronze and gold leaf (金銅釈迦如来椅像 Kongō Shaka Nyorai Izō) was discovered under the hall. The triad was later displayed in a new building, the Shakadō (釈迦堂). The Three Hakuhō Buddhas (白鳳三仏 Hakuhō Sanbutsu) were initially registered as an Important Cultural Property of Japan and later granted the status of a National Treasure. The Main Hall (本堂 hondō)​
To the right of the main hall are the monks' quarters with the abbot's residence and the guest house named Suzume no oyado (雀のお宿, "Accommodation for Sparrows"). Behind the main hall, on the sloping hill of the temple grounds is the small Kaisandō (開山堂) dedicated to the founder of the temple. Further up the hill to the west lies the cemetery. The interior of the Main Hall Leaving the temple through a side exit next to the Shakadō, one reaches the hall of Jinja Daiō (深沙大王堂) a little further up, where he is worshipped within the framework of esoteric Buddhism. The slab on the right relates to Ryōgen (良源, 912-985), a venerated monk of the Tendai school and the 18th abbot of the famous Enryaku Temple on Mount Hiei in Ōtsu. He is credited with reviving both the Tendai school and the Enryaku-ji and was later regarded as a protector from all sorts of evil. Legend has it that one day Ryōgen carried out a ritual to drive away a spirit that had caused an epidemic. So intense were his efforts that his body became emaciated and turned into a yaksha (夜叉), a class of mischievous nature-spirits. A variation of the same legend claims that Ryōgen injected the spirit into his body to release it once the epidemic had subsided. While meditating in front of a mirror, his reflection turned into a bony demon with horns. His pupil Myōbu who witnessed his transformation drew an image of the demon. To this day, Tendai temples sell paper amulets depicting Ryōgen as Tsuno Daishi (角大師) the Great Horned Teacher. These amulets are attached to front doors to ward off evils. 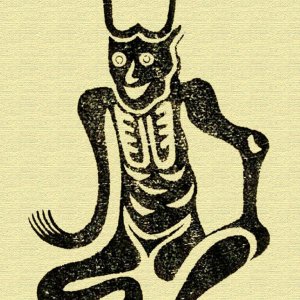