Article Gallery (1)
Leave a rating
Mount Iimori (飯盛山 Iimoriyama) is located east of Aizuwakamatsu JR Station in the town of Aizuwakamatsu in western Fukushima. In 1868, it was the location of a mass suicide of a Byakkotai unit consisting of twenty teenagers, all sons of Aizu samurai fighting against the invading pro-imperial forces of the Satsuma-Chōshū Alliance. It houses the graves of this and other Byakkotai units, the Byakkotai Museum as well as the Sazaedo, a hexagonal pagoda with a spiralling ramp that allows you to ascend and descend inside the wooden structure. The graves of the nineteen Byakkotai members who committed suicide upon seeing what they...
You approach the hill from the Aizu bus station and pass, as is common in Japanese tourist resorts, a road flanked by souvenir shops. The Byakkotai Museum (open from 08:00 to 17:00, 09:00 to 16:00 from December to March, admission: 400 JPY, 300 JPY for high school students, 200 JPY for children, group discount available) is at the foot of the hill. You can climb the mountain using a small road leading up on the left side of the museum, climb the stairs or take the escalator next to the stairway. The graves of the nineteen Byakkotai members who comitted suicide at Mount Iimori. One of the...
Once on top, there is a small shrine dedicated to the Byakkotai, as well as a long and narrow tunnel the boys used to access Iimoriyama on their escape after the Battle of Tonoguchihara. Further up the hill, you can spot Sazaedo and a rest house, while the location of the graves is a short walk further up the hill. The graves of the nineteen Byakkotai members of the second shichū unit, who committed suicide on the very same spot, are located on top of the hill, next to a forum-like open space holding memorial plates and other monuments devoted to the Byakkotai. In 1928, Benito Mussolini dedicated a pillar recovered from Pompeii in the name of the citizens of Rome. Hasso von Etzdorf, a German diplomat, expressed his admiration for the “spirit of the young knights of Aizu” by donating a German-language memorial plaque. Both monuments are still in place, although the swastika on the German memorial has been replaced by an Iron Cross. This commemorative plaque had been donated by the German diplomat Hasso von Etzdorff in 1935...
More Byakkotai graves are located on the southern side of the hill, one of them being the tomb of Iinuma Sadakichi (飯沼貞吉, 1854-1931), the only survivor of the boy squad. Tsuruga Castle, 2.8 kilometres to the southeast, is barely visible in the distance. Statue of a Byakkotai member spotting Aizuwakamatsu Castle (Tsurugajo) in the distance. 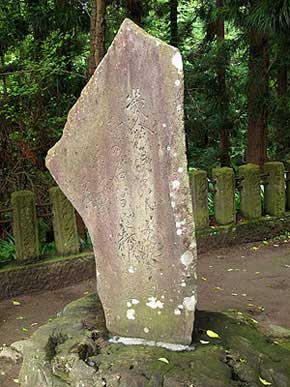 Memorial stele with a poem written by Matsudaira Katamori:

“No matter how many people wash the stones with their
tears, these names will never vanish from the world.”

You can quickly reach Mount Iimori by Aizu City Bus (A5 or H36 station, “Iimoriyama-shita”). Please refer to our Aizuwakamatsu page for more information on transportation.

Next article in series The Matsudaira Family Graves