Ii Naosuke (井伊直弼, 1815-1860) was the fourteenth daimyō of the Hikone Domain (modern-day Shiga Prefecture) and as tairō (大老, “regent”) of the Tokugawa shogunate the de-facto ruler of Japan for almost two years (1858-60). During his short rule, Ii attempted to stem the erosion of Tokugawa hegemony in Japan but failed to implement any vigorous policies that could have protected the shogunate against Western influence and internal dissension.

Naosuke was the fourteenth son of the retired daimyō Naonaka and born in Hikone. With so many elder brothers, his chances of ever occupying a crucial political function in the domain looked bleak. He lived on a modest stipend, studying waka (和歌) poetry, tea ceremony, painting, Buddhism, as well as military and civilian matters. During his studies, he met Nagano Shuzen (長野主膳, 1815-1862), a scholar who would become Naosuke’s confidant, retainer, and close adviser. By 1846, it became apparent that Ii Naooki (1796-1850), Naosuke’s older brother and the thirteenth daimyō of Hikone would have no children of his own. As all the elder brothers had already passed away, Naosuke was designated Naoki's heir and succeeded him in 1850.

In the first three years of his rule, Naosuke focused on issues relating to his domain, but the arrival of Commodore Perry’s ships in 1853 diverted his attention from purely domestic to national affairs: the Hikone daimyō traditionally held the title of tairō (大老), a politically irrelevant position bestowed by the shogunate in times of difficulty. Several of Naosuke’s ancestors had held the title for short periods in the past. His position regarding foreign powers was that defiance would be futile and suicidal and that a treaty had, therefore, to be granted. In the course of the negotiations and the signing of the Kanagawa Treaty in 1854, Naosuke clashed severely with Tokugawa Nariaki of the Mito Domain. Their animosities later turned into bitter enmity.

Around 1857/58, two new political issues emerged: the selection of a new shōgun, as Tokugawa Iesada (徳川家定, 1824-1858) was ill and heirless, and the negotiation of a commercial treaty with Townsend Harris, the American consul in Japan. Finding a new shōgun satisfactory to all political parties was of utmost national importance, to decide the fate of the Tokugawa regime. Tokugawa Nariaki of the Mito Domain, Matsudaira Yoshinaga (松平慶永, 1828-1890) of the Echizen Domain (modern-day Fukui Prefecture), and Shimazu Nariakira (島津斉彬, 1809-1858) of the Satsuma Domain attempted to seize control by having Nairaki’s son Tokugawa Yoshinobu designated heir to Iesada. Their disrespect for the procedures and principles of shogunal succession and governance perturbed many shogunal leaders, who, encouraged by Ii, supported a rival candidate, Tokugawa Iemochi, the young daimyō of Wakayama and grandson of the former shōgun Ienari (徳川家斉, 1773-1841). On June 4, 1858, after Hotta Masayoshi (堀田 正睦, 1810-1864), the chief senior councillor (老中 rōjū) of the shogunate, failed to secure the imperial approval for both the draft treaty as well as Iemochi’s designation, shogunal officials and members of the shogunal household arranged for Naosuke’s appointment as tairō.

The new tairō was quick to secure his position by removing uncooperative officials and issuing clear warnings to all others to obey his instructions. He was still hoping to garner the support of the other daimyō, secure the imperial approval for the treaty with Harris, as well as have Iemochi designated heir to Iesada. However, the American consul-general was mostly unaware of the intricacies of Japanese politics and exerted immense pressure onto the shogunate to sign the treaty as fast as possible, threatening the bakufu with the prospect of a British fleet that would soon arrive to pressure the shogunate into a less favourable settlement. Reports of naval activity persuaded Naosuke of the necessity to sign the treaty even without imperial approval on July 29, 1858.

Within just six days of signing the Harris, treaty Iemochi was designated to become the new shōgun. Naosuke’s unsanctioned actions caused an unprecedented wave of opposition from powerful daimyō, samurai, and the imperial court. He responded to what he viewed as a severe threat to the political order by taking rigorous steps to discipline Nariaki, whom he and Nagano Shunzen regarded as the figureheads of the opposition. Yoshinobu, Yoshinaga, Nariakira, and a few other daimyō (Date Munenari from the Uwajima Domain and Yamanouchi Toyoshige from the Tosa Domain) were punished, along with countless advisers, court members, and activist samurai (such as Yoshida Shōin, who was decapitated in November 1859). This ruthless repression came later to be known as the Ansei Purge (安政の大獄 Ansei no taigoku), and eventually led to Naosuke’s assassination.

By autumn 1859, the purge had led to an uneasy calm, and Naosuke tried to gradually reconcile the opposing forces by arranging a marriage between the new shōgun Iemochi and Princess Kazu (和宮 親子内親王 Kazu-no-Miya Chikako naishinnō, 1846-1877), a sister of Emperor Kōmei. The principle of kōbu gattai (公武合体, “Union of the Imperial Court and the Shogunate”) was conceived by Nagano Shunzen, Naosuke’s liaison to the imperial court in Kyōto, and was aimed at improving the falling prestige of the shogunate. The court eventually approved of this idea, and the marriage ceremony was held in February 1862, two years after Naosuke’s assassination.

While Ii took all administrative steps necessary to implement the commercial treaties with foreign nations, establishing new trade and port authorities and dispatching a Japanese mission to the United States on the ‘Kanrin Maru” (commanded by Katsu Kaishū) to ratify the Harris Treaty, he failed to be aware of the implications of those new foreign relationships. His opening of Japan did not entail any essential policies of military and political reform.

His measures of domestic reconciliation were foiled continuously by the shogunate’s troubled relationship with the Mito Domain. Naosuke’s conviction that the source of his difficulties lay in Nariaki’s unswerving opposition led him to pursue a policy of relentless harshness towards Mito, punishing not only Nariaki but also many of his retainers. As a result, the factional tensions prevalent in Mito for over two decades reached unprecedented heights in the late 1850s. In the wake of Nariaki’s confinement in 1858, a significant number of Mito retainers started to agitate against Ii and the shogunate. Naosuke responded by increasing the pressure on the domain and averted an open rebellion by threatening to send military forces against the domain. Seventeen retainers from Mito, assisted by Arimura Jisaemon (有村次左衛門), a samurai from Satsuma, resolved the crisis by intercepting Ii Naosuke’s entourage on the snowy morning of March 24, 1860, on his way to Edo Castle and killing him. This assassination entered the annals of history as the Sakuradamon Incident (桜田門外の変 Sakuradamongai no hen).

After Ii’s death, Andō Nobumasa (安藤信正, 1819-1871) assumed leadership of the shogunate in cooperation with Kuze Hirochika (久世広周, 1819-1864), pursuing Naosuke’s policy of reconciliation with Mito and other opposing forces. However, Andō lacked Ii’s resolve and determination, further weakening the shogunate’s hegemony, partially strengthened under Ii’s rule. Tensions in Mito would continue for years to come, culminating in the Mito Rebellion of 1864. 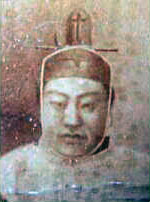 Anonymous Japanese painting depicting the Sakuradamon Incident in which Ii Naosuke was killed... "Arimura Jisaemon" by 1860 Japanese artist. One of the insurgents who killed Ii Naosuke in the...

Next article in series Sugawara no Michizane