This article is in the series Ibaraki Travel Guide

Article Gallery
Leave a rating
Ibaraki Prefecture (茨城県 Ibaraki-ken) is located in central Honshū and bounded by Fukushima Prefecture to the north, the Pacific Ocean to the east, and Tochigi and Saitama prefectures to the west. The northern part is occupied by mountains of the Abukuma (阿武隈山地) and Yamizo (八溝山地) mountain ranges, and the larger southern section is an extension of the Kantō Plain. The prefecture contains several large lakes and lagoons. The climate is relatively mild. 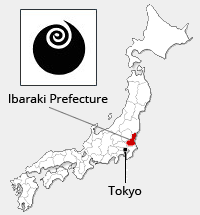 The modern-day prefecture was known as Hitachi Province (常陸国 Hitachi no Kuni) under the ancient provincial system (国軍 kokugun). The city of Mito (水戸) was the seat of an important branch of the Tokugawa family in the Edo Period (1600-1868) and became a centre of scholarship. The present prefectural name and boundaries were established in 1875 after the Meiji Restoration.

Statue of Tokugawa Mitsukuni in Kairakuen

The relative abundance of level land and proximity to Tōkyō helped make Ibaraki a leading agricultural prefecture. Rice, grains, and a wide variety of fruits and vegetables are produced in significant quantities. Fishing and mining used to play a significant role, too. More importantly, Ibaraki’s proximity to the Tōkyō-Yokohama industrial area has led to the development of electrical equipment, food processing, steel, petrochemical, (nuclear) energy, and precision machining industries. The world-famous company Hitachi Ltd. was founded in the city by the same name (日立市 Hitachi-shi).

The Kashima Coastal Industrial Region (鹿島臨海工業地帯 Kashima Kōgyō Chiiki), as well as the Tsukuba Academic New Town, are large-scale projects that were launched in the 1960s and 70s. Tsukuba is now known as “Tsukuba Science City” (筑波研究学園都市 Tsukuba Kenkyū Gakuen Toshi) and is home to two universities, sixty national research facilities, and 240 private research facilities. In 2005, Tsukuba Station was connected to Akihabara Station in Tōkyō by the Tsukuba Express (TX), which covers the 58.3 kilometres between the two cities in forty-five minutes. The first full-scale winery in Japan, Chateau Kamiya, was built in 1903 by Denbei Kamiya

The capital Mito is famous for the Kairaku-en, one of Japan’s most famous gardens. Ibaraki features lakes, lagoons, sandy beaches, as well as one of Japan’s larger waterfalls, the Fukuroda Falls (袋田の滝 Fukurodanotaki), close to the hot spring resort of Fukuroda. The Great Buddha in Ushiku