Article Gallery
Leave a rating
The history of Kyoto (京都) starts as early as the eighth century CE when the city became the capital of Japan and home to the imperial court from 794 to 1868. Today, it is the capital of Kyoto Prefecture. Rich in historical sites, relics and monuments, the city attracts more than 30 million visitors every year.

Although archaeological sites dating from the Jōmon (10,000 to 300 BCE) and Yayoi (300 BCE to 300 CE) periods have been found in and around Kyōto, the Kyōto fault basin was first settled in the sixth century by the Hata clan (秦氏), immigrants from Korea. Members of the clan were skilled in silkworm culture and silk weaving and amassed great wealth through their trade in silk products. In 603 Kōryū-ji (広隆寺), the family temple of the Hata was constructed at Uzamasa in the western part of the basin. The temple is therefore sometimes referred to as Uzumasa-dera (太秦寺) or Hatanokimi-dera (秦公寺). The northern part was also developed early on as the residence of such powerful families as the Kamo, Izumo, and the Ono.

However, it was not until 794 that Kyōto or Heiankyō (平安京), as it was then called, became the capital. The plan of the new city, like that of Heijōkyō (平城京) in Nara, was patterned after the Tang (T’ang) dynasty (618-907) capital of Chang’an (Ch’ang-an, modern-day Xi’an). Its rectangular shape measured four and a half kilometres east to west and 5.2 kilometres north to south. Kyōto gradually expanded eastward across the Kamo River (鴨川 Kamo-gawa), and the Heian residences of the influential Fujiwara and Taira clans were constructed in Shirakawa and Rokuhara in central Kyōto.

During the Kamakura Period (1185-1333), the city was temporarily eclipsed as the centre of national power, when Minamoto no Yoritomo (源 頼朝, 1147-1199) gained political ascendancy and established a shogunate in Kamakura. In the Muromachi Period (1333-1568), a shogunate was established for the first time in Kyōto, and again the city became the centre of the political power. It was during this period that many significant temples were built, such as Tenryū-ji (天龍寺), Nanzen-ji (南禅寺), Kinkaku-ji (金閣寺), and Ginkakuji (銀閣寺). The construction of new temples in Kyōto had long been prohibited within the boundaries of Heiankyō due to what was considered an undue influence of religious institutions in Nara. Only after the spread of Buddhist sects in the Kamakura Period did the building of temples in Kyōto increase. A large part of the city was destroyed during the Ōnin War (応仁の乱 Ōnin no Ran, 1467–1477), marking the end of the Muromachi Period.

After almost hundred years of civil war, Toyotomi Hideyoshi (豊臣秀吉, 1536/37-1598) succeeded in unifying the country. In 1590, he embarked on an ambitious building programme which included the lavishly decorated Jurakutei (聚楽第) palace and Fushimi Castle (伏見城 Fushimi-jō) along Yodo River (淀川).

During the Edo period (1600-1868), the Tokugawa shogunate was firmly established in Edo (present-day Tōkyō), and the political focus of the country once again shifted away from Kyōto. However, the Rokuhara Tandai (六波羅探題), who had been stationed in Kyōto as shogunal representatives since the transfer of political authority to Kamakura, continued to be appointed. In 1603, the shogunate completed Nijō Castle (二条城 Nijō-jō) to serve as a temporary residence to the shogun. In the peaceful years of the Edo Period, Kyōto prospered as a centre of arts, commerce, and religion. Local crafts such as nishijin-ori (西陣織, brocade), yūzen-zome, a resist-dyeing technique, pottery, lacquerware, doll making, and fan making. Quite a few merchants of the dry-goods dealers guild (株仲間 kabunakama) lent money to daimyō or the shogunate.

Kyōto was very much affected by the transfer of the capital to Tōkyō after the Meiji Restoration in 1868. In order to compensate for this blow, the city launched a rapid program of modernization: in 1890, the Lake Biwa Canal (琵琶湖疎水 Biwako Sosui) was completed; the first hydroelectric plant of Japan was constructed at Keage in the northeastern section of the city, and in 1895 the first streetcars in Japan began operation in Kyōto. 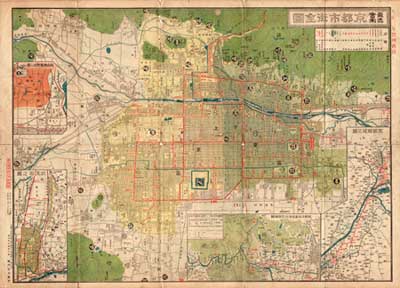 The city was slow in developing modern industries, as it lacks a harbour and surrounding open land, but has become a part of the Hanshin Industrial Zone (阪神工業地帯 Hanshin Kōgyō Chitai), and home to numerous electric, machinery, and chemical plants. Its traditional industries continue to flourish to some extent. Fushimi is known for its outstanding sake. The city is an educational centre, hosting thirty-seven universities and private institutes of higher learning, including Kyoto University, the Kyoto Institute of Technology, Doshisha University, and Ritsumeikan University.

Kyōto has over fifty museums, the most famous of which is the Kyoto National Museum, established in 1889 and one of the three formerly imperially-mandated art museums in Japan. The Kyoto International Conference Center was established in 1966, the new Kyoto Station Building, opened in 1997 and designed by artist Hiroshi Hara, marked the 1200th anniversary of the capital’s foundation in Kyōto.