Register Log in
Article Gallery Discussion
Leave a rating
Gokoku-ji Temple (護国寺), formally known as Shinreisan Shitchi-in Gokoku-ji (神鈴山悉地院護国寺) is a Buddhist temple of the Shingon school located in the Bunkyō Ward of Tōkyō. It belongs to the Shingi (新義) branch of Shingon Buddhism. 
Tokugawa Tsunayoshi (徳川綱吉, 1646-1709), the fifth Tokugawa shōgun, had the temple built in 1681 at the request of the head priest Ryōken (亮賢僧正 1611-1687). Ryōken revered Tsunayoshi's mother Keishō-in (桂昌院 1627-1705) and convinced the shōgun to allot the bakufu's herb garden, the Ōtsuka yakuen (大塚薬園), for that purpose. Nowadays, the temple buildings are still held in the style of the Genroku period (元禄, 1688-1704), but most of the temple structures burnt down in 1883 and 1926. Following the last conflagration, some old buildings were relocated here from other areas. During the Second World War, the temple was miraculously spared from bomb damage. The road leading to the temple, which used to be lined with shops on both sides, has been preserved, too. 
Visitors enter the temple through the Niō Gate (仁王門 Niō-mon), named after the two temple guards (Niō). Next, at the top of a staircase, is the Middle Gate (中門 Chūmon), here called the "Gate of Immortality" (不老門 Furō-mon), built in 1938. It is an exact replica of the main gate of the Kurama-dera (鞍馬寺) in Kyōto. Another gate, the Sō-mon (惣門), leads to the abbot's residence. The gate was modelled on entrances customary in daimyō residences and was reserved for high-ranking guests. Hondō (本堂)​
The main hall (本堂 Hondō) was constructed in 1697 and is designated as an Important Cultural Property of Japan (重要文化財 Jūyō Bunkazai). It was initially Kannon Hall (観音堂 Kannon-dō) and was moved here after the fire in 1928 when the old main hall was lost to the flames. Kannon is also the principal object of worship. The hall presents a mixture of Japanese and Zen styles. It has a simple gabled roof and is covered with copper sheeting. To the left of the main hall is the Moonlight Residence (月光殿 Gekkō-den), another designated Important Cultural Property. It dates from the early Azuchi-Momoyama period and is roofed with left-aligned tiles. Initially, it was a guest house on the grounds of Mii-dera in Shiga Prefecture, and was relocated to Tōkyō in 1888 and finally placed at Gokoku-ji in 1928.

Yakushi Hall was originally the hall for storing a complete set of sutras. It dates from the Genroku period and is thus an important cultural heritage site. The stairs leading up to Chūmon. ​ 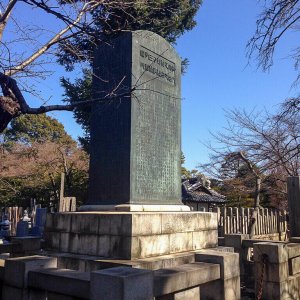 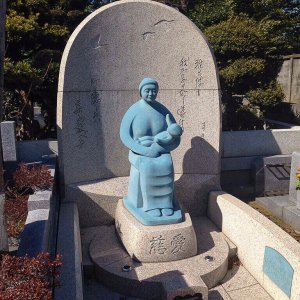 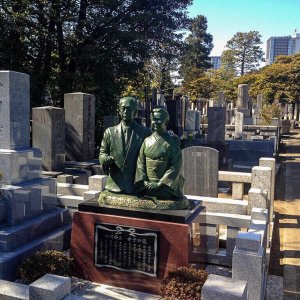 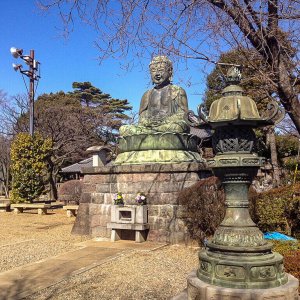 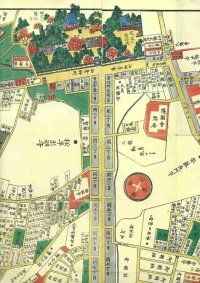