Article Gallery
Leave a rating
Genrō (元老, lit. the original elders”) was the unofficial designation given to the “founding fathers” or elder statesmen of Meiji Japan (1868-1912) who became chief advisers to the emperor with the right to select and recommend prime ministers to the emperor for an appointment. Historians agree that there were nine genrō in total, with two more added in 1912. They originated in the traditional councils of elders (老中 rōjū) common in the Edo period (1600-1868), but the term seems to have been used for the first time by a newspaper in 1892. While the term is linked to the Genrōin (元老院), the legislative Chamber of Elders between 1875 and 1890, the establishment of the genrō was not related to that body or its abolition. Experienced politicians were selected for their services, honoured by the emperor as genkun (元勲, veteran or elder statesman), and asked to act as imperial advisors. The institution was informal and extra-constitutional, and its members had a significant, albeit eventually declining, influence on government policies.

The Meiji leadership was essentially collective, with the genrō intervening as a group in case of leadership crises. All the genrō were samurai of medium and lower rank: eight of them (four each) came from Satsuma and Chōshū, the domains that had played the most prominent roles in overthrowing the Tokugawa shogunate. The only exception was Saionji Kinmochi, who hailed from an aristocratic family.

The first two Meiji leaders to be given the title of genkun in 1889, were Itō Hirobumi and Kuroda Kiyotaka. Five others were similarly honoured later, constituting the original seven Meiji genrō: Matsukata Masayoshi, Ōyama Iwao, Saigō Tsugumichi, Yamagata Aritomo, and Inoue Kaoru. They were also sangi (参議, imperial councillors) from Satsuma and Chōshū who remained in this office when the title, established in 1869, was abolished in 1885. In addition to their positions, they also dominated the ministries in the mid-Meiji years: for most of the years from 1885 to 1900, Chōshū and Satsuma genrō alternated as prime minister; Itō was prime minister three times, Yamagata and Matsukata twice, and Kuroda once. Almost all of them were ministers in more than one ministry or served in other important court offices.

Declining influence of the genrō

Kuroda and Saigō died in 1900 and 1902. The five remaining genrō exercised power indirectly, through their followers. Between 1901 and 1913, Katsura Tarō and Saionji, both protégés of the most powerful genrō, alternated as prime minister. Katsura adhered to Yamagata’s opposition to party government, and Saionji continued Itō’s alliance between bureaucrats and his party, the Rikken Seyūkai. Katsura and Saionji became genrō in 1912, but Itō had died in 1909, and the institution began to decline in importance. Yamagata died in 1922 and Matsukata in 1924, leaving Saionji as the last genrō. He continued to exert influence over the choice of prime ministers until 1937 and died in 1940 at the age of 91.

The Satsuma-Chōshū monopoly of power represented by the genrō stirred much hostility, but until the beginning of the Taishō Period (1912-1926), the genrō served as a stabilising force in Japanese politics and facilitated a peaceful transition from cabinet to cabinet. In 1913, Katsura died, and the party leaders Hara Takashi and Katō Takaaki, more independent of the genrō, took over the political stage. One of the genrō‘s merits was that its members were striving for Japan’s interests, with a broad view and an ambition for the nation, not just for the institution or political faction they served. After the turn of the century, the political influence of the genrō slowly faded. Young politicians started to resent the overcautious and antiquated ways of the elder statesmen. From 1914 to 1916 the genrō openly clashed with Foreign Minister Katō Takaaki over his aggressive stance toward China and Russia; however, the days of the genrō were numbered. In Saionji’s later years, his warnings against confrontational policies were largely ignored.

The Genrōin, the Senate or the Chamber of Elders, was a quasi-legislative body in the early Meiji period, established in 1875 as part of administrative reform of the Dajōkan (太政官, Great State Council) system. The Genrōin replaced the Sain ((左院, Chamber of the Left) and was responsible for the legislative review. Its members, who were theoretically nominated by the emperor, were chosen from the ranks of the peerage, top-level bureaucrats, and jurists. The Minister of the Left (左大臣 Sadajin) and the Minister of the Right (右大臣 Udaijin) served as chairmen. The body had no power to initiate legislation, since bills were delivered to it by the executive section of the Dajōkan, also known as the naikaku (内閣 cabinet), in the form of imperial ordinances. In emergencies, the executive section could itself issue decrees subject only to retrospective revision by the Genrōin.

In 1876, the Genrōin was commissioned to draw up a constitution. The draft, the Tōyō Dai Nippon-koku Kokken-an (東洋大日本国国憲按 Draft of the National Constitution for Japan), completed in July 1880, was rejected by Itō Hirobumi and Iwakura Tomomi as too liberal. The Genrōin was dissolved in 1890 with the formation of the Imperial Diet. Despite being short-lived, it represented, together with the Daishin’in (大心院 Great Court of Cassation), an early attempt by the Meiji government to establish a separation of power. 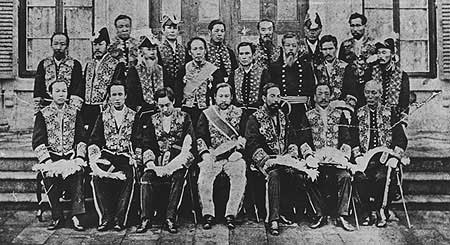 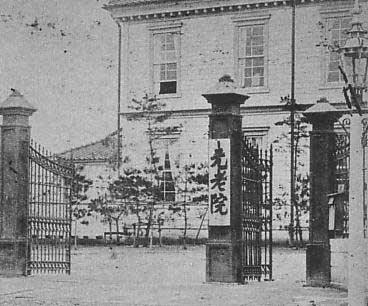 The Genrōin building in Tōkyō